Breaking
Entrepreneurs Are Bringing Transparency To Home Buying And...
Best Incentive To Get Vaccinated: Money, Messaging, Or...
Page Level Query Analysis at Scale with Google...
How A CIO Can Align IT With Business...
Blogger of the Month: Jo, Girl Eats World
6 Things Women In Business Know That Men...
How to Use First-Party Data for Ad Personalization
Pressing Reset—Putting A Fallen Unicorn Back On Its...
How We Went Viral: Promoting Content with Influencers,...
Blame Olympic Record Price Tag For Return To...
Apple iOS 14.5 Release: Should You Upgrade?
How to Come up with Podcast Topics and...
Why Gaming Gear Company Razer Launched A $50...
Technical SEO Implementations to Increase the Impact of...
30 Brilliant Ways to Market Your Eco-Friendly Shopify...
15 Tech Industry Leaders Share Overused (And Misused)...
Home Finance Exclusive: Leak Reveals Surprising Reason Major Bitcoin Exchange Luno Is Adding Ripple’s XRP
Finance

The addition of XRP to Luno’s supported cryptocurrencies, which currently includes just bitcoin, ethereum, and bitcoin cash, will come within the next two weeks, according to a well-placed source.

Luno, previously known as Bitx, decided to support Ripple’s XRP after running a year-long poll of its 3 million-strong user base—with XRP by far the most popular choice, leaked internal slides have revealed.

Luno, which boasts an “A” grade from bitcoin and cryptocurrency comparison site CryptoCompare, asked its users which coin they’d be most interested in buying, excluding bitcoin and ethereum.

Ripple’s XRP came out top with more than twice as many votes as bitcoin cash, a fork of bitcoin that’s currently the fourth-largest cryptocurrency by value, which Luno added in September last year.

Litecoin and stellar, the seventh and 13th digital tokens by value according to CoinMarketCap data, also came in ahead of bitcoin cash, though many were also interested in smaller cryptocurrencies. 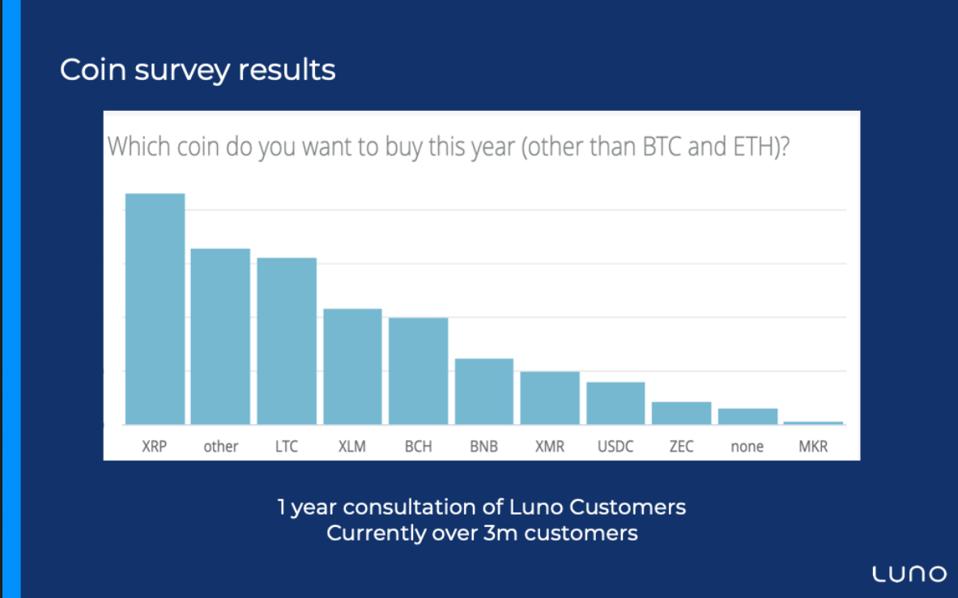 The XRP price has struggled over the last 12-months, with some XRP traders and investors concerned Ripple, the company that created XRP and controls around 60% of it, is driving down the price buy “dumping” tokens onto the market.

In October, Ripple revealed it sold $66 million worth of XRP in the third quarter of 2019–down 74% from sky-high sales of $251 million in the previous quarter.

The price of Ripple’s XRP was boosted last year bitcoin and cryptocurrency exchange Binance, the world’s largest crypto exchange by volume, announced it will be adding Ripple’s XRP and the stablecoin tether as a futures trading pair. 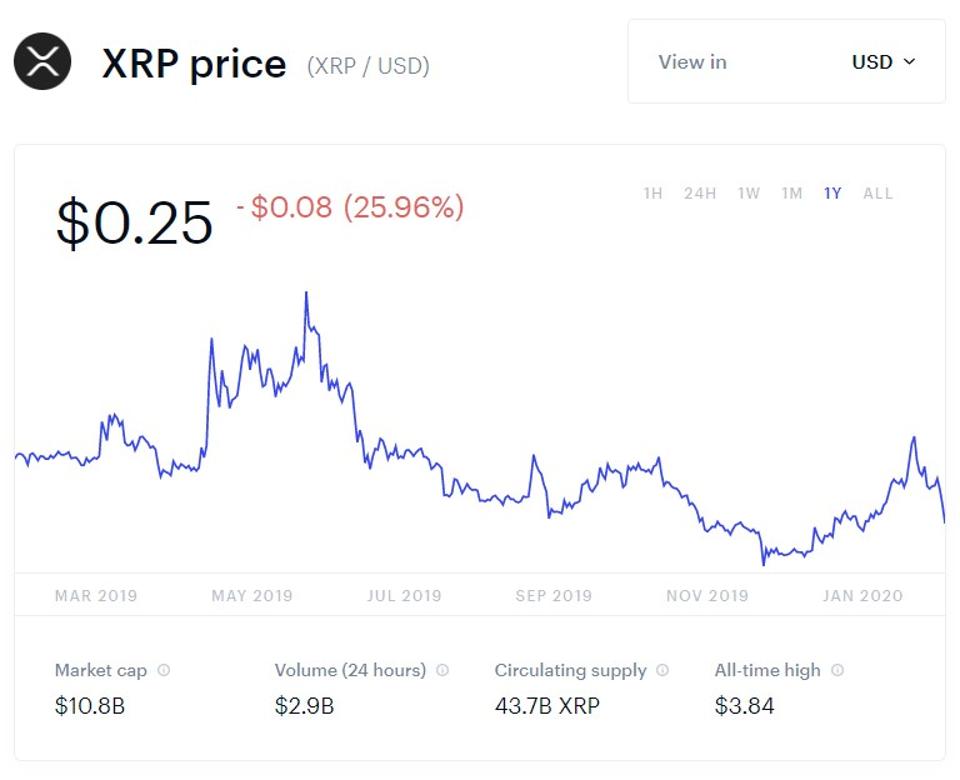 The price of Ripple’s XRP has been on a downward trend for the last 12-months but has recently … [+] staged a slight recovery.

Last year, Ripple’s chief executive Brad Garlinghouse said he expects the company to grow its customer base by 30% to 40% this year, from 300 currently, and boasted transaction volume on the Ripple network will rise more than 600%.

However, the company has had a difficult year as the world’s biggest banks, payment providers and technology companies look to create their own digital tokens.

Ripple’s XRP, one of the oldest bitcoin rivals and the third largest cryptocurrency by market capitalization, has endured many of the cryptocurrency industry’s ups and downs since it was released in 2012, earning its fair share of fans and detractors along the way.

Move Over, AirPods: These Could Be The Best Apple Headphones, Coming Soon

Why Acer And Asustek Lost PC Market Share In 2019