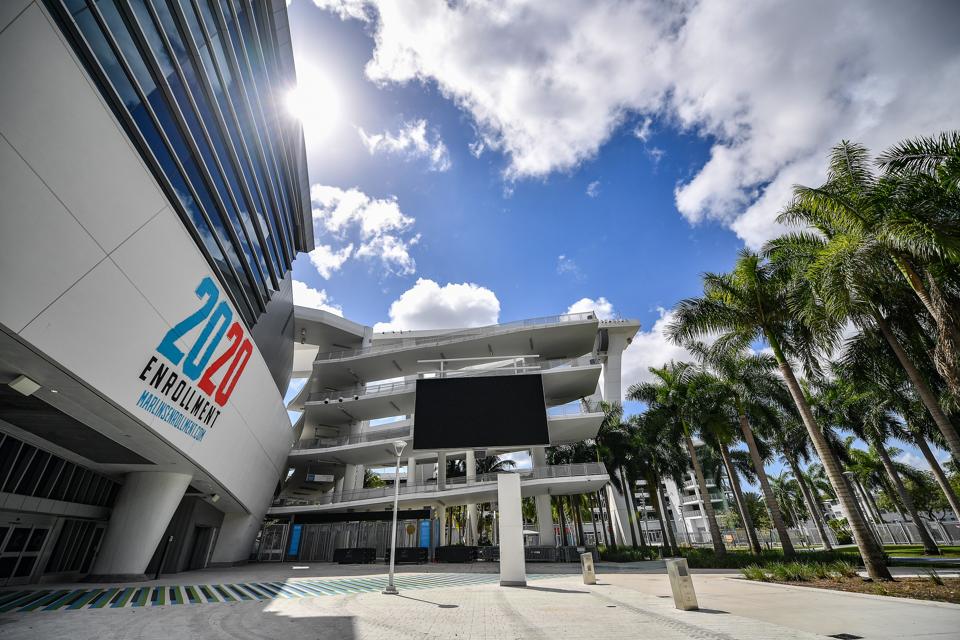 MIAMI, FLORIDA – MARCH 13: A general view of Marlins Park home of the Miami Marlins on March 13, … [+] 2020 in Miami, Florida. Major League Baseball is suspending Spring Training and delaying the start of the regular season by at least two weeks due to the ongoing threat of the Coronavirus (COVID-19) outbreak.(Photo by Mark Brown/Getty Images)

Desperate for cash in the wake of a devastating pandemic that threatens the season, the owners of major-league baseball teams might just pull a financial rabbit out of their collective caps.

For the first time in 22 years, they could expand.

Adding one team to each of the existing leagues would create two 16-team leagues, perfect for four eight-team divisions and a return to the structure that existed during the first half of the 20th Century. It would also provide a semblance of normalcy, ending interleague play and, in the opinion of many baseball purists, restoring integrity to the World Series.

Each expansion franchise would have pay an entry fee in the vicinity of $1 billion – the sale price of the lowly Kansas City Royals last year. The figure could even be higher, as the moribund Miami Marlins went for $1.2 billion in 2017.

The 30 incumbent owners would realize a $50 million windfall if expansion teams coughed up $1.5 billion, a figure not out of the realm of possibility. 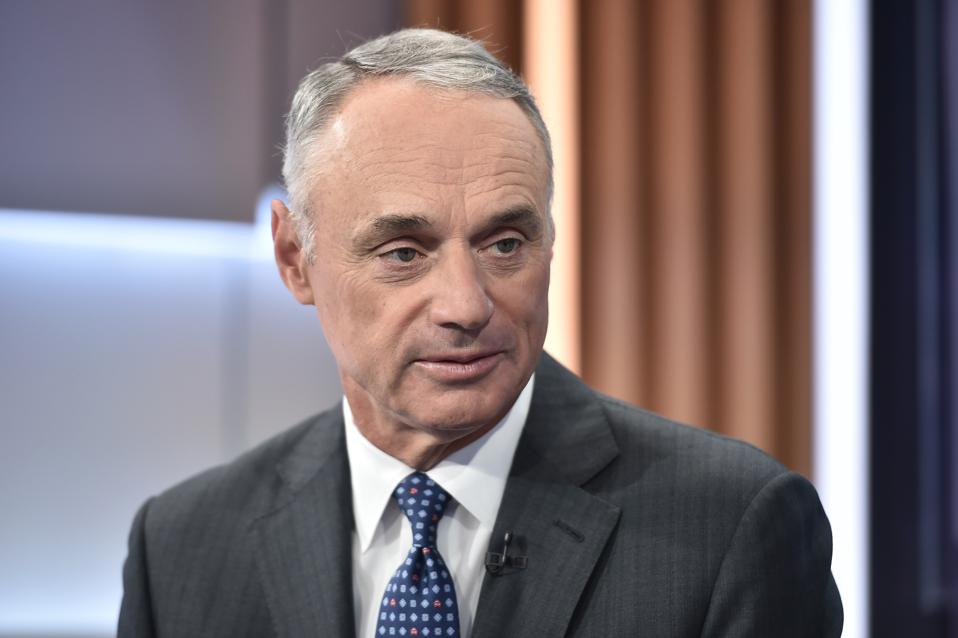 In the wake of that unprecedented development, owners agreed to give players a $170 million grant, designed to cover salaries of major-league players through the month of May, and also granted union members full service time for 2020 – even if no games are played. Player salaries normally begin on Opening Day, which had been scheduled for March 26.

While those figures may seem astronomical to the typical sports fan, they’re not.

Consider the fact that Major League Baseball made an estimated $11 billion last season, much of it through advertising and broadcasting contracts, but a big chunk of it from fans who went to games, paid for parking, bought souvenirs, and consumed ballpark food.

That’s where expansion comes in.

Before 1961, the American League and National League had eight teams each. Seeking to bring the game cross-country, the majors created 10 new teams from 1961-77, then four more over a five-year span that started in 1993. 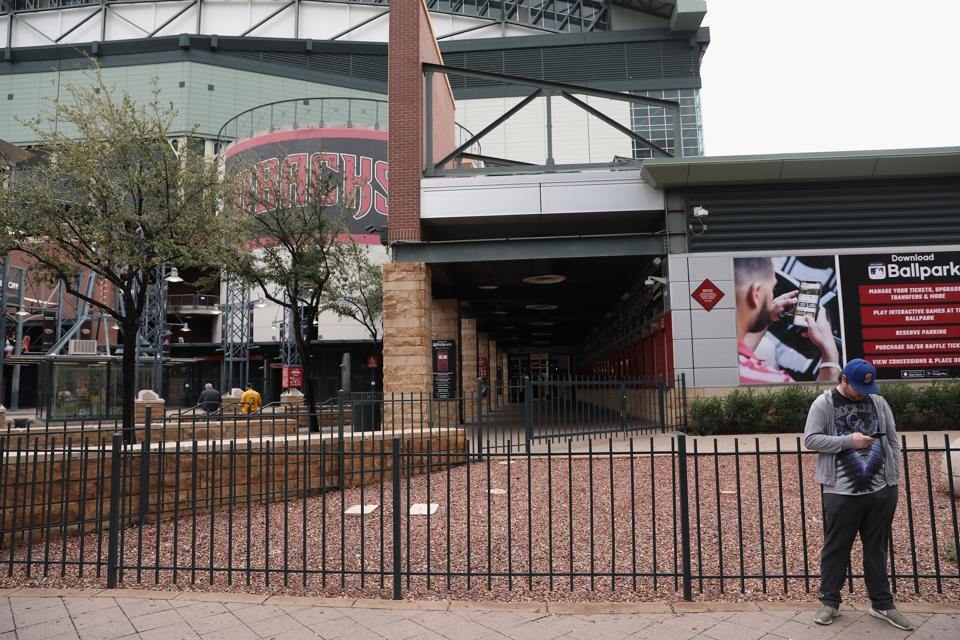 PHOENIX, ARIZONA – MARCH 12: A fan stands outside Chase Field, home of the Arizona Diamondbacks, … [+] is shown on March 12, 2020 in Phoenix, Arizona. Many professional and college sports are canceling or postponing games due to the ongoing Coronavirus (COVID-19) outbreak. (Photo by Christian Petersen/Getty Images)

The most recent additions, the Tampa Bay Rays and Arizona Diamondbacks, paid $130 million entry fees plus an additional $25 million each in forfeited revenue. Those funds helped existing clubs pay a $280 million fine for colluding to suppress free-agent salaries from 1985-87.

The current situation is quite different, with all sports shuttered by the highly-contagious COVID-19 and several cities banning public gatherings for months.

Just this week, Toronto did just that, putting the kibosh on group meetings through June 30.

As a result, Major League Baseball might follow the lead of professional leagues in Japan, Korea, and Taipei, where competition begins this month but will be held without spectators.

Playing without fans, even if games are televised and sponsored, will pose another financial hit to the clubs.

At the moment, with a starting date far from certain, a variety of ideas has hit the drawing board. The National Football League has already expanded its schedule and playoff format, while Major League Baseball is considering pushing its schedule deep into autumn, perhaps playing games in warm-weather sites or cities with domed stadiums. 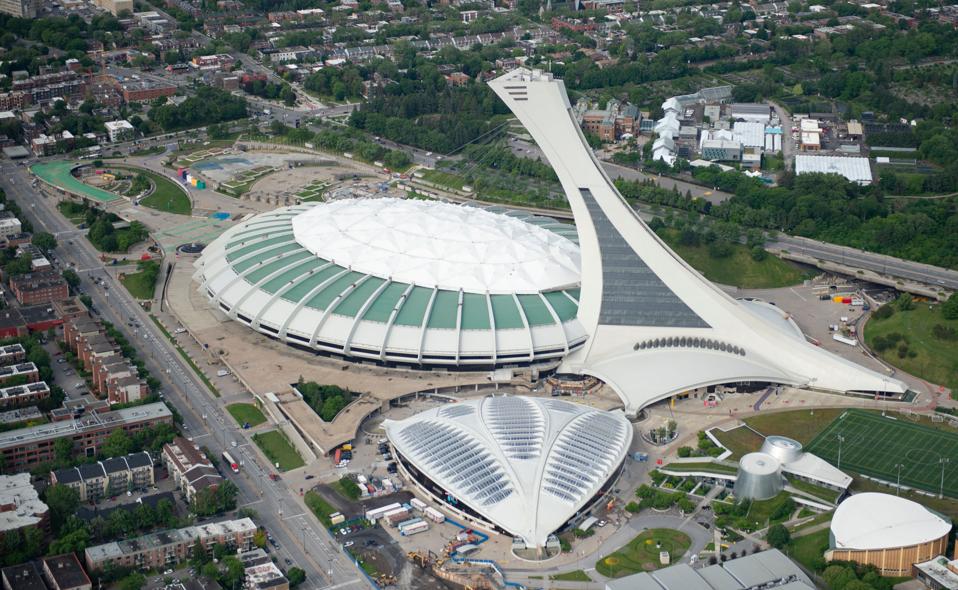 An aerial photo of the Montreal Olympic Stadium is viewed on June 21, 2019 in Montreal, Quebec, … [+] Canada. (Photo by Sebastien St-Jean / AFP) (Photo credit should read SEBASTIEN ST-JEAN/AFP via Getty Images)

Two long-rumored expansion targets that already have domes, New Orleans and Vancouver, B.C., could actually wind up auditioning for permanent spots on the major-league map. Montreal, which had the Expos for 36 years before they became the Washington Nationals in 2005, also hopes to be considered again but must build a new downtown ballpark first.

Existing but much-maligned Olympic Stadium, which also has a dome, could be used on a temporary basis – but could instead host the attendance-challenged Tampa Bay Rays in a unique international sharing of an existing franchise.

Owners, team executives, league officials, and interested cities have plenty of time to talk while the game is on hold.

If And When The NBA Returns, Centralizing In Las Vegas Makes A Lot Of Sense