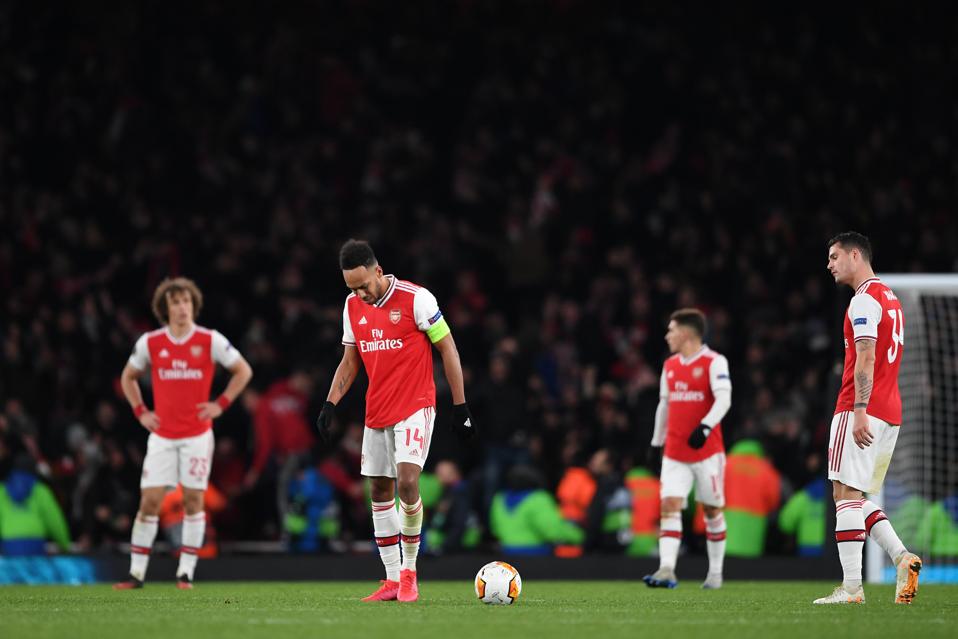 Arsenal players react to a late second and decisive goal against Olympiacos in the Europa League. … [+] (Photo by Harriet Lander/Copa/Getty Images)

Arsenal fans took to social media on Saturday to glory in Watford’s 3-0 win over Liverpool. The result ensured that Arsenal’s undefeated season of 2003/04 would not be equaled and it also stopped Liverpool’s unbeaten run at 44 top-flight games – 5 short of Arsenal’s record.

However, it was a bit like celebrating finding a cherry on a turd.

Arsenal had a horrendous week. Knocked out of the Europa League by Olympiakos on Thursday, and late on Friday the financial results for Arsenal Holdings Limited were posted.

You might remember that at the start of December Arsenal posted results showing an after tax loss of £19m. Much was made in the papers and on blogs that Arsenal’s match day receipts had dropped by an incredible £30m – from £99m to £69m.

But as was explained in this article, it was too early to jump to conclusions. The document made public in December was for Arsenal Football Club rather than Arsenal Holdings and the financial performance of the latter is regarded as a better gauge of the entities performance.

What’s more, the notes to the Arsenal Football Club report specified that the drop of match day receipts was just a timing issue between subsidiaries, rather than a real reduction in revenue.

But as it turned out the performance of Arsenal Holdings wasn’t any better; in fact it was worse. Although the £30m in match day revenue found a way home, costs were even higher and Arsenal Holdings posted an after tax loss of £27m.

A year ago Arsenal Holdings posted an after tax profit of £56.5m – a stunning £84m reversal.

Arsenal’s decline can be captured in a just a few metrics. 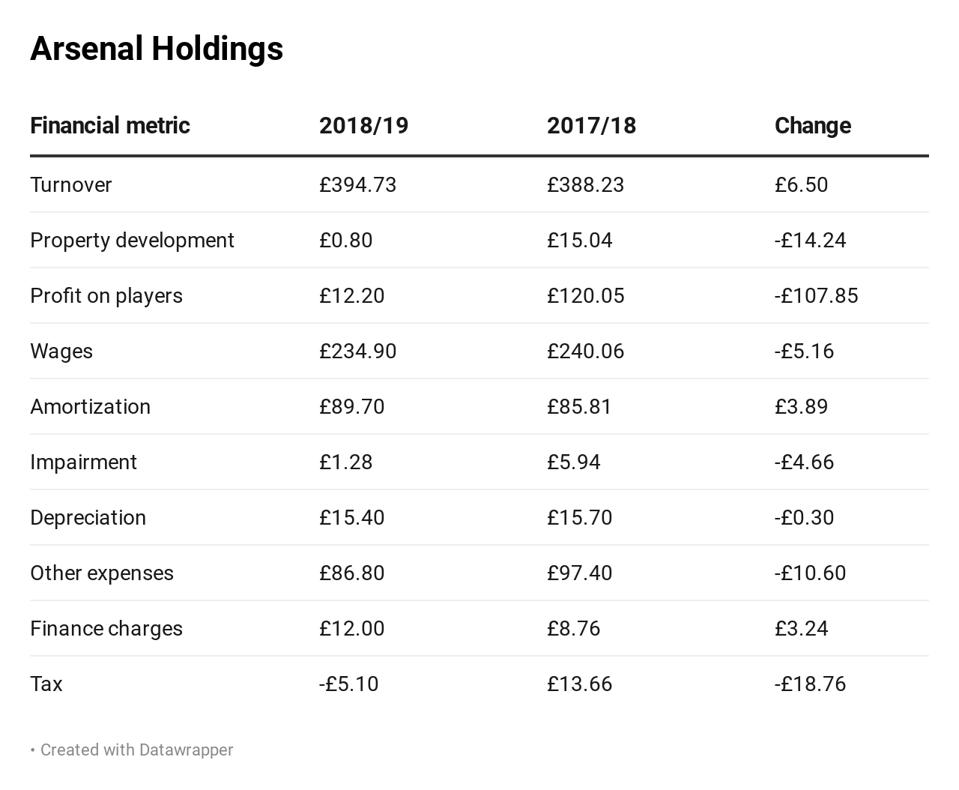 Arsenal’s profitability since 2002 has been build on three pillars:

However, the pillars have been shaken and are no longer stable.

The Champions League has given way to the Europa League with a resulting drop in revenue. Property Development turned into a very tidy sideline for a decade or so, but it has run its course.

Last but not least, Arsenal, after a house cleaning in 2017/18 has been trying to strengthen the squad rather than selling players.

However, it is clear that Arsenal cannot outrun the cold financial reality. Arsenal need a new business and financial model and quickly.

It looks ominous for Arsenal.

Missing out on Champions League money over the last two years – and this season – has cost Arsenal in excess of £130m. Now, there is the distinct possibility that Arsenal will miss out on the Europa League in 2020/21.

The loss to Olympiakos in the round of 32 means that Arsenal will see a reduction of at least £8m in UEFA prize money from last season. Missing out completely in 20/21 will see an additional reduction of over £25m.

Add to that the strong possibility of less money from the Premier League as they slip down the table, and the words “financial crisis” isn’t hyperbole.

Selling players is the only viable short to medium term option if the team is looking to mitigate at least some of the red ink, let alone balance the books.

2020 Google Search Survey: How Much Do Users Trust Their Search Results?