Breaking
Don’t miss out on a seasonal marketing boost
How to start and register a company in...
The best places to host a business breakfast...
Everything You Need To Know About CBD Balm
How to Ensure Your Business Thrives From Day...
The Top 5 Best Internal Communications Tools for...
Tips On Preparing Your Business For Summer
How commercial storage can help you keep your...
Great Ways to Get Your Workers Involved in...
How online casinos have changed over the years
Is Your Office as Eco-Friendly as You Think?
Hair Extensions – What you should know about...
How to Create a Successful Career in Business
What happens if your employee is injured at...
How Does A Virtual Business Address Work? Everything...
Introducing Direct.Me the new Link In Bio service
Home Business Exxon Knew. Did They, Though?
Business 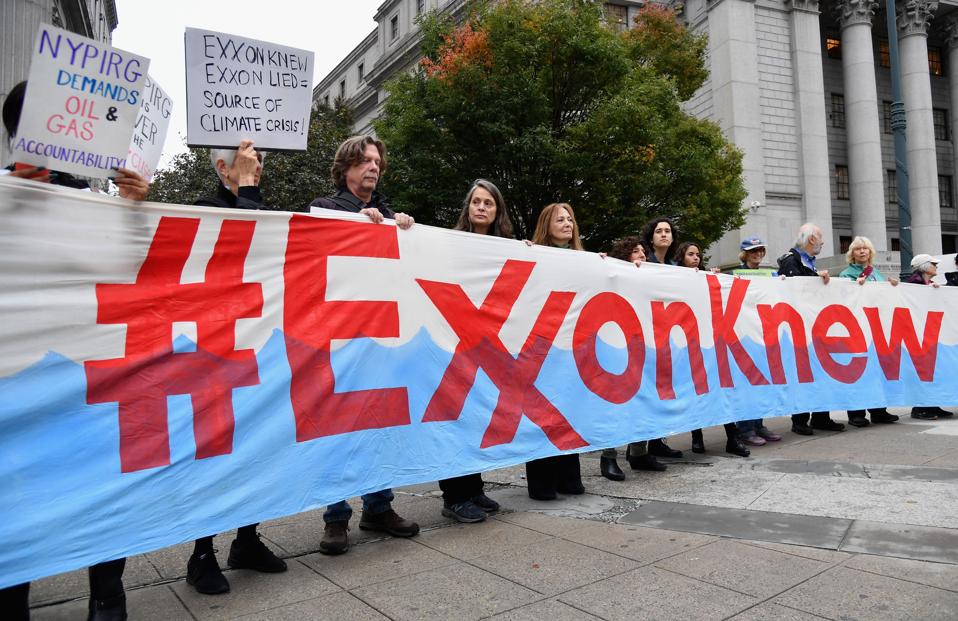 Climate activists protest on the first day of the Exxon Mobil trial outside the New York State … [+] Supreme Court building on October 22, 2019 in New York City. – Charges that Exxon Mobil misled investors on the financial risks of climate change will be heard in court after a New York judge gave the green light for a trial. (Photo by Angela Weiss / AFP) (Photo by ANGELA WEISS/AFP via Getty Images)

When I worked for the oil industry, I began to see things differently from the inside. The image in my mind of “Big Oil” began to be challenged immediately through personal experience. To this day, I see many issues quite differently than some who only view the oil industry from a distance.

I learned that there are people who spend their entire oil company careers working on alternative fuels. This was an area I was involved with for several years when I worked for ConocoPhillips.

I learned that many people work in silos. Someone who works in refining may not know the first thing about oil production. Someone in oil production might not have a clue how gasoline is produced. A pipeline worker might be oblivious to the factors that impact gasoline prices.

Thus, the things I have seen frame my opinion of the current climate change investigations involving ExxonMobil. To recap, the company is under investigation by several states, and is being sued by the state of New York, which charges that the company engaged in “a longstanding fraudulent scheme” on the the economic risks of climate change.

A key point of contention is that in 1977, James Black, a senior scientist at (then) Exxon did warn: “In the first place, there is general scientific agreement that the most likely manner in which mankind is influencing the global climate is through carbon dioxide release from the burning of fossil fuels.”

For many people, that’s conclusive proof that “Exxon knew.” But here’s where my inside viewpoint thinks it’s not that simple. There is always an enormous amount of research going on inside a major oil company at any particular time. I have been involved in some of it. I have presented my findings to management, just as James Black did. The thing is, management may not agree with those findings. And that’s what ExxonMobil has argued.

That might seem like a ludicrous notion, but consider that in the 1970s the public had been bombarded with messages that the world was cooling. In 1970, the Washington Post published “Colder Winters Held Dawn of New Ice Age.” In 1974, Time published “Another Ice Age?” and in 1975 Newsweek published “The Cooling World.” There were numerous articles and scientific papers throughout the 1970s that argued that the world was cooling, not warming.

You could argue that ExxonMobil should have been wise enough to listen to Black and conclude that he was right, but the notion of a warming world was certainly not mainstream science at the time. You can say “They had incentive not to believe those findings.” And I wouldn’t argue either point. But there wasn’t nearly the kind of consensus in 1977 that we have today, which is why I don’t think Black’s argument is the smoking gun some believe.

Someone inside an oil company making a warning about something doesn’t automatically equate to “The company knew.” I had research that wasn’t accepted by management. I thought they were wrong. But it would be wrong of me to later claim “The company knew.” Most of the company never heard anything about it.

The other thing I would point out is that private companies don’t typically publish their research publicly. Beyond the patents I received while working there, my research papers are still in the archives at ConocoPhillips. The public is unlikely to ever see those papers, because companies are competing against each other. ExxonMobil doesn’t necessarily want Chevron to know what it is working on.

Finally, you might argue that regardless of what ExxonMobil did or didn’t “know”, they have spent years funding anti-climate change organizations. I would agree that this is true. But again, that’s not necessarily because they are trying to hide something from the public. In my experience, it’s because there is a general disbelief of climate change within the oil industry (and on the right side of the political spectrum, which is where most oil industry employees reside).

When I first went to work in the oil industry in 2002, there were plenty of people who thought I had lost my mind if I tried to talk about climate change. There was sincere disbelief. Some have sincere disbelief to this day, although I think that diminishes a bit each day.

But put it all together, and it’s not at all surprising that in 1977 Exxon management might reject a warning from one of its scientists that rising carbon dioxide emissions were going to pose a problem. It certainly wasn’t widely accepted at that time, and we have the benefit now of 40 years of hindsight. That’s why whenever someone says “Exxon knew”, I respond “Did they though?”

Have Your Agency’s Clients Considered a Local Product Kiosk? Google Has.

Don’t miss out on a seasonal marketing boost

Everything You Need To Know About CBD Balm

How commercial storage can help you keep your...

Great Ways to Get Your Workers Involved in...

How online casinos have changed over the years

Hair Extensions – What you should know about...

How to choose the right accounting package for...