On the heels of one of the worst months on record for new car sales, shares of online used-car vendor Carvana are on an unlikely tear. The stock surged 30% over the past week, closing Friday back near its all-time high in late February.

Boosted by the growing appeal of virtual car-shopping amid a rush of positive analyst sentiment, Carvana’s swift rebound has lifted the fortunes of the billionaire father-son duo behind the eight-year-old firm by more than $2 billion since last Friday, May 1.

Tempe, Arizona-based Carvana’s controlling shareholder Ernest Garcia II ended the week with a $6.7 billion net worth, jumping $1.5 billion from a week prior. Meanwhile, his son, Carvana President and CEO Ernest Garcia III, is now worth $2.8 billion, up $700 million over the same period. The two own about 38% and 18% of Carvana’s stock, respectively.

After shares collapsed by more than 70% from mid-February through mid-March, Carvana has been on an upswing. But Wednesday after markets closed, the firm reported a larger-than-expected first-quarter loss of $184 million, and shares tumbled in after-hours trading, opening Thursday down 7%. That morning, however, Carvana announced it was expanding its “as-soon-as-next-day touchless home delivery” to 100 additional cities across 24 states, and shares quickly popped, recouping all their losses by noon and ending the day up 10%.

During the earnings call on Wednesday, Garcia III detailed a similar rollercoaster ride for the firm’s sales as a result of the coronavirus pandemic. He said Carvana saw a significant drop in sales in the latter half of March that continued into early April, with revenue in the period down 30% year-over-year. But a reversal of fortune quickly followed; sales soared in the weeks since, eclipsing last year’s figures by as much as 30%, according to the CEO.

“It is difficult to get clear visibility into exactly how the industry performed over the last several weeks but every indication is that Carvana has outperformed the industry quite significantly and grown our market share accordingly over this period,” Garcia III said during the earnings call. “We don’t yet know how precipitous these customer preference changes will be, but we are optimistic.”

Garcia III launched Carvana in 2012, initially building it as a subsidiary of his father’s used car dealer, DriveTime. Billing it as the “Amazon of cars,” the younger Garcia spun Carvana out of DriveTime in 2017 in an IPO that raised $225 million. Its shares are up ten-fold since. 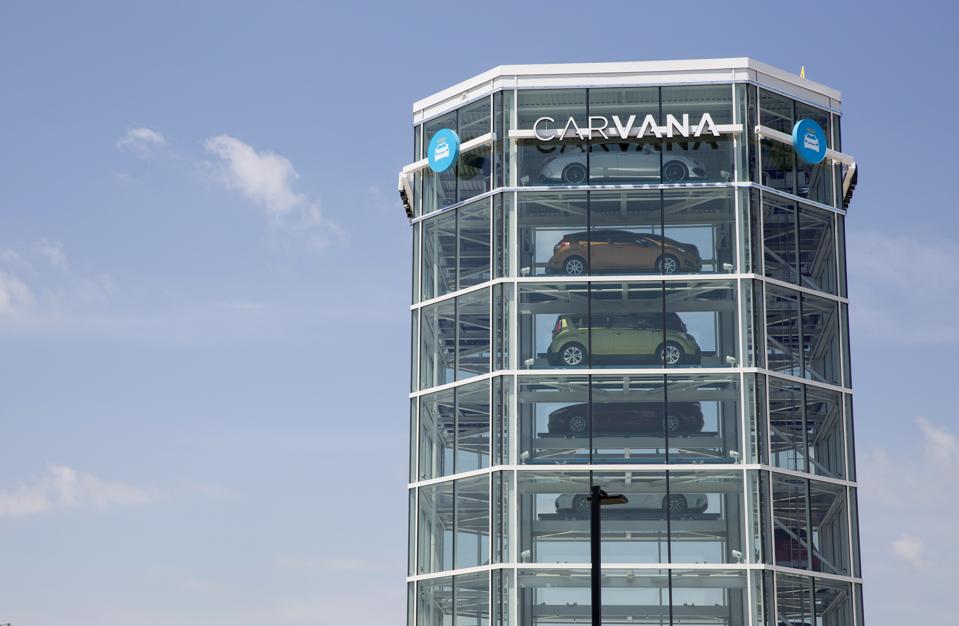 Vehicles sit inside one of Carvana’s car vending machine in Frisco, Texas. There are 24 across the United States, all serving as pick-up locations for vehicles purchased from Carvana online.

It remains unclear whether the bullish investor sentiment will last — especially as competitors bolster their online selling efforts. Carvana successfully raised $600 million in a direct offering on April 1 in an effort to prop up its balance sheet while revenue plummeted. It also reduced employee hours to cut costs (top executives ceded their salaries to offset lost wages for those affected). Bloomberg Intelligence analyst Kevin Tynan wrote in a note after the firm’s first-quarter earnings that Carvana’s “still-tenuous financial basis will likely ratchet up” as broader demand for autos remains low. A representative for Carvana did not return a request for comment on Friday.

Most analysts, however, seem to mirror Garcia’s optimism. Half of the 22 Carvana analysts polled by Bloomberg have issued a buy rating on its shares, and all but two of the rest recommend investors hold onto the stock.

“Brick-and-mortar dealer checks indicate that Carvana is better off than the rest of the industry,” Needham analyst Brad Erickson wrote in an April 28 research note that reiterated a buy rating on Carvana shares, adding that the firm, which offers financing to its customers, benefits from a scarcity of online used-car loans, as well as consumers who are increasingly seeking out online buying options. “We anticipate brutal second-quarter numbers, but when the world begins approaching normal again, we expect Carvana’s share gains… to show meaningful progress.”

Alessio Rastani On The State Of U.S. Stocks...