Breaking
‘Remnant: From The Ashes’ Is Cheaper Than Ever...
Top Stocks To Buy Today As Markets Rise...
How To Sell Artisanal Ice Cream In The...
Making America’s Trumps Pay Their Fair Share
Fortnite Season 4, Week 9 Challenges Revealed And...
Yesterday You Were Just A Business; Today You...
Should Your Company Help Get Out The Vote?...
Hyperautomation And What It Means For Your Business
The Role Of The Indie Agency In Our...
Parker-Hannifin Crosses Pre-Covid Peak But Investors Set To...
6 Reasons Your Cold Messaging Efforts Fail And...
4 Analytics Categories To Track To Improve Your...
Predictions 2021: Cloud Computing Powers Pandemic Recovery
This Is Why You Need A Strategy In...
Economic Research Exposes Significant Flaws In DOL H-1B...
How Breast Cancer Turned This Entrepreneur Into A...
Home Business FC Barcelona Ask Neymar To Say ‘No’ To Transfer Amid Coronavirus Financial Difficulties
Business 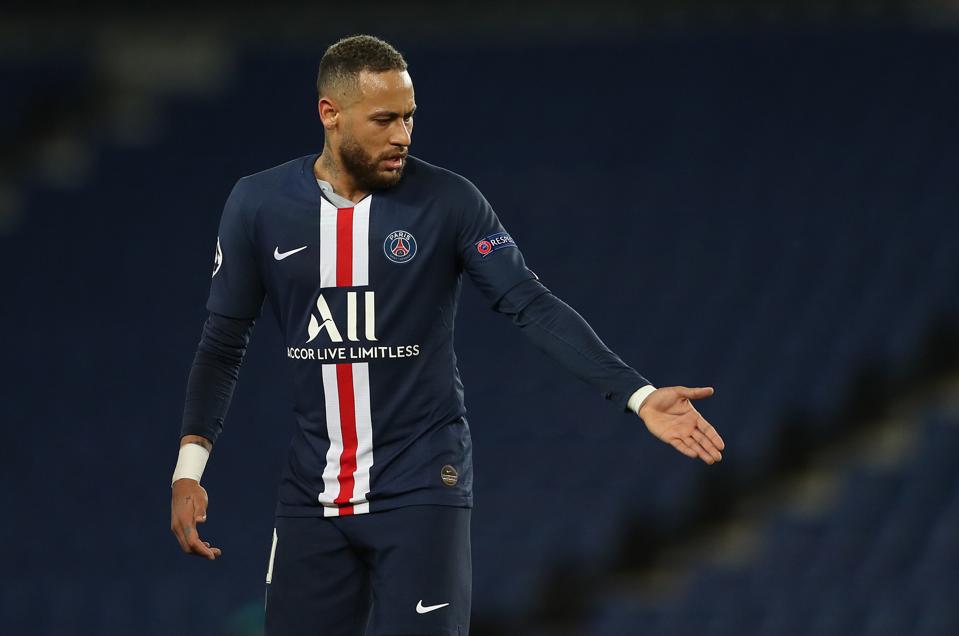 PARIS, FRANCE – MARCH 11: (FREE FOR EDITORIAL USE) In this handout image provided by UEFA, Neymar of … [+] Paris Saint-Germain reacts during the UEFA Champions League round of 16 second leg match between Paris Saint-Germain and Borussia Dortmund at Parc des Princes on March 11, 2020 in Paris, France. The match is played behind closed doors as a precaution against the spread of COVID-19 (Coronavirus). (Photo by UEFA – Handout/UEFA via Getty Images)

A reunion did not get off the ground in 2019, but this has not deterred Neymar and his former club FC Barcelona from attempting to join forces once more this summer.

At the turn of the year, Mundo Deportivo ran a report that detailed how by utilizing FIFA’s unique Webster Ruling, the Brazilian could don Blaugrana colors again providing that he did not agree to fresh terms with PSG in the meantime.

His fee would be set at $200mn in these circumstances. Yet, in a remarkable turn of events, rival publication SPORT claims on Wednesday morning that Barça have asked Neymar to say ‘No’ to this suggested method of acquiring him, and therefore should not press ahead by requesting the move directly with soccer’s lead commissioning body.

According to Joaquim Piera, this change of approach has been influenced by factors related to the ongoing coronavirus pandemic and the financial impact it has had on the club, while it is believed that spending such money could have a “boomerang effect” for the Catalan outfit.

The proposal of 70% pay cut to the first team players’ salaries already turned down, Piera’s colleague Albert Masnou relayed a point made by locker room rebels yesterday in writing that they “don’t understand why president Josep Maria Bartomeu should turn to them when the club has made economic investments in transfers that, they believe, do not make any sense or contribute anything to the club”.

“If the proper management of resources has not been undertaken, they do not understand why they must pay for it,” it was added.

Additionally, it is also feared that Barça’s global reputation could be damaged during a time when the “planet is suffering with a pandemic that is collapsing the health systems of many countries and that is also going to impoverish the world as a whole.”

“Barça will go to the market and sign,” Piera insists, “but not with sums that generate social rejection.

Yet again, then, as was suggested when ESPN’s Sam Marsden and Moises Llorens broke a story detailing that the club will have to choose between signing Neymar or Inter Milan’s Lautaro Martinez, but not both, it is perhaps only through a separate part-exchange deal that they can land their targets. Or at least Neymar.

PSG and Barça have been in rare agreement over slashing salaries, and might be just as image-conscious. Julien Laurens alleging that sporting director Leonardo placed his compatriot on the market for $167mn almost a fortnight ago, less money can change hands if the likes of Philippe Coutinho and Ivan Rakitic, or even Antoine Griezmann, head in the opposite direction to the Parc des Princes.

As a result, both parties would be left with agreeable reinforcements for their 2020/2021 campaigns with their reputations intact.