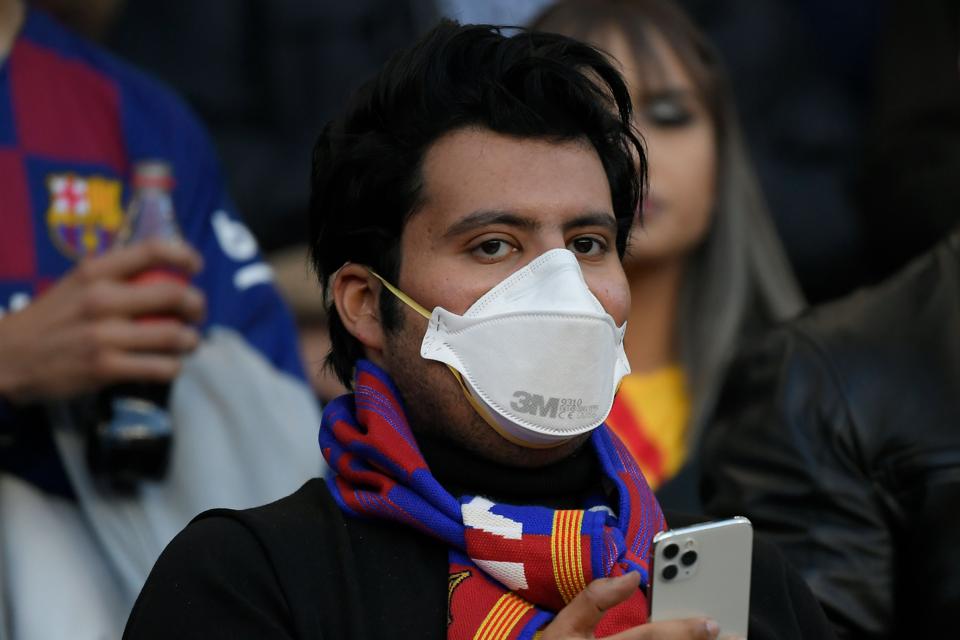 A man wearing a protective mask in light of the coronavirus outbreak waits for the start of the … [+] Spanish league football match between FC Barcelona and Real Sociedad at the Camp Nou stadium in Barcelona on March 7, 2020. (Photo by LLUIS GENE / AFP) (Photo by LLUIS GENE/AFP via Getty Images)

A first case of COIVD-19 has been recorded at FC Barcelona amid the global coronavirus pandemic, a report has claimed.

According to La Vanguardia, a leading Spanish daily newspaper, the head of the club’s medical services Ramon Canal has tested positive while the medical manager of its handball division, Josep Antoni Gutiérrez, has also been affected by the disease.

As relayed by SPORT, both men are currently hospitalized in order to recover, as their country is currently the fourth most affected in the world from the virus and second only to Italy in fatalities.

Attending their last training session on March 13, no member of the first team squad has been physically affected yet to common knowledge.

Like the rest of the general population in Spain, they too are currently on a government imposed 15-day lockdown set to be doubled in the coming days, and are continuing their training at home under the orders of club staff.

But there has been a considerable financial impact, which sees some players at loggerheads with the board over a proposed 70% pay cut.

Matchday revenues no longer forthcoming since a postponement to La Liga and the Champions League, the doors of the club’s museum, which receives thousand of daily customers, have also been closed.

As SPORT’s Albert Masnou writes however, they, the rebels that have rejected the proposal “don’t understand why president Josep Maria Bartomeu should turn to them when the club has made economic investments in transfers that, they believe, do not make any sense or contribute anything to the club”. “If the proper management of resources has not been undertaken, they do not understand why they must pay for it,” it was added.

Also as a consequence of these developments, Barça will not be able to pursue their previously outlined transfer targets and will have to choose between either Neymar or Lautaro Martinez heading into the 2020/2021 campaign.

The Brazilian previously available in utilization of the Webster Ruling, it has been attested this morning that the club will no longer pursue the $200mn signing as it could damage Barça’s global reputation during a time when the “planet is suffering with a pandemic that is collapsing the health systems of many countries and that is also going to impoverish the world as a whole.”

“Barça will go to the market and sign,” journalist Joaquim Piera insists, “but not with sums that generate social rejection.”

Lessons Learned During The Summer Of White Claw

COVID-19 Reminds Us Why Innovation Is Often A...

Working From Home? Your Home Offices Expenses Are...

Voters Believe Obama Would Be Better Than Trump...

Against The Tide Of Humanity: India Proceeding With...