Breaking
Parrot Plumage Color May Be Linked To Body...
Recent Precious Metals Dip A Buying Opportunity
Looking For Venture Capital? Here’s How One 50+...
Growing Your Retirement Money Using 401(k) Dollar-Cost Averaging
Wellness Exec Abby Miller Levy Partners With Venture...
Microsoft Teams Issues Strike To Zoom With Tidal...
What’s Coming For The S&P 500 In October
4 Ways You Can Showcase Empathy With Your...
A $22,000 Microsoft Surface Will Soon Be For...
Zooming In – Should SMEs Invest In The...
iOS 14: The Surprising Security Risk Of Sharing...
How A Break From Lord Sugar Changed The...
Sunday’s Google Doodle Is Actually About Google
Office Of The Comptroller Of The Currency Chief...
Source Code For Multiple Windows Operating Systems Publicly...
Why Forgettable Pfizer Really Is A Great Value...
Home Business FC Barcelona Versus Napoli Preview, Team News And Starting Lineup
Business 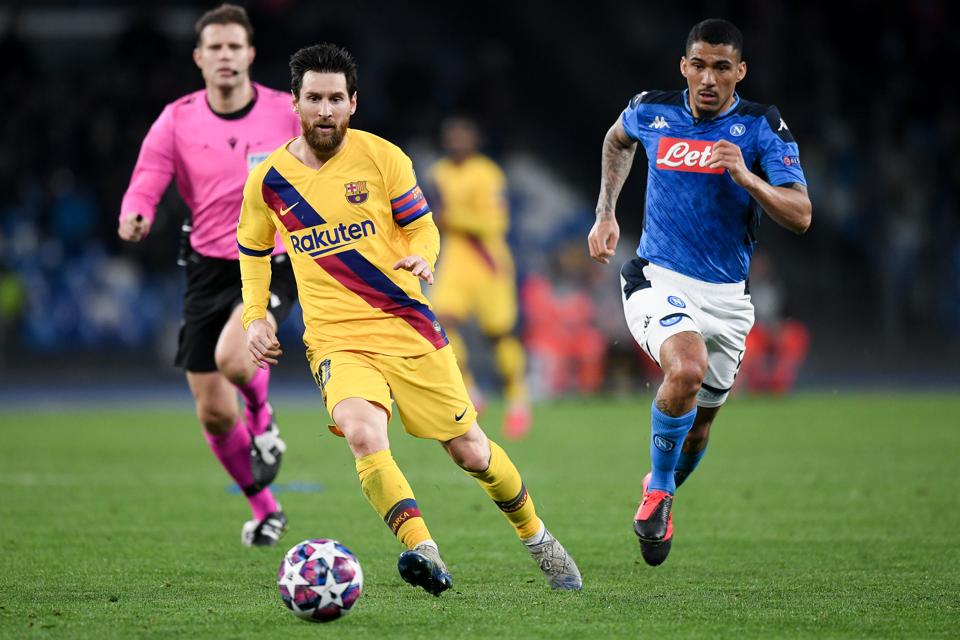 Lionel Messi of Barcelona is followed by Allan of SSC Napoli during the UEFA Champions League Round … [+] of 16 match between Napoli and Barcelona at Stadio San Paolo, Naples, Italy on 25 February 2020. (Photo by Giuseppe Maffia/NurPhoto via Getty Images)

Here it is, then. “The moment of truth,” as the local press have dubbed it.

On Saturday at the Camp Nou, FC Barcelona begin a quest to guarantee that 2019/2020 does not finish trophyless by resuming their Champions League campaign.

Before them, in a last 16 second leg tie, stand a game Napoli who held the Catalans to a 1-1 draw at the Stadio San Paolo on February 25.

Thanks to Antoine Griezmann’s equalizer, Barça nurse an away goal advantage yet are beset by injuries and suspensions meaning coach Quique Setien can call on the services of just 13 senior team members in his matchday squad.

The fitness of the mentioned Frenchman himself has been touch and go, but both of Catalonia’s big sports newspapers have him starting up top with Lionel Messi and Luis Suarez.

The marked difference, however, is that SPORT believe the Blaugrana will set up in a 4-3-3 and Mundo Deportivo think Setien is destined to opt for the 4-3-1-2 that worked so well away at Villarreal in La Liga recently.

And in addition to this, a pivot Ivan Rakitic standing in for the sanctioned Sergio Busquets behind Frenkie de Jong and Sergi Roberto, meaning Riqui Puig still awaits his Champions League starting debut.

In the 4-3-3, Griezmann is placed on the left with Suarez in the center and Messi manning the right wing.

As part of a 4-3-1-2, though, the Ballon d’Or winner drops back to provide central attacking midfield support to a pair of strikers.

Speaking to the press yesterday, Busquets claimed that he and his teammates are facing the challenge that lies ahead of them “with great optimism”.

“We have had [some] days to prepare for the game and we know that anything can happen. It is the return [leg], with a [1-1] draw in the first leg, but we will go for [it in] the game and [stay] true to our philosophy,” vowed the Spanish veteran.

“Playing always gives you the extra pace, but other things can be improved,” he explained further of purported ring rust. “The game is going to be complicated. We aspire to [deliver] much more, to control the game and attack and score goals. In the end the goals count.”

How To Watch Or Live Stream UFC On ESPN+ 32: Derrick Lewis Vs. Aleksei Oleinik