Federal prosecutors have a difficult job and awesome responsibility. Their job, when done properly, involves convincing a judge and/or jury that an individual has not only committed a crime but, as a result, should have their freedom taken away (prison). We trust that prosecutors not only protect us from the “bad guys” but that they also do it by playing within the rules. When they don’t, they need to be called out for it. Based on a few cases in Boston, we need to start asking some questions about the US Attorneys Office in the District of Massachusetts. 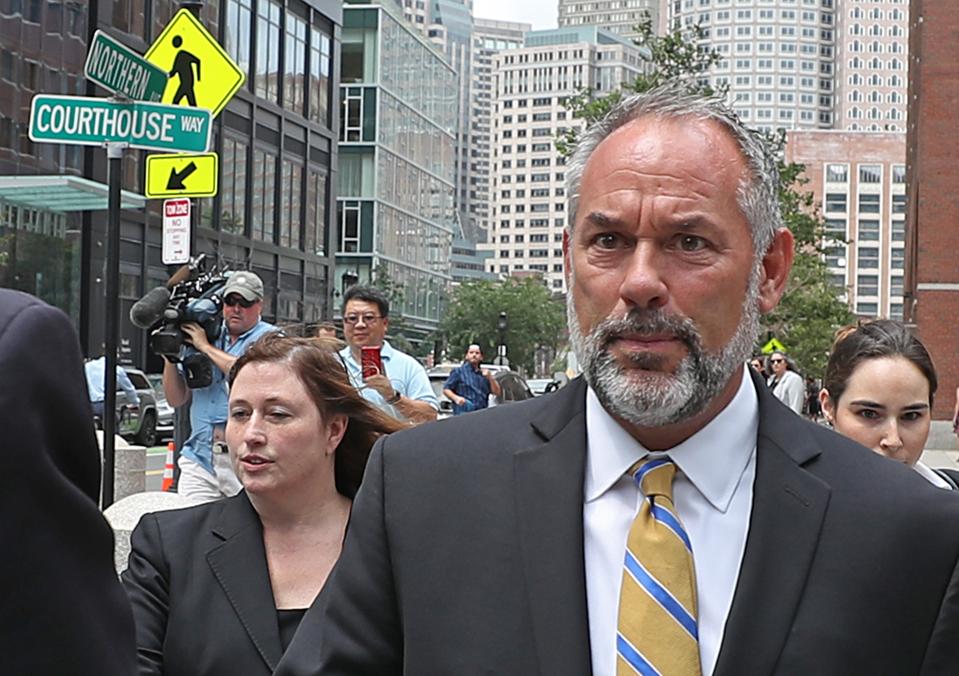 BOSTON, MA – AUGUST 7: Kenneth Brissette leaves the John Joseph Moakley United States Courthouse in … [+] Boston following his conviction on charges of conspiring to extort Boston Calling founders on Aug. 7, 2019. Two Boston City Hall officials have been convicted of conspiring to extort the founders of the Boston Calling music festival, federal prosecutors said. Kenneth Brissette, the citys director of tourism, and Timothy Sullivan, chief of intergovernmental affairs, were charged in US District Court in Boston with illegally pressuring Crash Line Productions into hiring nine members of a stagehands union to please Mayor Martin J. Walsh, a former union leader with close ties to organized labor. Jurors, who had deliberated for only a few hours, convicted Brissette of both charges he faced – Hobbs Act conspiracy and Hobbs Act extortion, according to US Attorney Andrew Lellings office. Sullivan was convicted of Hobbs Act conspiracy but acquitted of Hobbs Act extortion. (Photo by David L. Ryan/The Boston Globe via Getty Images)

Once a person is indicted in a federal case, nearly 95% of those defendants plead guilty rather than go to trial. Of those 5% who take their chances at trial, 90% of the time prosecutors prevail. So what’s up with the string of losses in the federal District of Massachusetts?

On August 7, 2019, a jury convicted Boston tourism chief Kenneth Brissette and city head of intergovernmental affairs Timothy Sullivan on Hobbs Act conspiracy charges arising from their interactions with Crash Line Productions, the company that produces Boston Calling music festivals. Brissette was additionally found guilty on a Hobbs Act extortion charge while Sullivan was acquitted on the extortion charge. The government’s theory was that Brissette and Sullivan had threatened permits for Crash Line that were needed for the September 2014 festival and had explicitly threatened a disruptive picket of the popular Boston Calling festival unless they hired union stagehands. After the convictions, attorneys for Brissette and Sullivan asked for dismissal under Rule 29 Motion for Acquittal, allowing the judge to set aside the verdict even if a jury has found the defendant guilty.

On February 12, over six months after the verdict, US District Judge Leo T. Sorokin ranted the Rule 29 and overturned the jury verdicts. Brissette and Sullivan walked free. US Attorney Andrew Lelling issued a short, terse statement on the decision, “An impartial jury, following legal instructions written by the Court, voted unanimously to convict these two men. We are disappointed by this decision and will review our options.” This was a far cry from Lelling’s unrestrained enthusiasm when he announced the convictions of Sullivan and Brissette with calls to go after even more public corruption cases in Massachusetts. Now, the 90-page decision from Judge Sorokin states that beyond the government losing the case, prosecutors were involved in misconduct. He wrote;

After a careful review of the entire record in this case, including the parties’ substantial post-trial briefs, the Court takes the unusual step of setting aside the jury’s guilty verdicts and directing the entry of verdicts of NOT GUILTY as to both Brissette and Sullivan on all charges. This action is required based on the government’s failure to prove that either man committed the charged offenses.”

So two innocent men were set to go to prison and this last minute decision, this correct decision, saved them. The entire decision is worth a read.

Judge Sorokin stated that government prosecutors presented evidence at trial showing that both Brissette and Sullivan were involved in discussions that would prove their guilt. The problem was that Assistant US Attorneys Kristina E. Barclay and Laura Kaplan never introduced such evidence but they told the jury they would. Barclay and Kaplan also introduced testimony of other violent confrontations associated with union demands for using their labor, something not even relevant to this case as neither defendant was accused of violence.

Judge Sorokin called out AUSA Kaplan writing, “Assistant United States Attorney (“AUSA”) Laura Kaplan delivered the closing on behalf of the government. Numerous statements she made constituted prosecutorial misconduct … With her improper comments at the close of this case, AUSA Kaplan threw the weight of the government behind legal theories ruled out by the Court and recast those theories as emotional arguments for fairness and good government, thereby diverting the jury from its task as to the pivotal issues and elements in this case.”

The other AUSA, Barclay has had her own brushes with accusations of misconduct. She was on the prosecution team in 2016 against three former land owners who sold 36 acres to Wynn Resorts for its $2.6 billion casino that now sits in Everett, MA (just outside Boston). The defendants accused the US attorney’s office of withholding exculpatory evidence related to two private investigators for Wynn who were allegedly allowed into a wiretap room at the state attorney general’s office and that Wynn knew of information about one of the land ownership members, something that was the crux of the indictment. While that judge, US District Judge Nathaniel Gorton, sided with the prosecution on the ruling that allowed the trial to proceed, all three defendants were eventually found not guilty after jurors deliberated for only a few hours.

Last year, AUSA Barclay lost a court case where Gary DeCicco, interestingly also an early partner in the land sold to Wynn Resorts in the case mentioned above, was found not-guilty in an extortion case. There, a key government informant with friendly ties to FBI agents over many years, lied repeatedly on the witness stand. DeCicco spent 15 months in prison awaiting trial after being denied bail. While DeCicco was held in prison on the extortion charge, Barclay indicted him on new charges involving mortgage fraud. That mortgage case is pending and DeCicco maintains his innocence.

Last November, Tracy Miner (Miner Orkand Siddall LLP), DeCicco’s current attorney, filed a motion stating that he was wrongly prosecuted in the extortion case and requested a monetary reward from the US government through the Hyde Amendment. Hyde was passed in 1997 by the US Congress as an effort to minimize (one would hope eliminate) abuse of powers by prosecutors by offering financial compensation to defendants who were wrongfully charged. While federal acquittals are rare, Hyde Amendment awards are rarer still.

Miner wrote in her memorandum in support of DeCicco’s motion to receive compensation for wrongful prosecution;

“The Government first brought unfounded charges against Mr. DeCicco, then engaged in repeated discovery violations and repeated a troubling series of false statements to the Court, all in a quest to convict Defendant Gary DeCicco of a federal offense he did not commit. The Government did so because Mr. DeCicco refused to cooperate in a separate high-profile investigation. After Mr. DeCicco refused, the Government came after him with the full force of the U.S. Attorney’s Office and the FBI, causing Mr. DeCicco to suffer 15 months of pre-trial detention, significant legal fees, loss of business income as well as the stress and anxiety that naturally accompanies any federal charge.”

The US Attorneys Office had heavy weight Assistant US Attorney Fred Wyshak Jr. respond by stating the the motion was filed too late and “… If there has been any unethical conduct in the case at bar, it has been the conduct of Defendant’s attorneys [Tracy Miner] in attempting to extort the government to dismiss the pending charges against Defendant.” The gloves are off and no decision has been made as to DeCicco’s Hyde Amendment.

Miner revealed as part of a docket entry in the current DeCicco case that she filed a complaint with the Office of Professional Responsibility against AUSA Barclay and two FBI agents involved in DeCicco’s extortion case stating that, “… a review of the record in this case, it is apparent that the misconduct of Government agents, who are sworn to uphold the law, ultimately unlawfully cost Mr. DeCicco fifteen months of his freedom, irreparable damage to his reputation, and millions of dollars before he was acquitted by the jury.” The primary mission of the Office of Professional Responsibility (part of the Department of Justice) is to ensure that Department attorneys perform their duties in accordance with the high professional standards expected of the nation’s principal law enforcement agency.

Media outlets need to pick up on stories like this to not only investigate injustices associated with wrongly prosecuted citizens, but also call out those committing those injustices in the name of the US government.

Does Mayor Pete’s Last Name Help Him Or Hurt Him?

Stocks This Week: The Equity Indices Will Likely...

How To Stick With Your Financial New Year’s...