Home Finance Federal Reserve Returns To 2008 With A Whimper
Finance 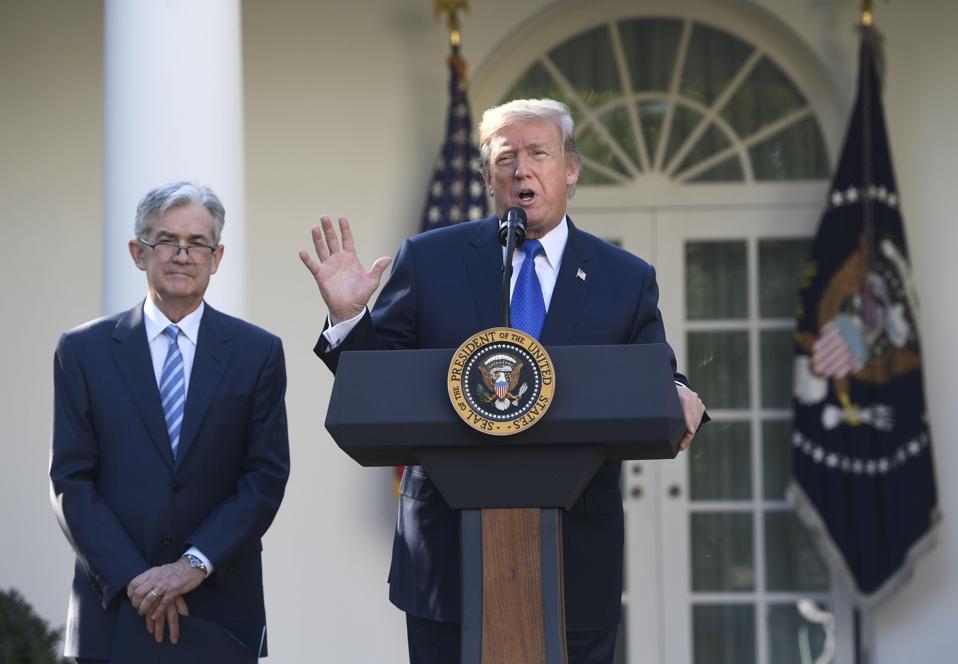 U.S. President Donald Trump announces his nominee for Chairman of the Federal Reserve, Jerome … [+] Powell, in the Rose Garden of the White House in Washington, D.C., on November 2, 2017.

The Federal Reserve unleashed a bull market in at least one thing with its dramatic weekend rate cut: Déjà vu.

As I pointed out in a March 12 piece, Fed Chairman Jerome Powell has fallen into Donald Trump’s trap and helped morph America into Japan. All monetary stimulus and zero structural reform zombified Japan’s once innovative and proactive economy. Trumponomics is following the same path to economic mediocrity.

But with his latest bow to a bullying leader, one wonders if Powell isn’t now reading from the People’s Bank of China playbook.

Trump’s White House has a knack for not learning Asia’s lessons. First, he cribbed from the post-Ferdinand-Marcos-era Philippines by morphing his administration into a for-personal-profit machine. His cronyism even extends to having his kids work in the West Wing.

More recently, as coronavirus risks surge, Trump borrowed pages from North Korea. He should have been studying South Korea’s aggressive and transparent assault on the pandemic. Instead, he’s downplayed risks, obfuscated and put doting sycophants on the spot — on live television — to applaud his non-successes in ways that might have Kim Jong Un blushing.

Now, the Fed is doing his bidding in ways that only China’s Xi Jinping might recognize.

Sure, the Powell Fed had already gone the Japan route, bowing to Trump’s demand for ever more monetary stimulus. In retrospect, Trump knew what he was doing in February 2018 when he, for the first time in history, hired a non-economist to run the Fed. Powell has indeed operated more on gut feelings and political whims than empirical evidence.

But Sunday’s move, the second emergency easing in less than two weeks, showed the real emergency is a pivotal U.S. institution officially becoming part of the state. Powell should have extracted a commitment from Trump’s team to compliment his liquidity with action on the fiscal side, including a giant infrastructure push. An all-hands-on-deck effort to bolster market confidence. Instead, he put a “Make America Great” hat over Fed headquarters without getting anything in return.

The Bank of Japan, for all its own obsequiousness to politicians, has, for better or worse, held its monetary fire in recent months even as the economy veered toward recession.

There are widespread expectations the BOJ will have to act on Thursday (or much sooner). If not, the yen is likely to skyrocket against the dollar, imperiling Japan’s biggest exporters. And clearly, with rates below the Fed, the BOJ needs to be more creative than forceful. Yet Japanese Prime Minister Shinzo Abe doesn’t browbeat BOJ Governor Haruhiko Kuroda via Twitter the way Trump does Powell. Abe’s Liberal Democratic Party, for all its flaws, hasn’t threatened to fire Kuroda.

But the “Chinafication” of the Fed, the ways in which one of America’s most cherished institution has fully acquiesced to Trump, will be with the global financial system for years to come. Supreme Court watchers in Washington have been all over the ways in which Trump is bending the justices to his will. The Fed is well ahead of the Court, though, in terms of becoming a tool of our Trumpian times.

This should worry Asia in a variety of ways. One, the dollar, the linchpin of the global economy, is in the hands of an erratic amateur. And a Fed leader who’s more afraid of Trump’s tweets than lost credibility in foreign exchange markets. Not a great combination.

Two, U.S. Treasury securities. The trillions of dollars of Washington IOUs on which Asian governments are sitting are in hands of a former reality-TV star with a long history of bankruptcies. Trump, remember, also has hinted at a de facto default. On the campaign trail in May 2016, Trump said that if public debt becomes a problem, “I would borrow knowing that if the economy crashed, you could make a deal.”

Three, Trump is doing zero on the reform side to protect U.S. growth. Goldman Sachs, for example, thinks gross domestic product will crater 5% in the second quarter. Trump already unleashed a $1.5 trillion tax cut, one that failed to propel U.S. growth to the highest levels achieved under predecessor Barack Obama. Trump needs to do a massive fiscal stimulus akin to, or preferably larger than, Obama’s in 2009.

Instead, he’s eyeing half measures through an ideological lens, including more corporate tax cuts. In the meantime, he’s expecting the Fed to go the China route and underwrite his profligacy. Is it really a reach to think Trump won’t bully Powell into directly monetizing U.S. debt? Or prodding Treasury Secretary Steven Mnuchin to effectively devalue the dollar?

The Fed, let’s face it, is now a tool of the state. In times past, the Fed’s role, in the words of one-time chairman William McChesney Martin, was to “take away the punch bowl just as the party gets going.” In the Trump era, the Powell Fed is refilling it at the behest of a ruler with zero regard for institutional checks and balances or the basic tenets of capitalism. Call it Trumponomics, with Chinese characteristics.

Planets And A ‘Diamond In The Sky’ Usher Early Equinox: What You Can See In The Night Sky This Week

Bankruptcy Or Bailout? McConnell And Pritzker Give Their...

The Liquidity Crunch: Bitcoin And Beyond