Breaking
Boston Globe Starting “Fresh Start” Initiative As Part...
Can Money Protect You From Covid-19? It May...
The Most Important Voice In Artificial Intelligence: Frontline...
Amazon’s Small Business Empowerment Team Is Helping Entrepreneurs...
10 Ways For Entrepreneurs To Power Through Tough...
Will The Cloud Take Down The Mainframe?
How Itamar Medical Stock Could Triple
How To Cash In On Biden’s Stimulus With...
The Refactoring X-Factor Behind Software Modernization
3 Habits Of Millionaires
Will The Stock Market Sell Off As Biden...
Microsoft Reverses Xbox Live Gold Price Increase Following...
Weekend Favs January 23
FDA Approves First Monthly Injections To Treat HIV
Low Volatility Investing Works In China Too
How 2020 Introduced Big Technology Startup Opportunities
Home Business FedEx Asks Washington Redskins To Change Name
Business

FedEx on Thursday formally asked the Washington Redskins to change the football team’s name in the wake of mounting financial and political pressure to reckon with racist names and symbols following widespread protests against racism and police brutality. 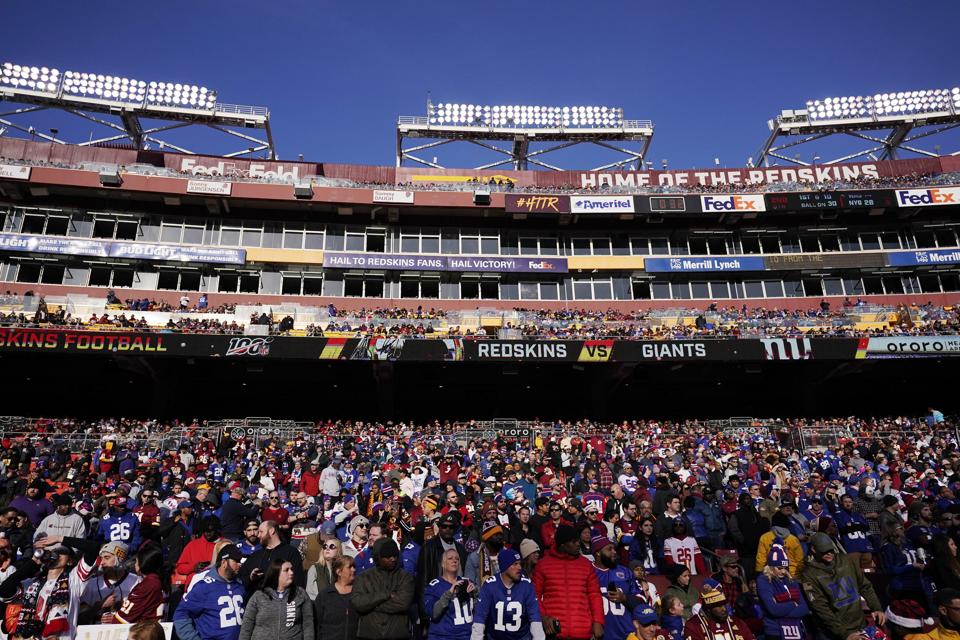 Fans sit in the stands during the first half of a game between the New York Giants and Washington … [+] Redskins at FedExField on December 22, 2019 in Landover, Maryland.

FedEx is a major backer of the Washington D.C. team, owns the naming rights to the stadium they play in and billionaire FedEx CEO Fred Smith also owns a minority stake in the team.

The company said in a statement it “communicated to the team in Washington our request that they change the team name,” but did not elaborate further.

The move comes after 87 investors representing $620 billion in assets wrote a letter last week asking FedEx, Nike, PepsiCo to cut ties with the team if it didn’t change the name because it is disparaging toward Native Americans, AdWeek reported.

Eleanor Holmes Norton, Washington D.C.’s nonvoting delegate in the House of Representatives, also said Wednesday the city would not allow the team to move their home stadium from Landover, Maryland to a site in Washington D.C. if it doesn’t change the name.

Native American leaders have been pressuring Snyder to change the name for years, but the owner has stood firm even in the face of a pressure campaign in 2014 from tribal leaders and lawmakers.

Protests across the country following the death of George Floyd have forced business leaders and politicians to rethink building names, statues and other imagery associated with racist historical figures. The Redskins already announced last month it would remove founder George Preston Marshall’s name from all team material because he was notorious for opposing integration in the NFL. Demonstrators have also toppled and called for the removal of statues of Christopher Columbus, citing the deadly impact his arrival had on indigenous populations and several cities have already taken down such monuments.

Page Speed Optimization: Metrics, Tools, and How to Improve — Best of Whiteboard Friday