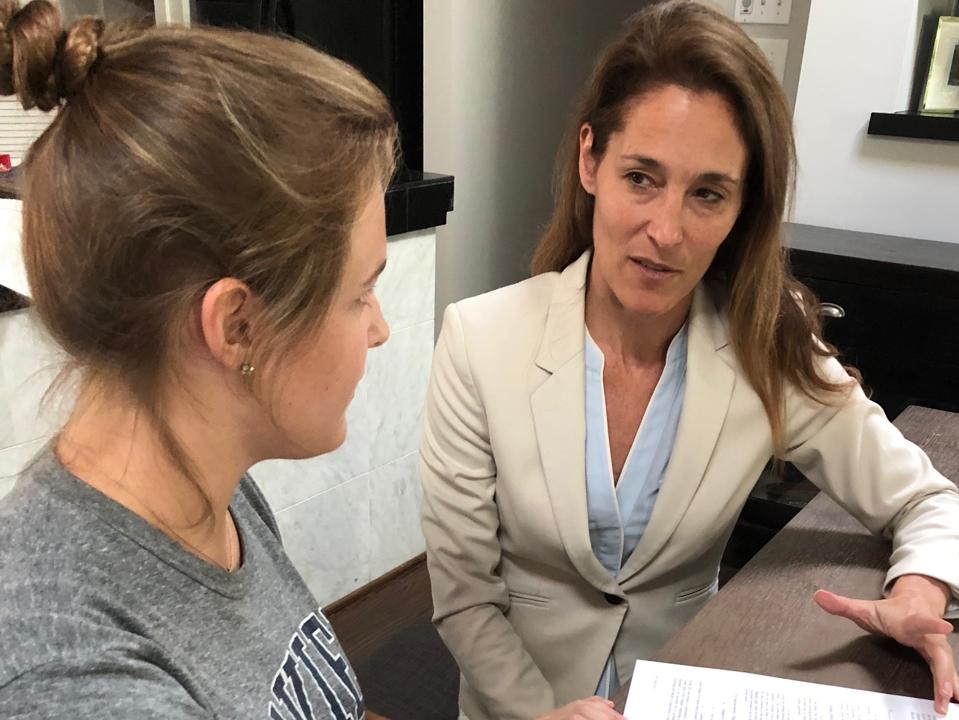 Jeannie Ringo, founder and CEO at Funding U

When I interviewed Jeannie Ringo, founder and CEO at Funding U, I remember what Larry Keeley, president and co-founder at Dublin Group, and managing director at Deloitte Consulting told me — men and women innovate differently. I interviewed him several years ago when he published Ten Types of Innovation: The Discipline of Building Breakthroughs. Women approach problem-solving holistically and systematically, he commented. They are not looking for a simple answer and, as a result, create comprehensive solutions.

More than half of college students — 51% — dropped out of college because of financial issues, according to a LendEDU survey. Low- to moderate-income parents may lack a good credit score, making a bank loan impossible. On the other hand, as a result of no or thin credit history, students may have no credit score or a low one. Because of the financial situation of their parents, these students also may not find a co-signer. One of Ringo’s roommates in Princeton — the friend who was most focused and with the best academic record — faced this situation in 1991. Ultimately, her friend was able to raise funds through additional grants and low-cost loans from alumni. “It was a different landscape for college financing,” she said.

Ringo’s career took some twists and turns — book publishing, education, and nonprofits — but she never forgot what a tough time her friend went through. Helping low- to moderate-income students finance their college education was a problem that she wanted to help solve. Despite doing everything right, these students do not get the same opportunities as others. “Often, they lacked $4,000 or $5,000 [to finish college], which might as well be $4 million or $5 million,” said Ringo.

Enter fintech, which employs artificial intelligence and big data to make lending less discriminatory. Algorithmic lending is transforming everything, from personal loans to small-business borrowing. Could this technology be used to identify people who, despite their credit scores, were at low risk of defaulting on the money they borrow because of their educational achievements? In 2015, Ringo launched Funding U, using a proprietary algorithm based on educational performance to provide student loans.

At first, Funding U focused on helping high- achieving, low- to moderate-income students attending prestigious schools pay for their degrees. Young people have not established enough credit history to have a good credit score. “What if there was a predictive credit model that was based on academic performance, the major you choose, and how you take on debt?” said Ringo. Because low- to moderate-income students do not have someone to be a co-signer, the model would not require one.

In 2016, Funding U opened its doors to student borrowers. With no advertising, within 20 days, the company received 2,000 applications from 45 states. Ringo realized the need was much more significant than she’d realized. Many applicants were students attending public schools. The problem existed for all students who borrowed, together, $110 billion to fund their college education in 2013. In fact, “the problem is not just an issue for college loans. There is an opportunity for a company whose core competency is based on education lending,” said Ringo. “We could sell our data about student borrower patterns to improve other lending products.” Lenders could use the data to predict creditworthiness for anything from a loan to buy a home or to start a business.

Financing Funding U has been a big challenge for Ringo, too. This is a big idea requiring innovative funders. Interestingly, angels and venture capitalists, who are supposed to fund innovation, are derisking their investments by investing in serial entrepreneurs and established business models. She was neither. “There is a tension between a stated commitment to massively disrupt key industries and receiving a good return on their investments,” said Ringo. As a result, instead of swinging big for a home run and sometimes striking out, investors are playing it safe and going for singles and doubles. Many equity investors stand on the sideline until the company is at a later stage when it has proven its business model.

While attitudes among angels and venture capitalist making impact investments are changing, investors who invest in “changing the world” kind of ideas are few and far between. With persistence, Funding U has been able to attract social-impact debt investors, including the Caerus Foundation, the Fuqua Family, Goldman Sachs, and MacKenzie Bezos. They make a 7.5% interest rate annually on their investment. Fintech equity investors include Bezos Expeditions, Deciens Capital, and Valor Ventures. Whether debt or equity, Funding U investors want to do good, but they will not sacrifice a good return on their investment.

Without increasing marketing spend, between 2018 and 2019, applications have increased two times and conversion rates fourfold. Yet, some are still uncomfortable with the 11% interest rate Funding U charges. The interest rate takes into consideration the higher risk it takes with its lending model.

Ringo realized that there is a need for borrowers to understand in which situations its loans are right. Credible intermediaries need to provide this information, such as schools and financial aid officers. Funding U has begun to educate them so they can explain when their loans should be used.

In addition, “seals of approval” are being sought. It is pursuing federal dollars as a certified Community Development Financial Institute. CDFIs are private financial institutions that provide fair, transparent financing, and financial education to people and communities underserved by mainstream financial institutions. Funding U may also become a B Corp. B Corps are for-profits authorized by 35 U.S. states and the District of Columbia that meet specific standards of doing social good, including making a positive impact on society, workers, the community, and the environment.

How will you provide a comprehensive solution, so your company succeeds?

Yotto On His Remix Of ‘Antigone’ And New Tour Dates

‘Parasite’ Has The Biggest Post-Oscars Boost In U.K. Box Office