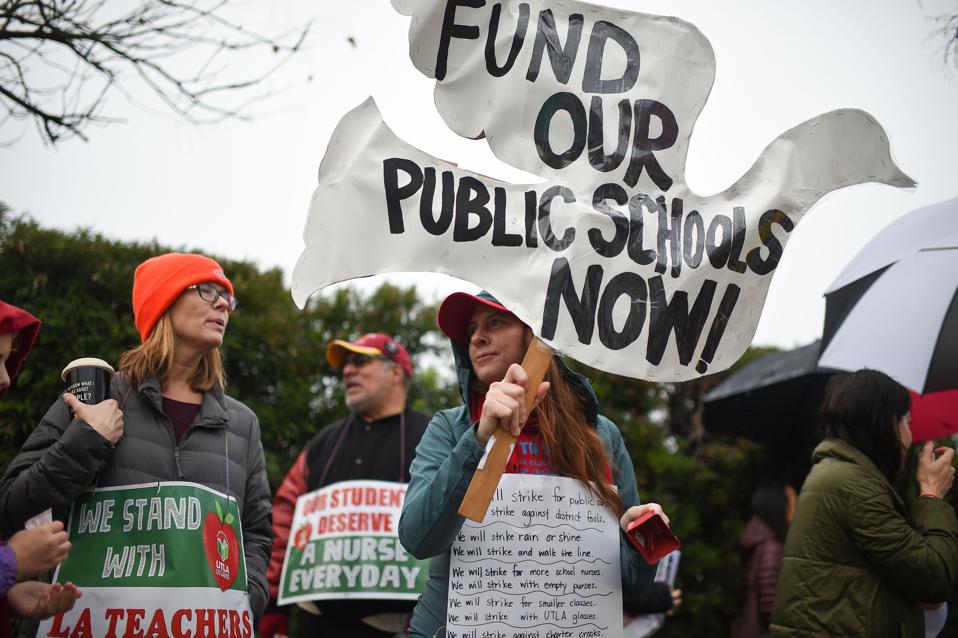 Striking teachers are joined by parents and students on the picket line outside Dahlia Heights … [+] Elementary School in the Eagle Rock section of Los Angeles, California on the third day of the teachers strike, on January 16, 2019. – Teachers of the Los Angeles Unified School District (LAUSD), the second largest public school district in the United States, are striking for smaller class size, better school funding and higher teacher pay. (Photo by Robyn Beck / AFP) (Photo credit should read ROBYN BECK/AFP via Getty Images)

One of the nation’s most critical industries for economic recovery and long-term prosperity is losing jobs, and needs immediate help from Washington.  No, it isn’t hair salons, or cruise ships, or the NFL.  It is K-12 education.  As state and local budgets plummet due to the pandemic recession, our public school systems are increasingly at risk.

That is very bad news for K-12 education, for the economic recovery, and for our long-term propserity. Spending cuts will fall heavily on K-12, because it is such a big share of state and local spending and employment.  That means fewer dollars in the economy, less spending and demand, and a slower return to economic growth.

States and cities, facing a sea of red ink, are not debating whether to cut education spending, but only how deep the cuts will be; as NPR reports, Georgia is forecasting a 14% cut in education spending, while Michigan may cut up to 25%.  And other states face similar dire prospects.

We don’t often think of education as an industry.  But it is critical to our economy.

In 2016-17, America spent $736 billion on K-12 education, with 57% going directly to salaries.  But schools also contracted for $80.9 billion of services, employing bus drivers, cooks, and janitors, but also nurses and learning disability specialists. And public schools bought $51.5 billion in supplies, ranging from textbooks to sports equipment to heating oil.

That’s a lot of money, and a lot of jobs.  And the vast majority of funds come from state and local sources, not the federal government.  Only eight percent of that $736 billion came from Washington, with the rest divided between states (47 percent, or $346 billion) and localities (45 percent, or $330 billion.) (The specific state-local mix varies a lot between states, ranging from Vermont and Hawaii where around 90 percent comes from the state, down to New Hampshire [32%] and Nevada [36%].)

States and cities spend more on K-12 than anything else. In 2019 K-12 was second only to Medicaid in total state outlays.   But since the federal government pays a significant portion of Medicaid, K-12 spending actually represents the largest share—almost 25 percent—of how states spend their own revenues.

And those state revenues are collapsing due to the pandemic recession.  In a normal year, states and their cities see tax revenues in April, and then plan their budgets for the fiscal year that usually starts on July 1 (46 states use that date).  But due to the pandemic, tax filings this year were delayed until mid-July, so governments are relying on revenue estimates for planning.

Sadly, those estimates look worse every day.  No state—east or west, rural or urban, red or blue—is immune.  Revenues already are falling for the last few months of FY2020, as the economic shutdown kicked in during March.  And projections for FY2021 show widening declines, extending well into 2022.  The Center on Budget and Policy Priorities estimates states will lose 15 percent of revenues in the current fiscal year, and “more than 25 percent in fiscal year 2021,” adding up to “likely shortfalls of $765 billion over three years.”

Education cuts will especially hurt women. Teaching remains a highly feminized and underpaid occupation (over 75% of K-12 teachers are women), due to ongoing wage discrimination against women. But working families—especially mothers—also rely on K-12 not only to educate their children, but to allow them to work outside the home. So declines in K-12 hurt women disproportionately, both as employees and as workers in the larger economy.

The long-term consequences of K-12 cuts are just as sobering.  Education is central to our economic prosperity, and cutting K-12 spending will mean bigger classrooms, fewer resources for teachers, reductions in arts and libraries, and less help for children with learning disabilities or other needs.

We’ve been through this before.  After the 2008 Great Recession, America lost around 120,000 K-12 teaching jobs.   And we never recovered them.  Education expert Michael Griffith has documented that “it has been almost a decade since the end of the recession, and we still have fewer public school teachers today than we did in 2008.”  If we don’t provide more federal funding to schools in the current crisis, we will lose even more teachers, resulting in declining educational quality.

Quality K-12 education is especially important for poor children, who often are restricted to school systems with lower tax bases than wealthy suburbs.  Because public school systems rely heavily on property taxes in many places, our existing funding methods produce unequal and unfair results.  Advocates have documented how unfair our K-12 funding systems are, and how they produce unequal results that perpetuate inequality and poverty, especially in terms of race.

So Washington needs to act.  K-12 education needs a large, direct injection of federal money. If state and local governments cut their way out of this budget problem by slashing K-12 education, our economy will be further damaged, and the recovery will be slower.  And our long-term economic competitiveness will suffer while inequality and discrimination will grow.

The “Yeah, Sure” Theory Of Business Success: Entrepreneurship After COVID.

How To Make Your 2020 Financial Resolutions Stick

Earnings Preview: What To Expect From Hilton On...