Breaking
In Need Of A Competitive Edge? Look To...
Think Small: Timely Picks To Capture The Reawakening...
Patient Gets Covid-19 Swab Lodged In Her Lung...
Nine Signs You’re Not Being Effective During Your...
Chromebooks Can Now Run Windows 10 – Find...
Will Biden’s Tax/Benefit Plans Help/Hurt You And The...
This Fashion Brand Turned A Stripe Into A...
Shots In The Dark: Why Access To A...
What Building Wealth Really Takes In Business
Building A Circular Economy In New York City...
How To Cast Your Vote Against Election Scams
New Science On Stress: Feeling Your Feelings Works...
Why Now Is The Right Time To Acquire...
7 Obstacles That Prevent People From Starting Businesses...
Booking Holdings Falls; Likely To Remain A Risky...
Apple iPhone Crushes Samsung Galaxy In Important New...
Home Business Five Classic War Games (And Their Modern Successors) To Check Out On Cyber Monday
Business 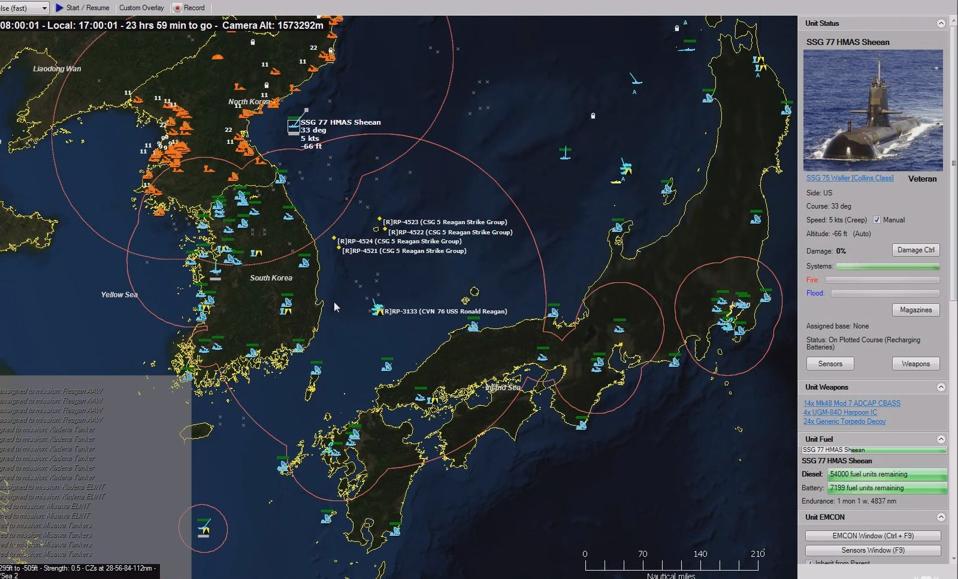 Nearly 200 years ago in 1824 a Prussian general staff officer invented Kriegspiel, arguably the first war game designed to simulate real-world combat. War gaming with miniatures or board games eventually grew into a broader hobby in 1950s. Then in the 1980s, computers allowed even more complex war games with greater degrees of graphical immersion.

Of course, the best war games are fun foremost, featuring deep and varied game play that can keep one engrossed for dozens or even hundreds of hours.

But war games are also a great way to learn about forgotten conflicts and discover hands-on the strategic and/or tactical principles that governed them. Some games can even serve as great sandboxes to experiment with technologies and strategies never used in combat before. For that reason, real world militaries and defense think tanks are making increasing use of commercial war games.

Of course, no war game is perfectly realistic. Most accord players unrealistic degrees of situational awareness and instantaneous command-and-control. And while simulating bullet and shell trajectories is tricky enough, that’s nothing compared to the intangible human factors underlying armed conflict.

So with Cyber Monday coming up, here’s a guide to five classic war games, and insights on to some of their modern incarnations, or games inspired by them might make a rewarding purchase.

Playing CC is all about maneuvering fireteams and tanks around rural hedgerows and war-torn city blocks, desperately rushing for cover while dreading inevitable ambushes; it’s about teaming fire support unit that can suppress enemies with assault squads ready to storm a position.  Soldiers are individually psychologically modeled, and may refuse to follow suicidal orders. Beautiful, hand-painted and historically accurate maps are another draw.

Artillery and air strikes are arguably a little too precise and effective, but convincingly convey why indirect fire accounted for the majority of infantry casualties in World War II. Close Combat games also feature an operational layer of varying quality.

Recommendations: Close Combat has gone through several generations without the core game play changing too much. The most recent iterations are Gateway to Caen and The Bloody First, which boasts a new 3D-engine. I played 2D Gateway and loved it, even though I wouldn’t have minded a bit more modernization. There’s also the modern-warfare Close Combat Tactics.

Arguably, the greatest in the series is a A Bridge to Far, which recreates the desperate last stand of Allied paratroopers battling German armor in the fall of 1944. Its tank-heavy successor The Eastern Front plays less to the game’s strengths, but is still a blast.

Since 2000, Combat Mission has stood head and shoulder above its peers for its detailed and visually striking treatment of company- to battalion-level ground combat operations. The later games are played in real time, but liberal use of the pause command is necessary to issue orders to dozens of individually modeled infantry squads, tanks and forward observers. The game often compels you to lower your camera to ground level to figure out just what your troops can see.

Recommendations: Developer Battlefront presciently developed games focused on hypothetical wars in Syria (Shock Force) and Ukraine (Black Sea) prior to both countries tragically becoming consumed in conflict.  Shock Force has been used as a training aid by the Army’s Command and General Staff school. Black Sea should be especially interesting in war gaming scenarios for a NATO-Russia conflict.

There’s also a whole lineup of World War II-focused games in the modern Combat Mission family (Normandy, Red Thunder (Soviet Bagration offensive), Final Blitzkrieg (Battle of the Bulge), and Fortress Italy (Allied invasion of Italy in 1943), and even a spin-off depicting the Soviet war in Afghanistan.

However, my personnel favorites remain the original Combat Mission trilogy, : Beyond Overlord, Barbarossa to Berlin and Afrika Korps. These require a bit less micro-managing, and each game is broader in scope.

Steel Panthers is a classic strategy game that in various incarnations has simulated mechanized warfare from pre-World War II battles with biplane bombers and cavalry to the modern era skirmishes complete with attack helicopters and wire-guided anti-tank missiles. It’s intuitive and fun, yet its combat modelling generates plausible results based on stats tracked in databases counting literally thousands of units and weapons.

Despite its simple turn-based structure, Steel Panthers games remain a great way to learn fundamental tactical lessons first hand, such as why it’s a bad idea to recklessly charge even heavily armored tanks down city streets without first sending in scouts. That maybe why it’s been used as a training tool by the Marine Corps.

I’ve written in more detail about Steel Panthers in an earlier article you can read here.

Recommendations: Fortunately, Shrapnel Games offers both World War II and modern warfare variants of Steel Panthers for free. There’s a separate, somewhat more feature-tweaked World at War version of the game that you can acquire for free, or in a paid General’s Edition including four additional mega-campaigns.

The Operational Art of War (TOAOW) is a turn-based game all about controlling realistic military formations whose capabilities are computed based on their experience, supply level and their inventory of weapon systems—as detailed in real-world organizational documents. There’s a lot of systems running under the game’s hood, but the actual controls are not overly complicated.

The hundreds of stand-alone scenarios in TOAOW are simply stunning in variety and scope. In one, you might direct a few battalion of World War I tanks, cavalry and artillery battling Kaiser Wilhelm’s finest for control of a French county. In the next, you’re commanding divisions and brigades fighting the Korean War of reunification circa 2013, and weighing whether to deploy a nuclear preemptive strike. You’ll spend hours upon hours directing regiments in wars you’e never heard of before, along the way mastering the meaning of NATO tactical symbols.

The downside to the Operational Art series is that the game’s engine obscures tactical-level finesse, and its attrition-oriented mechanics make it better at simulating large-scale warfare in the 19th– and 20th-century than the technical intricacies of modern engagements. But for grasping the sheer scope of larger-scale conflicts, it’s second to none.

Recommendations: As the series has steadily increased in scope while retaining older scenarios, there’s no reason not to go for the latest Operational Art of War IV, which features improved modelling of logistics, time management and naval warfare.

A successor to the Harpoon series of war games published between 1989-2007, Command is today’s top simulator focusing on the crunchy subtleties of hi-tech 21st century warfare in the air and at sea—and even a bit on land. Not only does the game’s vast unit library track stats like speed, fuel capacity and electromagnetic signature of ships and aircraft—it tracking those same traits for each type of missile and gun carried on board them.

Action unfolds in real time on a global scale—and because some engagements could stretch over hours in real life, there’s a fast-forward button to help move things along.

Command  undeniably has a significant learning curve. In fact, it’s realistic enough there’s a professional edition sold for defense education and analysis use, and there are lots of articles where analysts and journalist use it to ‘test’ combat scenarios and new technologies—for example, pitting the under-gunned littoral combat ships against Chinese missile boats, or F-35 stealth fighters versus Russian Su-35 multi-role jets.

Good war games offer both entertainment and insight into warfare—but few simulate the impact of war on civilian populations.

Polish 11 bit Studio’s This War of Mine is a rare attempt to look at the struggle civilians in urban combat zones face coping with scarce resources and psychological trauma. It was reportedly was informed by interviews of survivors of the siege of Sarajevo and the 2004 Battle of Fallujah.