Five Reasons The U.S. Army Deserves To Be First In Line For More Modernization Funding

The Trump defense increases are over. After a big jump between 2017 and 2018, military budgets have plateaued and will not keep up with inflation in future years.

As a result, the Navy is unlikely to achieve the 355-ship fleet it says it needs for the foreseeable future. The Air Force will never get anywhere near the 386 squadrons of aircraft that match its projected operational requirements. And efforts by the Marine Corps to transform the way it fights face an uphill battle in what the Commandant describes as a “flat to declining” budget environment.

Army leaders saw what was coming and gave up on increasing the size of their force over a year ago. Instead, they opted to spend what discretionary resources they had on modernizing their weapons and networks. Many of the Army’s current weapons first entered the force in the 1980s; the service is long overdue for a technology refresh.

The other services plan to modernize too, and the Navy in particular is arguing it needs a bigger share of whatever military funding is available. However, this commentary is about why the Army deserves to be first in line if Congress or the Trump Administration decides to make more funding available for modernization. 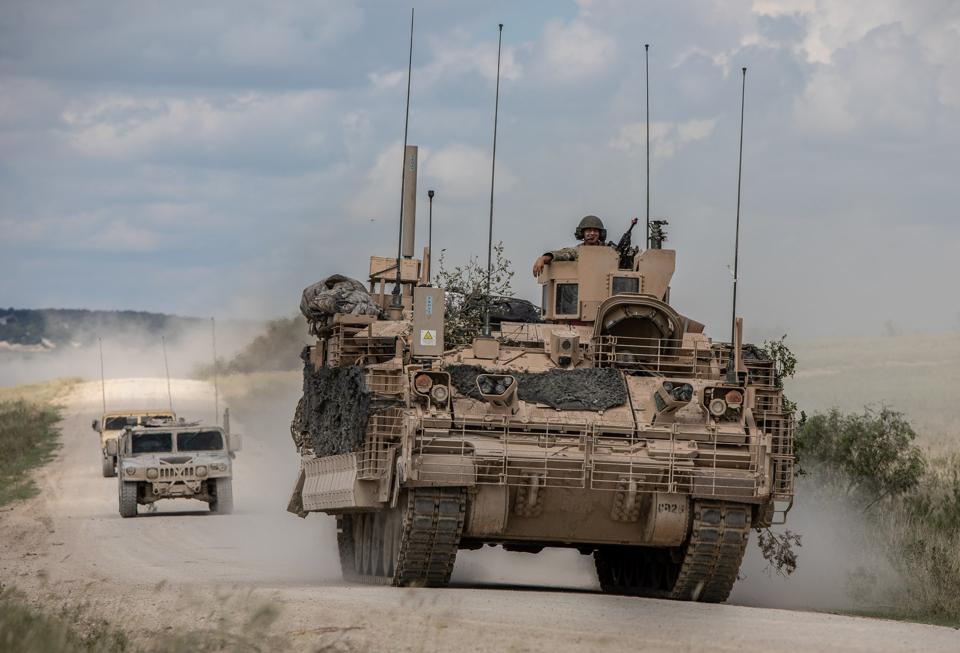 The highly-regarded Armored Multi-Purpose Vehicle, a replacement of Vietnam-era troop carriers, is … [+] one of the programs that has seen spending cuts to reconcile the Army’s modernization budget.

You will never hear some of these arguments articulated by Army leaders. Collectively, though, they present a compelling case for why Army modernization deserves higher priority than the aspirations of other services.

Soldiers are more likely to be killed or wounded in wars. When war comes, the Army always suffers the greatest number of casualties. In Operation Enduring Freedom, the invasion and occupation of Afghanistan from 2001 to 2014, 71% of all U.S. deaths and 71% of non-mortal wounds were to soldiers. In Operation Iraqi Freedom from 2003 to 2010, 73% of all U.S. deaths were soldiers, as were 70% of wounded. The numbers were similar in the Korean War (81% of deaths), the Vietnam War (65% of deaths) and the Persian Gulf War (58% of deaths). If the Pentagon wants to minimize the number of U.S. casualties in future combat, it needs to focus first of all on giving soldiers better protection, firepower, mobility and situational awareness.

The Army only gets one day of federal spending per year for R&D. Modernization means developing newer and better warfighting systems. But less than 2% of the defense department’s proposed budget for 2021 will go to Army R&D. The $12.8 billion the Army has requested for all facets of technology development is less than the $13.2 billion the federal government will spend on a typical day. In fact, it is only about twice of what Americans are expected to spend celebrating St. Patrick’s Day in three weeks ($5-6 billion). Even if you add procurement of existing weapons to R&D, the Army’s entire “investment” account for 2021 is barely 5% of proposed military spending. The other military departments are receiving a lot more money for warfighters who often will be at less risk.

When military budgets stop rising, modernization is the first casualty. Like the other military services, the Army has made readiness for combat its top priority. But it also has a huge personnel bill to pay each year, and when budgets tighten the tendency always is to cut modernization outlays first. The reason is obvious: if you cut personnel or training or maintenance, the force will decay quickly; if you cut modernization, in many cases the weapons under development weren’t destined to reach the force for a decade or longer. In other words, nobody will miss weapons they’ve never had. But if you stick with those priorities for many years, you end up with a well-trained force that is operating antique weapons. Meanwhile, countries like China begin to overtake U.S. warfighting technology. The Army needs to modernize its weapons faster to keep up with what near-peer adversaries are doing, otherwise it will end up armed for the last war rather than the next.

Army leaders are already being forced to cut things soldiers will need. The Army’s 2021 budget request cuts or kills 80 technology programs in order to protect the service’s highest-priority modernization initiatives. Many of the trimmed programs are needed in the near term to protect soldiers or deter enemies. For instance, the service has issued an “unfunded priorities” list that acknowledges it needs dozens more Stryker troop carriers with improved protection of troops than it can afford. It also has elected to forego an upgrade of its only heavy-lift helicopter that was conceived to recover lost carrying capacity and range. And it continues to stretch out production of its next-generation jeep, the Joint Light Tactical Vehicle, even though that vehicle offers far more protection for soldiers than existing Humvees across the spectrum of conflict. It appears the Army lacks sufficient modernization funding to protect America’s most endangered warfighters.

The Army doesn’t require much money to fix its shortfalls. The other military services would need large infusions of funding to achieve their stated modernization goals. Warships and bombers are expensive items. The Army’s budget challenges are more manageable. Those 80 programs it cut or killed only yielded $2.4 billion in savings in 2021. For an amount equivalent to 1% of the defense budget, the Army could resolve all of its most pressing modernization challenges. It could purchase the additional Stryker troop carriers, it could keep the Joint Light Tactical Vehicle on track, and it could assure that its heavy-lift helicopter remains relevant through a service life stretching to 2060.

The Navy is not going to have a 355-ship fleet within the planning horizon of anyone making policy today. Nor is the Air Force likely to ever again have an air fleet as big as that with which it ended the Cold War. But for a dozen hours worth of federal spending, Washington can have the best-equipped Army in the world. And it can also assure that soldiers it sends into harm’s way in places like Eastern Europe and Korea are better protected than any troops in history. We just need to get our priorities straight.

Some contributors to my think tank would likely lose or gain from the priorities proposed here.

The Fourth Revolution: The Age Of Digital Enlightenment

3 Practices To Become Indistractable At Work

How To Foster An Entrepreneurial Spirit

This Overlooked Fund Will Pay 7.7% Dividends In...