Five Strange Things You Need To Know About Uranus 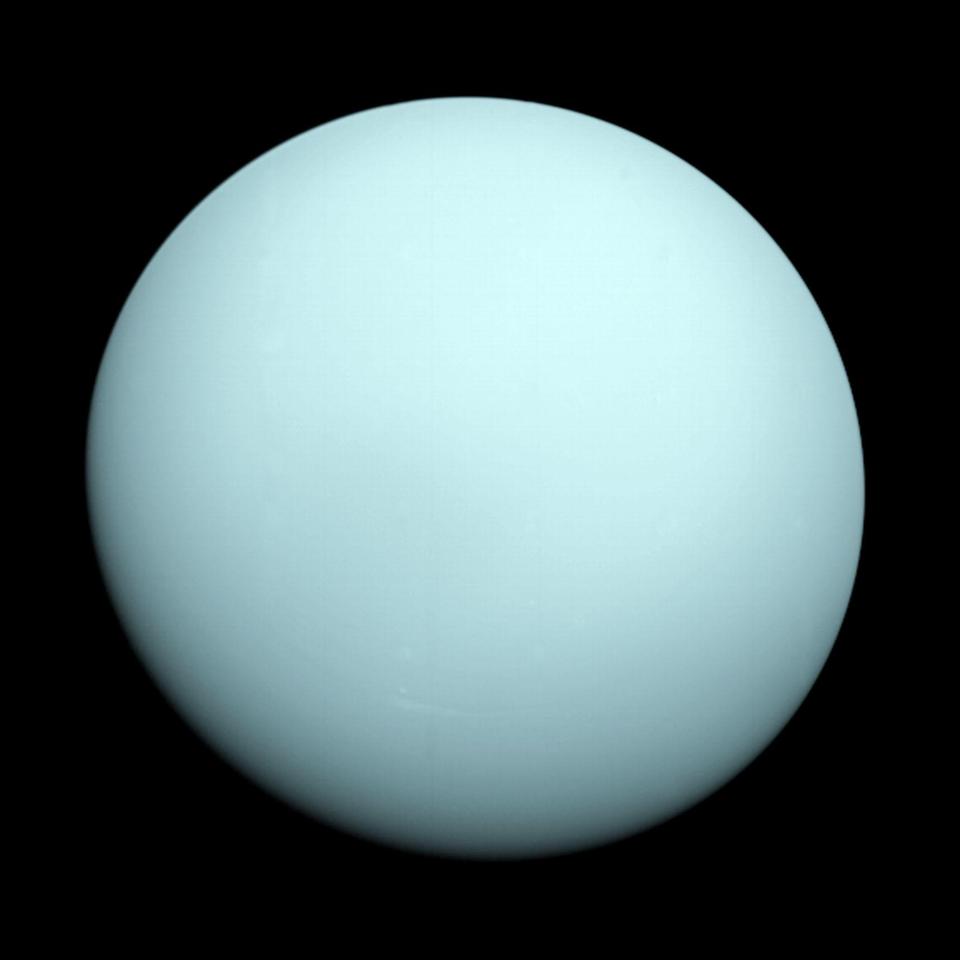 We’re all doing our best to try and get through this nasty pandemic, but time are decidedly grim. A good distraction, for me at least, is to chuck both science and humour into a metaphysical blender and see what comes out. And it may seem like a cheap shot, but when you find out that Voyager 2 once flew through an electrified bubble of gas launched by Uranus, I ask: how could you not write about it?

The study that article is based on is a genuinely fascinating bit of research, one that underscores several things — how little we know about the ice giants, Uranus and Neptune, how much data we obtained from humanity’s only flyby of these enthralling swirly-whirly worlds, and how much more we have to learn about the ways planets shed their atmospheres. But such research also invariably prompts researchers to comment on the near-perpetual gassiness of Uranus, something that prompts giggles even in people with the hardest of hearts.

So, with lofty goals of scientific education and a modicum of mirth in mind, I thought I’d distract you all for a moment with some fantastic shots of Uranus, accompanied by five things you probably didn’t know about the lexicological laughingstock of the solar system. 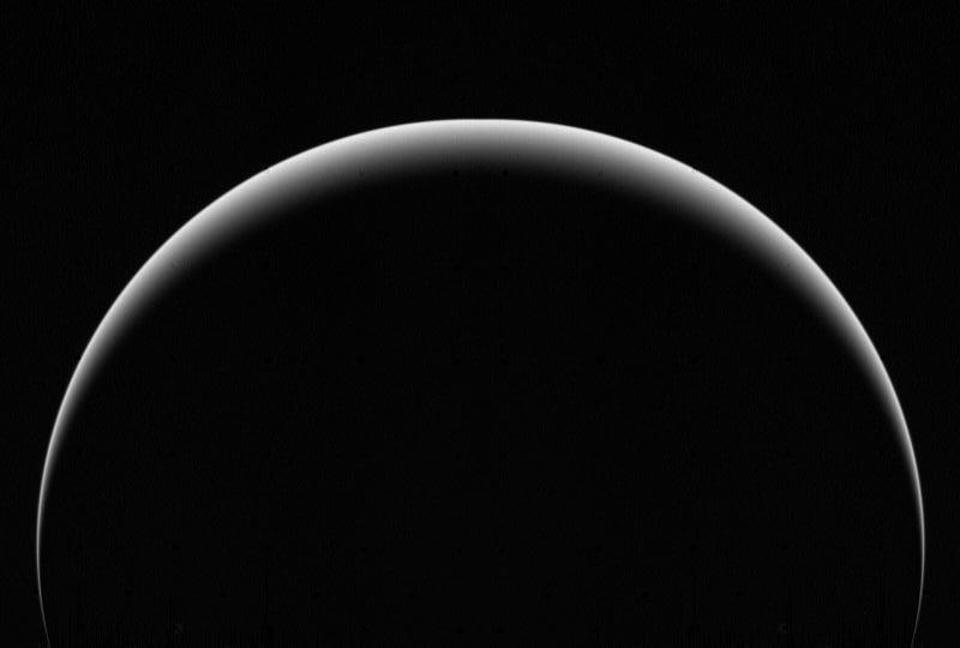 Voyager 2 took this breathtaking shot of Uranus back in 1986.

Uranus was discovered by William Herschel. A German-born astronomer, he decided that he didn’t fancy his chances as an oboist in a marching band and moved to England in 1755 to teach music. He ended up getting distracted by astronomy, built his own telescopes and ultimately discovered Uranus in 1781, which he initially suspected to be a comet or a star. Two years of debate later and, with the help of additional observations by fellow German astronomer Johann Elert Bode, the celestial object was officially declared a planet.

But what to name it? Herschel fancied ‘Georgium Sidus’ (the latter word meaning ‘star’), in honour of British monarch King George III – you know, of Hamilton fame, that one. In other words, the world following on from Saturn was about to be named George. Funnily enough, the king took a shine to Herschel: he appointed him as his private astronomer in 1782.

(Worth emphasising is the fact that Herschel considered astronomy a mere hobby of his until his discovery of the solar system’s seventh planet. Only after that point did he decide to abandon his music teaching career and focus entirely on gazing into the heavens. When you start your scientific career by discovering a planet, where do you go from there? Turns out that the ceiling was higher still: together with Caroline, his sister, the two of them hashed out the mathematical approach to astronomy that scientists still build their work off today.)

Sadly, other scientists weren’t happy to refer to a bright spot in the shadowy night as George. Bode suggested calling it Uranus, the Greek sky deity, and the rest, as they say, is history — one peppered with science journalists and editors trying to one-up each others’ double entendres.

2 – Uranus Has A Really Weird Spin

Uranus’ spin and the movement of its global magnetic field are misaligned, causing the magnetic … [+] field to wobble about all over the place as the planet rotates.

Planets spin on their axis in a variety of ways. Some, like Mercury and Jupiter, have a spin that ensures their north poles point pretty much at right angles to the plane of their orbital pathway around the Sun. Others, like Earth and Saturn, are titled on their axis a tad; sometimes their north pole is aiming a little more toward the Sun, and at other times it is angled away from the Sun.

Then we have Uranus, the seeming inebriate or sloth of the solar system: it has completely tipped over on its side. Whereas Jupiter, say, has a mild tilt of around three degrees, and Earth has a more pronounced list of 23.5 degrees, our gassy friend leans over at a 98-degree angle, which means that its equator is where Jupiter’s north pole should be.

Uranus takes 84 Earth-years to make one orbit of the Sun. That means its north and south poles take turns directly staring down the furnace at the heart of our solar system for 21 Earth-years a-piece per Uranian year.

It isn’t clear why Uranus, or really why any planet, is tipped over to any significant degree at all. The common refrain among astronomers is that a huge impact knocked these worlds over, but it would have taken one hell of a momentous smackdown to have manufactured the spit roast motion of Uranus.

A recent study reckons Uranus once had a sizeable system of rings around it, a little like Saturn does today. The orbital dance between these rings and a more youthful Uranus proved unstable, causing the ice giant to lurch about and tip over on its side. This wasn’t quite enough to get the 98-degree tilt we see today, though, but a decent 70 degrees, so even these astronomers throw in an additional impact event to push it the rest of the way.

3 – There Are Rings Around Uranus 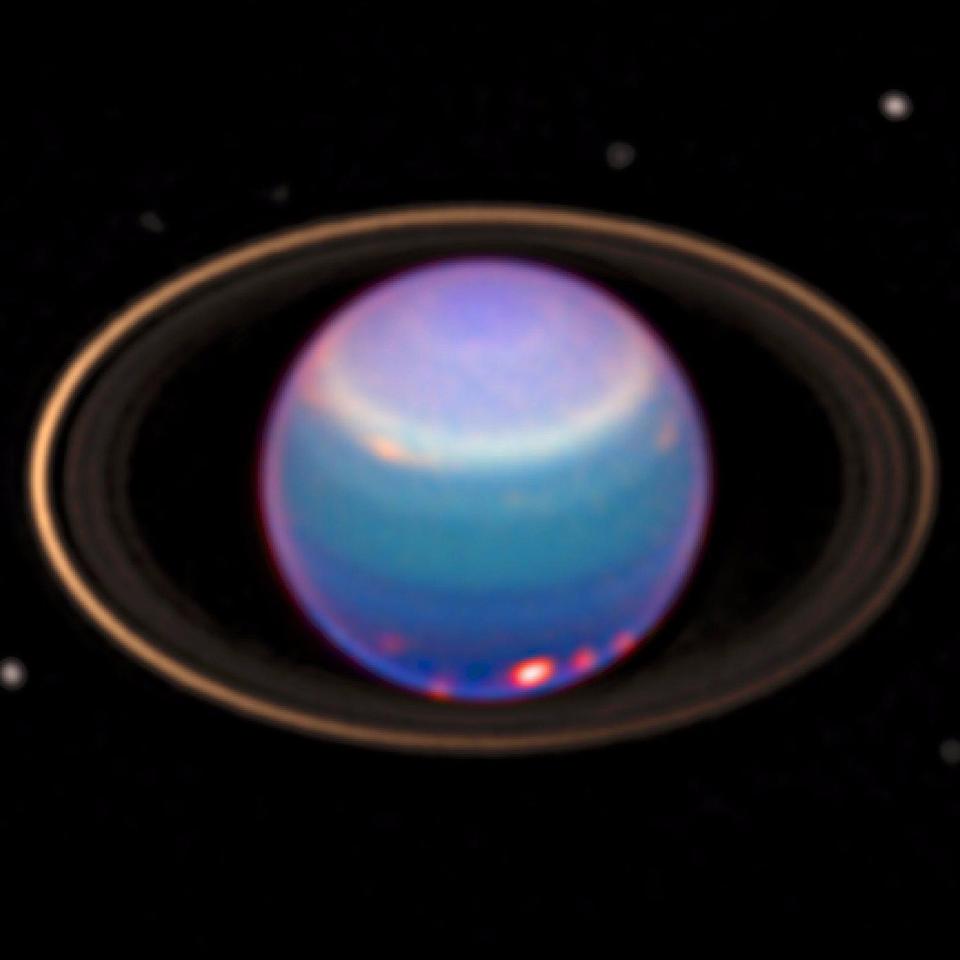 It isn’t lacking for rings today, mind you. Like Jupiter and Neptune, Uranus has a faint network of rings — 13 in total — something possibly hinted at in Herschel’s own observations, but which was perhaps more agreeably detected for the first time in 1977. Two of its 13 rings – and 11 of its 27 diminutive moons – were spotted by Voyager 2 while it skimmed above its cloud tops and flew through that escaping parcel of Uraniun flatulence back in January 1986. 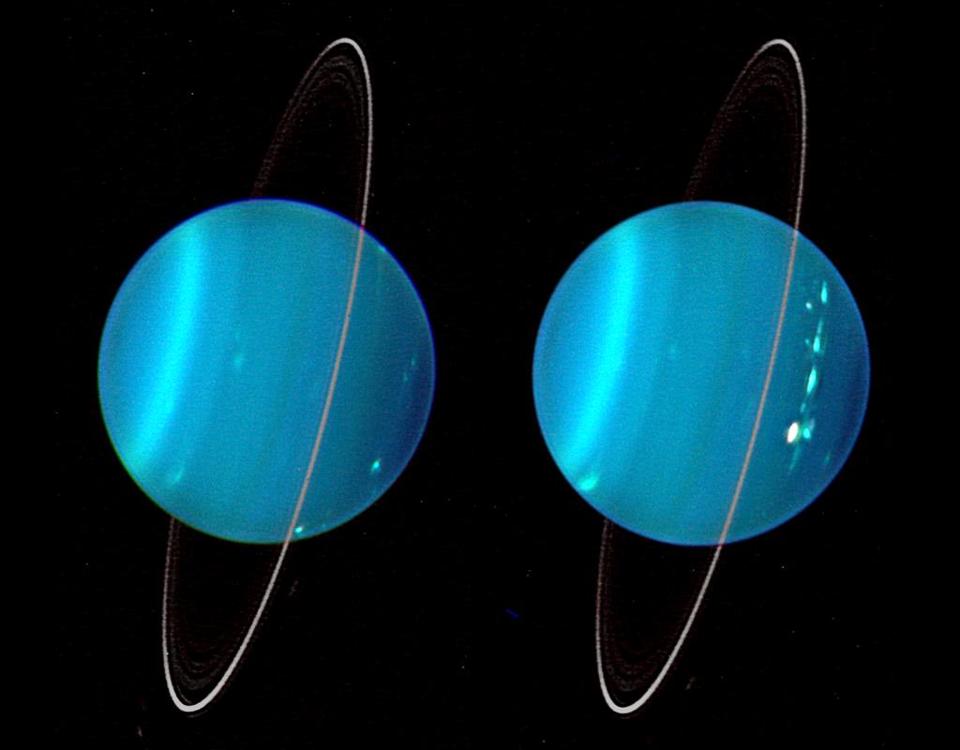 A telescopic view of Uranus.

Its rings are comprised of a mixture of water-ice and rocky material, the individual units of which can be smaller than household dust or as large as (regular) household pets. Its inner rings are thinner and darker; its outer rings are fairly bright and somewhat colourful.

4 – Uranus Can Be Very Cold, Extremely Hot and Considerably Windy

Around 80% of the mass of Uranus is comprised of water, methane and ammonia, all of which swirl around a relatively tiny rocky core. Things are decidedly frigid in the planet’s upper atmosphere, with its skies of molecular hydrogen (H2) and atomic helium (plain old He) hovering around temperatures of -214°C (-353°F).

But dive down into its vaporous interior and things inside Uranus really start to heat up. With all that gas squashing down on itself, temperatures spike to around 5,000°C (9,000°F) near the core, which is just shy of the temperature of the Sun’s photosphere, its visible surface. 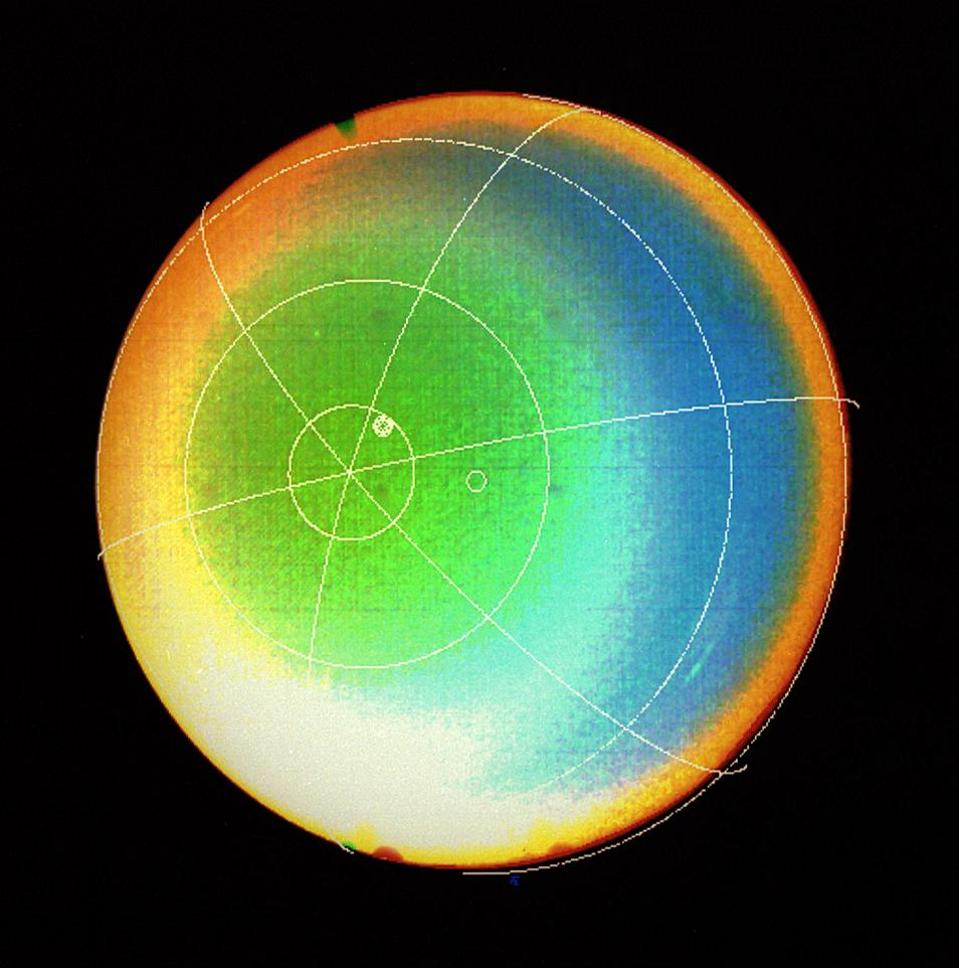 A false-colour Voyager 2 image showing that that Uranus atmosphere circulates in the same direction … [+] as the planet rotates.

Uranus also experiences some intense gusts from time to time. The record for the highest wind speed on Earth’s surface was made by a scientific instrument outpost on Barrow Island, Australia, which clocked a blast moving at 407 kilometres (253 miles) per hour during a powerful typhoon in 1996. That’s got nothing on the ice giants: winds have been observed rocketing around Uranus at speeds of up to 900 kilometres (560 miles) per hour.

This ice giant is about four times wider than Earth — or, as NASA frames it, if Earth was the size of a nickel, Uranus would be the equivalent of a softball. Uranus is also about 14.5 times more massive than Earth, so yeah, it’s no small fry when juxtaposed with our pale blue dot.

But Uranus is fairly spacious compared to the rest of the solar system’s planetary flatmates. Saturn remains the least dense planet, but even with a density twice that, Uranus comes in respectable second. Saturn would float in a bath of water spacious enough to accommodate it, but Uranus would sink, although only just.

That low density has a curious side-effect: despite its Earth-relative massiveness, the gravitational pull of Uranus in its upper atmosphere would be a tenth of that to which most of us earthlings are familiar. 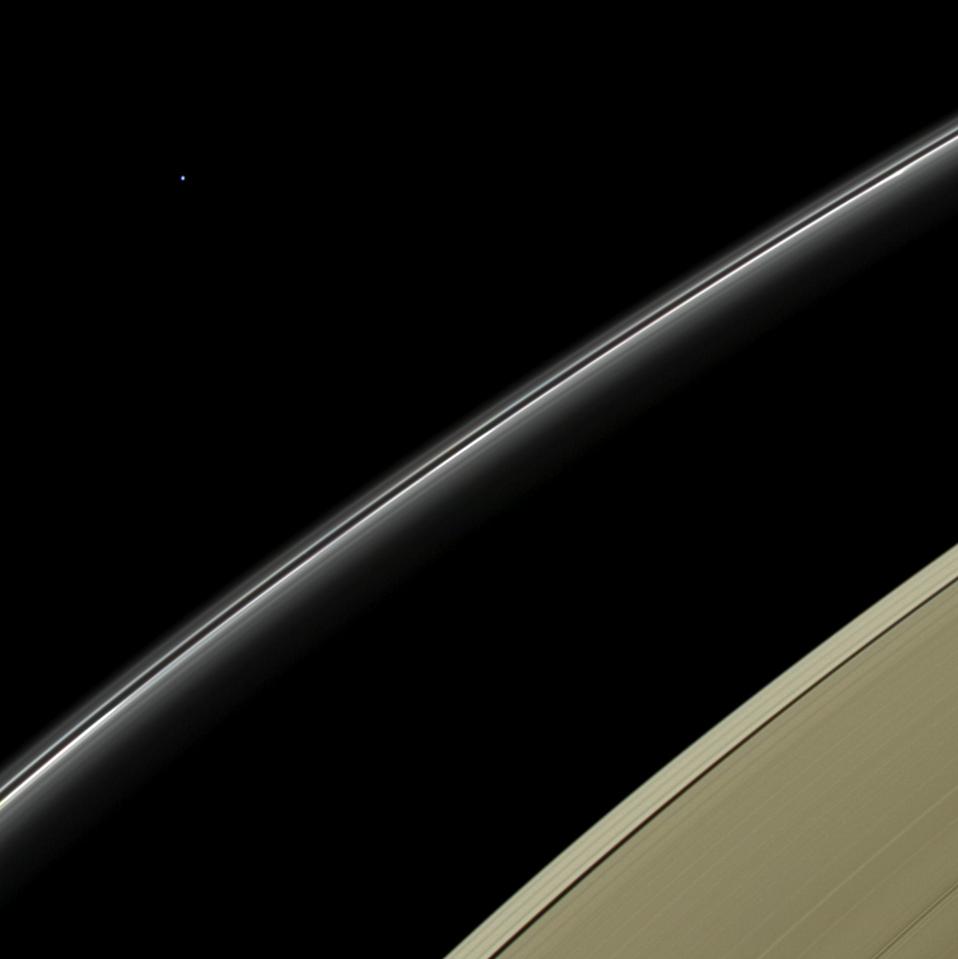 Uranus, seen here as a tiny blue speck in the background of some of Saturn’s spectacular rings.