Flaremageddon: How Satellite Mega-Constellations Could Create A New Natural Disaster 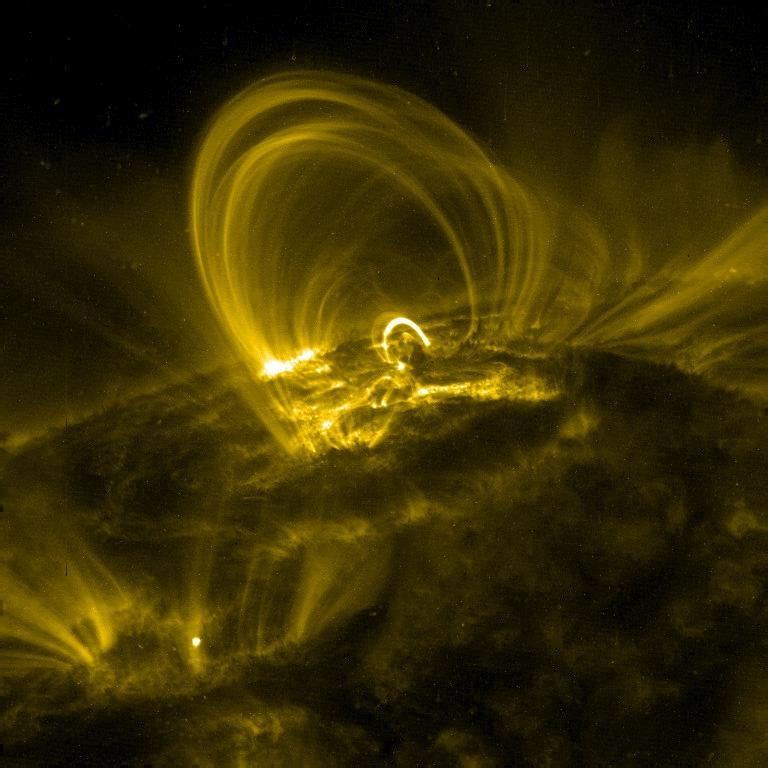 Solar coronal loops, such as those observed by NASA’s Transition Region And Coronal Explorer (TRACE)… [+] satellite here in 2005, follow the path of the magnetic field on the Sun. When these loops ‘break’ in just the right way, they can emit coronal mass ejections, which have the potential to impact Earth. A large CME or solar flare could create a new type of natural disaster: a ‘Flaremageddon’ scenario.

Over the next few years, the night sky and the volume of space that surrounds the Earth are both poised to become very different than they’ve been for all of human history. As of 2019, humanity had launched an estimated total of between 8,000 and 9,000 satellites, with approximately 2,000 of them still active. As SpaceX’s Starlink, OneWeb, Amazon’s Project Kuiper, Telesat and other companies prepare to provide worldwide 5G coverage from space (more than 300 new satellites have gone up for these purposes in the last 9 months), humanity is beginning to enter the era of satellite mega-constellations.

While media coverage has largely mentioned only one detrimental effect so far — the damage that these satellites are already causing to astronomy — there’s a second consequence that could be even more disastrous: Kessler syndrome. With tens or even hundreds of thousands of satellites in orbit, a single collision could trigger a chain reaction. With the realities of solar flares and the technological needs of mega-constellations, this new type of natural disaster may be unavoidable.

Thousands of human-made objects—95 % of them “space junk”— occupy low and medium Earth orbit. Each… [+] black dot in this image shows either a functioning satellite, an inactive satellite, or a large-enough piece of debris. The current and planned 5G satellites will vastly increase both the number and the impact that satellites have on optical, infrared, and radio observations taken from Earth and taken of Earth from space, and raise the potential for Kessler syndrome.

The idea of Kessler syndrome is a simple one: if there are too many satellites around Earth, an unfortunate collision between any two of them could create enough debris that another collision becomes inevitable. Although there is not widespread agreement on when that point will be reached, it’s widely recognized that greater numbers of larger satellites greatly increases this risk. With Starlink alone proposing a total of 42,000 satellites in three different orbital shells and many other companies sure to soon follow suit, the danger of Kessler syndrome is poised to increase by orders of magnitude over the 2020s.

In prior years, satellites were launched into orbits that were tracked and knowable, but with occasional collisions occurring due to inactive satellites whose orbits were decaying due to atmospheric drag. With mega-constellations, however, artificial intelligence will be entering the picture, and this poses a tremendous danger.

By filing paperwork with the International Telecommunications Union for the operation of an… [+] additional 30,000 Starlink satellites (in addition to the 12,000 already approved), the night sky will never be the same. If Elon Musk, Starlink, SpaceX, and the other major players in this space are serious about being good stewards of the night sky, they won’t wait for a national or international body to force them to do the right thing.

With so many objects in orbit at the same altitude, artificial intelligence will be required in order to constantly leverage the on-board thrusters to accomplish three main goals:

This last point is absolutely critical. Any two orbits at the same altitude always have two points where they will cross, and satellite drift would make a collision inevitable. Only by having the satellites correct their own courses in real-time can they ensure a collision-free scenario.

This simulated collision between a small cubesat and a proposed satellite (the Large Observatory For… [+] X-ray Timing) shows the power of even a small object to damage or destroy whatever it impacts. With typical relative orbital speeds of ~10 km/s or so, the debris created is at enormous risk for impacting other satellites as well.

But this plan comes along with a catastrophic scenario: what if the satellites are rendered non-responsive by some event? If constant orbital corrections are needed in order to avoid collisions with other satellites, the worst thing that could happen would be a scenario that paralyzed the satellites and made them unable to respond to not only the artificial intelligence, but to a manual command.

This is not some science-fiction horror scenario, but something as inevitable as the Sun itself: space weather. Events like solar flares, coronal mass ejections, and even the plain old solar wind all send charged particles away from the Sun. When they happen to get sent on their way towards planet Earth, our surface is protected by our world’s magnetic field and our atmosphere. The danger to humans or any biological organism is essentially zero, with the largest effect that commonly occurs being a spectacular looking auroral display.

The Earth’s magnetic field typically shields us from the charged particles that the Sun emits, but… [+] when magnetic connection occurs from the Sun’s field to the Earth, particles can get funneled down around the polar areas, creating a spectacular auroral show, and possibly also a geomagnetic storm if other conditions are met.

But in space, even in low-Earth orbit, the atmosphere offers no protection, and the magnetic field offers no guarantee of redirecting these particles away from satellites. According to NOAA:

Right now, the Sun is in the quietest part of its periodic solar cycle. On timescales of 11 years, the number of sunspots — which correlates directly with the odds of flaring activity and coronal mass ejections — goes from essentially zero (a quiet Sun) to solar maximum and back to zero again. Right now, in 2020, we’re just leaving the last solar minimum, with the next maximum anticipated to occur in 2024 or 2025 and every 11 years after that.

Since we first began observing the Sun and tracking sunspots, there has been an extremely regular 11… [+] year cycle for the number of sunspots observed throughout the year. The 25th solar cycle is just beginning, forecasted to reach its peak between 2023 and 2026 in all models.

There’s a tremendous danger to satellites whenever this type of space weather impacts them. If these energetic protons cause any type of electrical failure in these satellites, they will be unable to adjust their course via artificial intelligence or any other means. If they cannot adjust their course, the question of any two of these satellites colliding becomes a game of Russian roulette, where there are likely to be a series of near-misses before the inevitable — an in-space collision between two of them — occurs.

The worst-case scenario, and this scenario gets worse with every new large satellite that goes up (and every communications satellite is “large” by this metric), is that each collision increases both the likelihood and frequency of in-orbit collisions. In short order, potentially just weeks or months, the region around Earth will become a debris field, with a significant percent of existing satellites destroyed.

At present, every space disaster, including collisions and failed missions that have exploded or malfunctioned in various ways, means that there are perhaps a few hundred thousand pieces of space debris the size of your fingernail or larger. These are already hazardous to our existing satellites, with one of them colliding with the International Space Station just a few years ago, cracking a window.

But with hundreds of thousands of large satellites, a single collision could set off a catastrophic chain reaction like we’ve never seen. In short order, the number of pieces of space debris could rise into the tens of millions, impacting satellites in both low-Earth orbit and medium-Earth orbit. The first company whose satellites cause such a disaster would likely impact every other one, to say nothing of military and scientific satellites presently in orbit. Not only will satellite technology become an impossibility for decades or even many generations, but routine space launches will become an enormous gamble.

An X-class solar flare erupted from the Sun’s surface in 2012: an event that was still much, much… [+] lower in brightness and total energy output than the 1859 Carrington event, but which could have still caused a catastrophic geomagnetic storm if it had been accompanied by a coronal mass ejection whose magnetic field had the right (or wrong, depending on your point of view) orientation.

The greatest danger that the Sun poses to Earth today is a large-scale coronal mass ejection, which — if it heads right for us with the wrong magnetic field orientation — could lead to a wide-scale electrical catastrophe that could knock out power grids all over the Earth, starting fires and causing trillions of dollar in damage to our infrastructure.

However, a series of solar telescopes and observatories offers a potential solution. By monitoring the Sun:

we can monitor space weather as soon as it gets ejected from the Sun, assessing the risk to our planet while the space weather is on its way.

When a coronal mass ejection appears to extend in all directions relatively equally from our… [+] perspective, a phenomenon known as an annular CME, that’s an indication that it’s likely headed right for our planet.

This can get us up to three or four days of lead time for most space weather events, and even ~18 hours of advance notice for the most powerful, fastest-moving events of all. Whereas a coronal mass ejection needs to possess specific properties to pose a risk to Earth’s infrastructure, satellites in orbit above Earth are in a far more precarious position. In order to ensure that a solar flare directed at us doesn’t lead to Kessler syndrome, the following precautions could prevent an otherwise inevitable disaster.

When a solar flare is emitted from the Sun, all mega-constellations of satellites must enter a pre-planned “safe route” orbit. Passive orbits that are explicitly designed to maximize the distance between satellites for the largest amount of time into the future could buy us, at the very least, years of time until a collision occurs: enough time that even in the worst-case scenario, we could launch an emergency mission to intercept and de-orbit any broken satellites. But only if we build that failsafe into the infrastructure from the beginning.

The collision of two satellites can create hundreds of thousands of pieces of debris, most of which… [+] are very small but very fast-moving. If enough satellites are in orbit, this debris could set off a chain reaction, rendering the environment around Earth practically impassable.

If we fail to prepare, a “Flaremageddon” natural disaster scenario becomes easy to envision. Imagine that it’s 2025, and we have over 10,000 new mega-constellation satellites up there, with a series of sunspots appearing around the Sun’s equator. A magnetic reconnection event occurs, launching an X-class solar flare with a coronal mass ejection right at Earth. The magnetic field is oriented so that a geomagnetic storm occurs, knocking out some major electrical grids in the process.

But in space, a large fraction of satellites get bombarded by these energetic particles from the Sun, causing them to become non-responsive. 8 days later, the first collision occurs. While humanity scrambles to respond appropriately, the second collision occurs, and the chain reaction begins. By 2027, the International Space Station is abandoned, and the Hubble Space Telescope is destroyed. It’s an entirely avoidable disaster, but unless we get ready for it now, it may be too late when the critical moment arrives.

A Second Princess Cruise Ship Is Affected By...