Another wave of demonstrations kicked off across the globe on Saturday, with tens of thousands—from Germany and France to Mexico and Australia—turning out in solidarity with U.S. protesters against the death of George Floyd, while also denouncing racism and police brutality within their own countries. 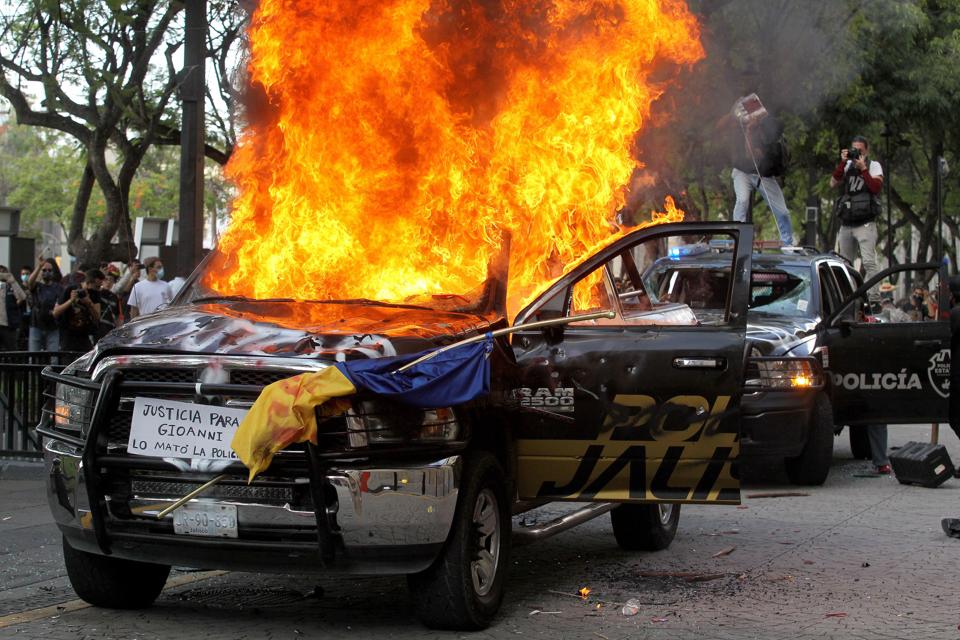 Demonstrators burn police vehicles during a protest in Guadalajara.

In London, tens of thousands of people peacefully gathered in Parliament Square on Saturday afternoon, holding signs paying homage to George Floyd, before demonstrating in front of the U.S. embassy.

A fresh wave of anti-racism protests kicked off across Germany on Saturday, filling up cities like Berlin, Dusseldorf, Cologne and Nuremberg.

Protesters in Mexico City vandalized the U.S. embassy, which has been put on lockdown, while in Guadalajara they clashed with police—and one officer was even set on fire (he survived).

Hundreds of Brazilians rallied against racism in the coastal city of Recife, after the death of a five-year-old black boy—while under the care of a white woman—triggered social unrest.

Despite French authorities banning people from gathering in front of the U.S. embassy in Paris, thousands showed up anyway during the afternoon, as well as near the Eiffel Tower.

In Australia, a court ruled late on Friday that marches could not be held given the need for social distancing amid the coronavirus pandemic. But a higher court reversed the order in a last-minute decision on Saturday, allowing demonstrations in Sydney and other cities, like Melbourne and Brisbane, to continue.

Large crowds gathered in cities across the United States on Saturday for the 11th straight day of protests against police brutality and racism. Demonstrations have taken place all over the world since last week, including in Japan, Denmark, Sweden, Zimbabwe and Kenya.

Mass Protests Across The U.S. Have No Impact On Stocks, What Gives? (Forbes)

Unique Opportunity: Apply Here For A (Forgivable) PPP Loan Up To $2 Million