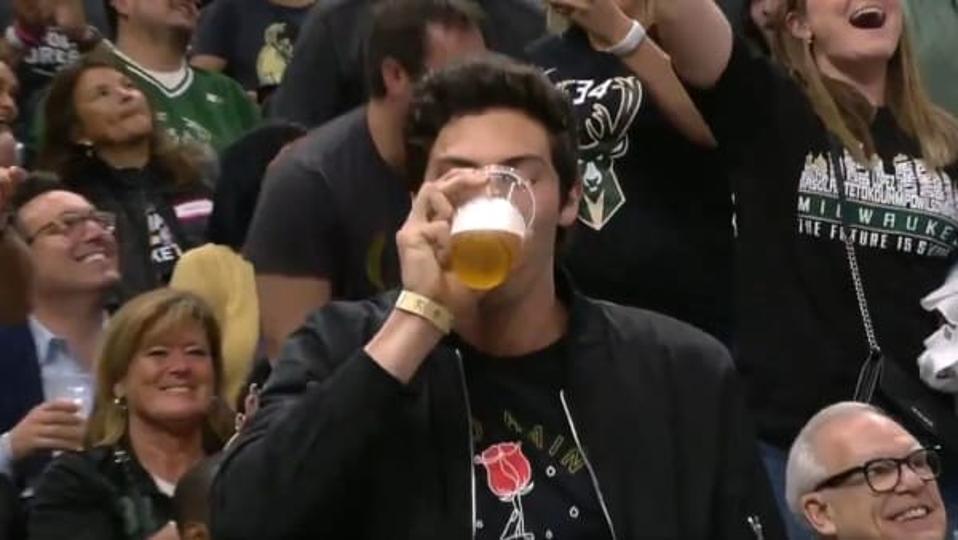 Christian Yelich became a true Milwaukeean when he chugged a cup of the product that made the city … [+] famous during the NBA Playoffs. Now with a nine-year contract extension, he and the city will be connected for the rest of his career.

Christian Yelich’s on-field exploits during his first season with the Milwaukee Brewers had already made him a beloved fan favorite in the city before attending Game 5 of the NBA’s Eastern Conference Finals series between the hometown Milwaukee Bucks and the Toronto Raptors.

Earlier in the Bucks’ playoff run, Green Bay Packers offensive lineman David Bakhtiari drew a standing ovation for his beer-chugging abilities and after Packers quarterback Aaron Rodgers put forth a lackluster attempt, the cameras found Yelich, the reigning National League MVP, who followed suit and quickly emptied his own cup of the product that made Milwaukee famous, to the absolute delight of the hometown crowd.

That was the moment Yelich truly became a Milwaukeean.

And now, after signing a nine-year, $215 million contract extension, Yelich and the city will be connected for the rest of his playing career.

“I’ve said it a few times; I’ve only been here two years but it feels like it’s been a lot longer,” Yelich said Friday morning as the deal was officially announced prior to his Cactus League debut. “Ever since I came here, it just felt like a natural fit. I’m really glad that I’m able to spend the foreseeable future here, the rest of my career as a Milwaukee Brewer.”

“I formed a connection with the community, my teammates. Everyone from the ownership in the front office on down. As a player, that’s what you want, something that feels organic. It felt right to me. I didn’t really have aspirations to play anywhere else.”

As star players in any sport start to approach potential contract years, they’ll always diplomatically credit their team and city, saying it’s someplace they’d love to spend the rest of their careers.

Often times, it’s just lip service; a diplomatic response to a question that is almost always answered more by dollar signs than sentimentality.

For Yelich, however, there was nothing disingenuous about his appreciation for the way the Brewers, the city of Milwaukee and the state of Wisconsin as a whole had embraced him during his two seasons with the team.

Yelich, a native of Southern California who spent the first few seasons of his big league career in Miami, had heard enough good things about the organization and the community ahead of the January 2018 trade from the Marlins that he wasn’t surprised to have found a comfort level in Milwaukee but the speed of the connection, not to mention the depth of that connection, admittedly caught him slightly off guard.

“I’d be lying if I didn’t say I was a little surprised but I always heard great things,” Yelich said. “People always spoke highly of playing in Milwaukee, the atmosphere at the ballpark and just the culture of the organization. I’m not too surprised after I got here and got to know everybody.

“It’s been a great fit from day one.”

Aside from providing residents with on-field entertainment, Yelich has invested in the community off the field, as well. He and teammate Ryan Braun partnered up to invest in a massive redevelopment project in Downtown Milwaukee last season and has been part of any number of team-sponsored charitable efforts, like making visits to patients at Children’s Hospital of Wisconsin — who, after his season-ending injury last September, wanted to return the favor — and countless other activities that have often gone without notice.

“What everybody sees on the field is an MVP,” Brewers chairman and principal owner Mark Attanasio said “We have that same MVP when it comes to the leadership Christian brings, the kind of teammate he is and the selfless things he does in the community — many of which aren’t visible because he really doesn’t look for attention. He does countless things privately in the community that no one knows (about) and often times, I hear (about them) after the fact.

“When you look at a commitment like this for our organization, it couldn’t be given to anyone more deserving than Christian. I don’t think there’s anything better for our community, for Milwaukee or for Wisconsin, than having Christian be an interagal part of us.”

Yelich has also been a big part of baseball’s efforts to better market its young stars. He’s been featured in the league’s “Let the Kids Play” campaign and also appeared in another MLB commercial with 2019 NL MVP Cody Bellinger.

And as one of three Most Valuable Players playing for Wisconsin teams — along with Rodgers and the Bucks’ Giannis Antetokounmpo — he’s helped give Milwaukee itself more exposure, like when he accepted an invitation from Bucks guard Pat Connaughton to take part in the NBA’s All-Star Slam Dunk Contest last month.

“There’s definitely been a lot of cool opportunities,” Yelich said.

There will likely be many, many more for Yelich over the course of his new contract but there’s one he wants more than anything: a championship for himself, his team and, most importantly, his hometown fans.

“(Milwaukee) is just a really special place to play,” Yelich said. “Our goal here is to bring a World Series to Milwaukee and to the Brewers organization. We’re now going to have that opportunity over the next nine years.”

3 Record-Breaking Numbers That Sum Up The Economy Right Now

Most Of Canada’s Recent New Cases Of COVID-19 Are Linked To The U.S.

With COVID-19 Coronavirus Social Distancing, What To Do...

Offseason Moves Give White Sox A Boost Of...