For Now, Los Angeles Belongs To Kawhi Leonard And The Clippers 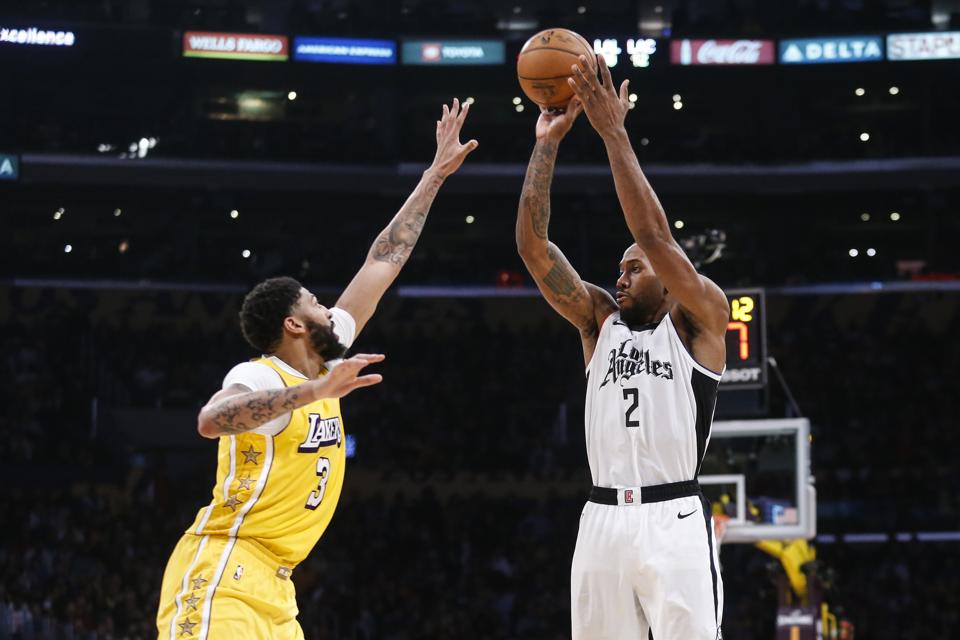 For the second time in a two-month span, Kawhi Leonard guided the Los Angeles Clippers to a victory over the more popular and prestigious Lakers. Back in August, when the NBA league office created the schedule and placed the L.A. franchises against each other on two of biggest marquee dates (opening night and Christmas), they knew it would draw intrigue.

After all, it was the most obvious way to draw eyeballs. Both teams were fresh off superstar acquisitions and launched into the “championship contention” tier right away. The cherry on top of this city rivalry was certainly the dynamic between Leonard and one of his fiercest competitors, LeBron James. Although one is six years younger and has eight fewer seasons under his belt, their Finals history and current geographical proximity allow it to become a major storyline.

The personalities between Leonard and James are polar opposites. Their playing styles aren’t too similar. But every time they have stepped on the same floor after 2014 – when Leonard was starting to knock on the door as a top-flight offensive force – it has turned into an entertaining spectacle. Some of the greatest “must-watch” minutes in sports occur when a superstar in his prime is constantly coming for the neck of a veteran trying to stay on top of the player pyramid. We saw a large sample of it during the first two Warriors-Cavs Finals, and neither series disappointed. Stephen Curry was at the peak of his powers, while James was doing everything he could, hanging on to the mantle for dear life.

If the first two meetings between the new-look Clippers and Lakers have showed us anything, it’s that Leonard clearly has the upper hand when going toe-to-toe with James. There is a subsection of fans and media members that believe James is still the NBA’s most impactful and reliable player throughout a single regular season. It could be the case for 78 games out of the year.

But, regardless of which team he’s on, when Leonard takes the floor across from James and the national audience is tuned in, he’s outplayed him. So far, this season is a continuation of what we’ve seen dating back to the 2014 Finals. During the opening night showdown on Oct. 22, Leonard scored 30 points in 32 minutes and was picking apart the Lakers’ defense with his mid-range (6-of-10 from that zone). In the Christmas rematch, he dropped 35 points and switched his attack to the three-point arc, nailing 5-of-7 from deep.

Overall, in the two games they’ve played against each other since it became an L.A. rivalry, one has the advantage:

In his career, Kawhi is 15-8 vs. LeBron. Obviously, head-to-head records aren’t how players should be compared. It especially gets hairy when you take into account Leonard’s career trajectory – eight of those 23 games were before the 2013-14 season and Leonard was just a young role player on one of the most versatile teams in NBA history (San Antonio).

Since the 2014 Finals, though, Leonard is 12-4 against James. That includes games with the Spurs after his offensive breakthrough, one meeting in Toronto, and the two Clippers-Lakers games thus far. In all of their regular season matchups, James has only shot 30.2% on 4.8 three-point attempts per game, while Leonard has drilled 37.1% of his 5.6 attempts. Very rarely can anyone in the mix for “best player on Earth” say they have a winning record versus LeBron while shooting better in every facet (from the field, three-point range, and the free throw line).

Superstars just haven’t had this level of success against the guy who might be having the greatest career in NBA history. Until now.

James wasn’t at 100% in the Christmas Day game, dealing with soreness that kept him out of the Lakers’ previous game versus Denver. It was compounded in the first quarter on Wednesday when Patrick Beverley’s knee inadvertently made contact with James’ groin area, re-aggravating it. James still finished the game and even connected on a couple of threes in the fourth quarter, but his night was disappointing overall.

The Clippers were down 15 at one point in the third quarter, mostly due to a poor offensive strategy and the Lakers being on a string defensively. The Clippers weren’t generating nearly enough outside looks (being doubled up in three-point attempts in the third quarter is never a good sign in the modern NBA). But the Lakers deserved immense credit for stifling a lot of the Clippers’ drive-and-kick opportunities.

One play that stood out during the Clippers’ comeback was a combination of Leonard’s defensive acumen, the ability to draw attention on the break, and eye for playmaking. With about eight minutes left in the third quarter, the Clippers were in zone coverage against the Lakers’ lineup of Bradley-Green-James-Davis-McGee. The two defenders at the top of the key were Leonard and Patrick Beverley.

As Bradley gets stonewalled on his penetration attempt by Paul George, he kicks it out to Davis following a screen. Helping completely off James a few feet away, it’s Leonard that steps over and catches Davis off guard when he spins toward the middle:

Trailing behind him is Ivica Zubac, a center who the Lakers essentially gifted to the Clippers via trade last February. Realizing Leonard is is going to attract multiple bodies (and that Davis is trying to track him down to make up for the mistake), Zubac fills the lane to make himself available. Leonard, holding a career-high 27.9% assist percentage, waits until he gathers and sees both James and Davis fully committed to him. It results in a three-point play for the Clippers’ center, which continued to cut into the deficit.

It wasn’t until midway through the fourth quarter that Leonard propelled the Clippers to the lead. He scored 11 of the team’s 25 points in the period, including a perfect 6-of-6 from the foul line.

On top of having the edge (for now) in any tiebreaker scenario moving forward, the Clippers followed up on their statement win from October. Both teams have spent the last two months trying to jell, spark good habits, and figure out which style they prefer playing. For the first time practically all season, both rosters were at full strength and feeling confident about the matchup.

And for the second straight meeting, the Clippers stayed resilient enough to overcome a double-digit deficit. Wednesday also marked the first time this season of the Clippers surpassing the Lakers in Net Rating (point differential per 100 possessions). That’s despite the Lakers getting off to a blistering start and being two games ahead in the standings.

In the evidence we’ve been provided through 96 total minutes of basketball between the two, it can’t be denied that Kawhi is performing at the highest level of any player in Los Angeles.

There is still time for LeBron and company to write their own chapters in this story. But for those looking for a betting favorite to escape the Western Conference in May, Christmas only reinforced what we’ve seen between Kawhi and LeBron over the last few years.

How Soaring Returns Could Ruin Retail

Justin Bieber Acknowledges Imperfect Past, Looks To The Future With 2020 Comeback

Sorensen And Special Teams Turn The Tide In...

Intro To Barcelona Math: How To Make Revenue...

Small Business Lessons From “Be A Lady They...