Breaking
Bernie Sanders Warns Republicans ‘Will Win’ In 2022...
5 Tips For Virtual Networking Success
10 Ways Covid-19 Vaccine Supply Chains Need To...
Here Come The Workers: 4 Steps To Take...
First Electric Car? Consider These Four Big Upsides...
What’s Missing From Howard Marks’ “Something Of Value”
A 10 Billion-Year-Old ‘Super-Earth’ Has Been Found In...
David Einhorn Warns Of Danger From Valuation-Indifferent Investors
How Safe Is Your Stock Portfolio Over 30...
Technology Is Rapidly Changing Cancer Care
4 Major Market Changes In 2020 That Can...
Boston Globe Starting “Fresh Start” Initiative As Part...
Can Money Protect You From Covid-19? It May...
The Most Important Voice In Artificial Intelligence: Frontline...
How to Start an Online Store
Amazon’s Small Business Empowerment Team Is Helping Entrepreneurs...
Home Technology ‘Forever Chemicals’ In Your Drinking Water, It Is Worse Than Previously Thought
Technology 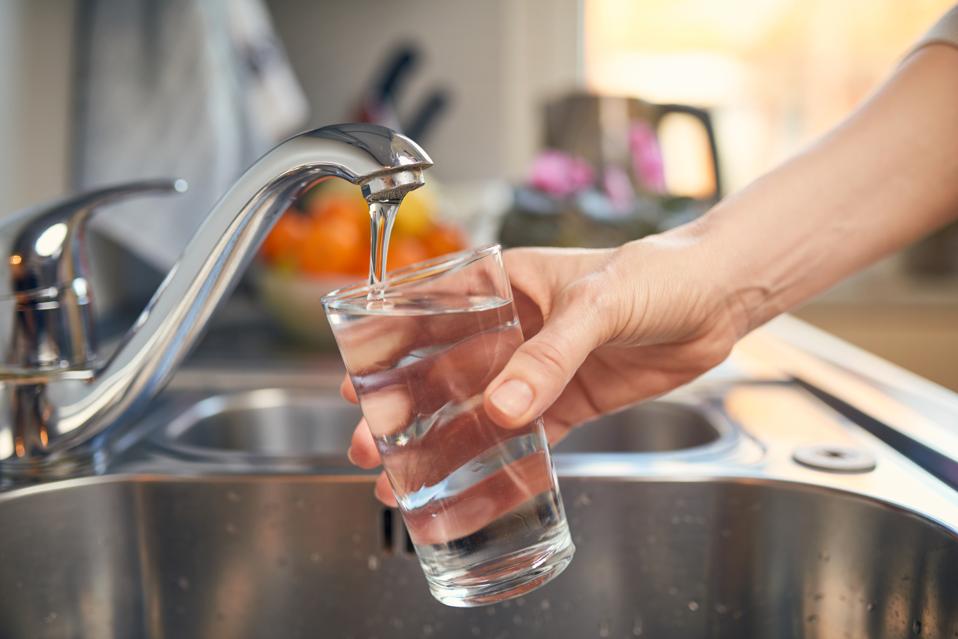 How much PFAS is in that glass? (Photo: Getty Images)

Nothing lasts forever. Except for perhaps that drunk text that you sent and PFAS in your drinking water.

No, not pee, but something pronounced “pee-fas.” PFAS stands for per and polyfluoroalkyl substances. These are the Keith Richards of chemicals, known as “forever chemicals” because they can survive for years without really breaking down. This means that they can continue to build up in your blood as you drink them. And if you happen to drink water because you are human and not a robot, a new report from the Environmental Working Group (EWG) has got some bad news for you.

Here is a video that accompanied the report:

As you can see, the report entitled “PFAS Contamination of Drinking Water Far More Prevalent Than Previously Reported” found exactly that. Testing coordinated by the EWG last year revealed much higher levels of PFAS in drinking water than found by Environmental Protection Agency (EPA) testing performed from 2013 to 2015. And you really don’t want anything that begins with pee in your drinking water.

At least pee is natural. PFAS are not. They are chemicals that are used for a variety of functions such as coating your carpets, clothing, shoes, microwave popcorn bags, fast-food wrappers, and dental floss. Yes, depending on the brand of floss you use, you may be flossing PFAS into your mouth. Try telling that to your dentist the next time he or she questions why you don’t regularly floss.

If something is waterproof or stain-repellent, like stuff that has Teflon, Scotchguard, or Gore-Tex, there is a decent chance that it has some kind of PFAS. PFAS ain’t just one thing but a family of nearly 5,000 different types of chemicals. And this is a very dysfunctional family. According to the EWG, studies have shown that when levels of PFAS in drinking water creep above one part per trillion, humans may start having some problems. 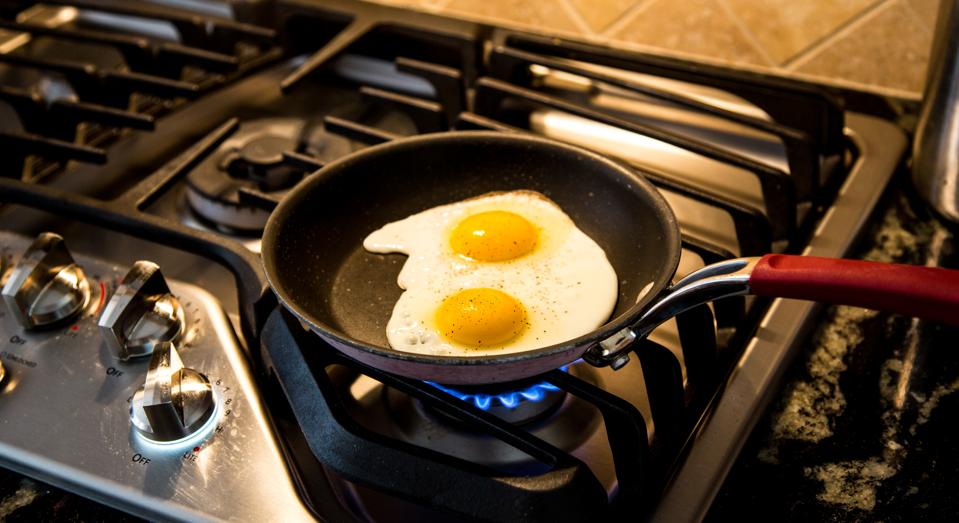 Would you like some PFAS with those eggs? (Photo: Getty Images)

You don’t want PFAS in your blood or in your body. They may increase your risk of low birth weight, as indicated by the EPA. After you are born, it isn’t necessarily smooth sailing. The Centers for Disease Control and Prevention (CDC) Agency for Toxic Substances and Disease Registry lists other bad health effects such as interfering with your hormones, increasing your cholesterol levels, screwing around with your immune system, and increasing your risk of certain cancers. Bottom line, if someone offers you PFAS in your water, say, “no thanks.”

The trouble is right now you may not have any choice. The report authored by Sydney Evans, David Andrews, Ph.D., Tasha Stoiber, Ph.D., and Olga Naidenko, Ph.D. from the EWG painted a grim picture. From May to December 2019, EWG staff and volunteers collected samples of tap water from 44 places in 31 states and the District of Columbia. They then sent these samples to an accredited independent laboratory, which checked the samples for 30 different PFAS chemicals. This is far from all of the possible PFAS. 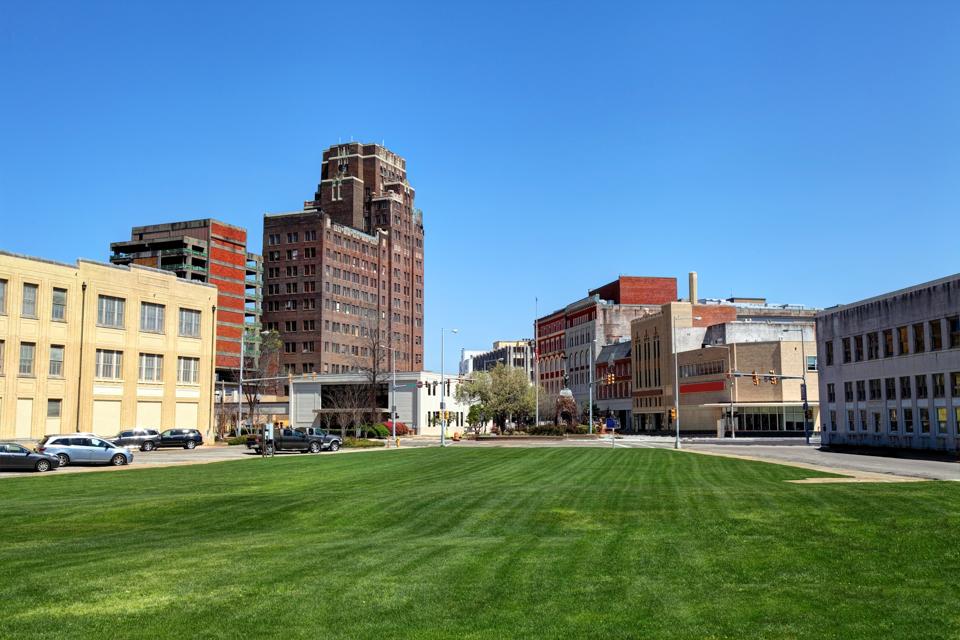 Meridian is the sixth largest city in the state of Mississippi. (Photo: Getty)

Guess how many locations had no detectable PFAS? One. Meridian, Mississippi. Yes, that Meridian, home of the only remaining two-row stationary Dentzel menagerie. Meridian also happens to get their drinking water from very deep wells.

Guess how many locations had PFAS levels below one part per trillion threshold? Three. Yes, only two other locations besides Meridian fell below this threshold. That’s Seattle, Washington, and Tuscaloosa, Alabama.

Memphis, Tennessee was right at 1.0 parts per trillion, but all other tested locations fell above this threshold. For example, New York City had a level of 2.3 parts per trillion, which was still significantly lower than Las Vegas, Nevada’s 6.5. Pittsburgh, Pennsylvania, was on top of Sin City at 8.4. The City of Lakes, Minneapolis, Minnesota, was even higher at 14.2. The nation’s capital, Washington, DC, trumped this number at 21.7. The Big Easy, New Orleans, Louisiana, easily topped the aforementioned with a 41.8 reading. The City of Brotherly Love, Philadelphia, Pennsylvania, gave much PFAS love at 46.3 parts per trillion.

And here’s further evidence of how forever these PFAS can be. Bowing to EPA pressure, companies have already phased out the use of perfluorooctanoic acid (PFOA) and perfluorooctanesulfonic acid (PFOS). Yet, the EWG study found PFOA in 30 and PFOS in 34 of the 44 samples. In fact, according to the report, these two bleeping chemicals constituted a quarter of the total PFAS in each of the samples. What the PFOA and PFOS?

All of this is quite different from what the EPA had found when it last conducted nationwide testing of public water systems for PFAS between 2013 and 2015, back when there was still only one Jumanji movie around. That testing showed no detectable levels of PFAS in 36 of the 43 water systems tested. Why the difference? Well, the EWG report pointed out that the EPA had tested for much fewer PFAS compounds and did not show the full spectrum of PFAS contamination levels.

Surely, there will now be action to reduce PFAS contamination. After all, doesn’t our country act quickly once it finds a unhealthy pollutant around? Yeah, this isn’t United Fantasy Land. Dr. Smolder Bravestone and Ruby Roundhouse can’t just yell Jumanji to save us. The EPA has known about the PFAS in drinking water problem for how long now? Ah, that’s right, since 2001, back when The Rock was still a full-time wrestler and just a pebble of a movie star. In all those years, has the EPA imposed any type of nationwide PFAS limit that can be enforced? No. They did issue an advisory back in 2016 that over 70 parts per trillion of this PFAS stuff in your water is not good. But that’s can be like telling non-smokers in a room full of smokers that cigarette smoke isn’t good.

Some states have set their own limits. For example, New Jersey did set a 13 parts per trillion limit for one of the PFAS: perfluorononanoic acid (PFNA). Nonetheless, the EWG report had the Bergen County, New Jersey, sample at 51.4 parts per trillion of PFAS. As the Dire Straits sang, that ain’t working.

Your handy dandy typical water filter isn’t going to help you either. No, instead you’ll need some type of granular activated carbon, ion exchange, or reverse osmosis technology to get PFAS out of the water. These are expensive technologies that you likely don’t immediately have on hand. So if you are at a bar and want some water, forget about asking for some reverse osmosis with your water.

What if you just stick with bottled water, keep your mouth closed in the shower, and just eat everything very dry? That may not work either. It ain’t clear how much PFAS may be in bottled water, since there is no real mandate to test bottled water for PFAS. If someone tells you that their bottled water is free of PFAS, how would you really know? Oh, and if you are thinking of drinking nothing but soda for the rest of your life, that’s a terrible idea. Plus, guess what is used to make soda? It rhymes with water.

Are you PFAS-ed off after reading this report? If so, maybe you should push for more PFAS testing and reporting and for the federal government to set some type of limits on PFAS levels. Because “water” we doing if we aren’t even getting a better handle on this issue?

The Room Where It Happens—Life In A Basketball Centric Conference

Inside ‘Little America’ On Apple TV+