Breaking
OpenSooq, The Best Website to Buy Used Cars...
Hot Tips to Reduce MacBook Pro Fan Noise
How to Make the Most Out of Your...
7 Examples Of Using AI For SEO
Why you Should Always Try the Demo Slots...
How to Launch a New Restaurant Business
Start the Year Debt Free
How to clear a browser cache on a...
Which are the best software providers of slots...
How Investing Can Help You Save For Retirement
Top progressive betting strategies for slot machines
Key Software Tests to Conduct Before Product Launch
Why so many people play slots online in...
Why businesses should prioritise Cyber Security
What You And Your RTO Business Need To...
4 SEO Trends for Websites You Should Not...
Home General Forget $1,400 Stimulus Checks, Here’s What’s Missing From Biden’s $1.9 Trillion Stimulus Package
General 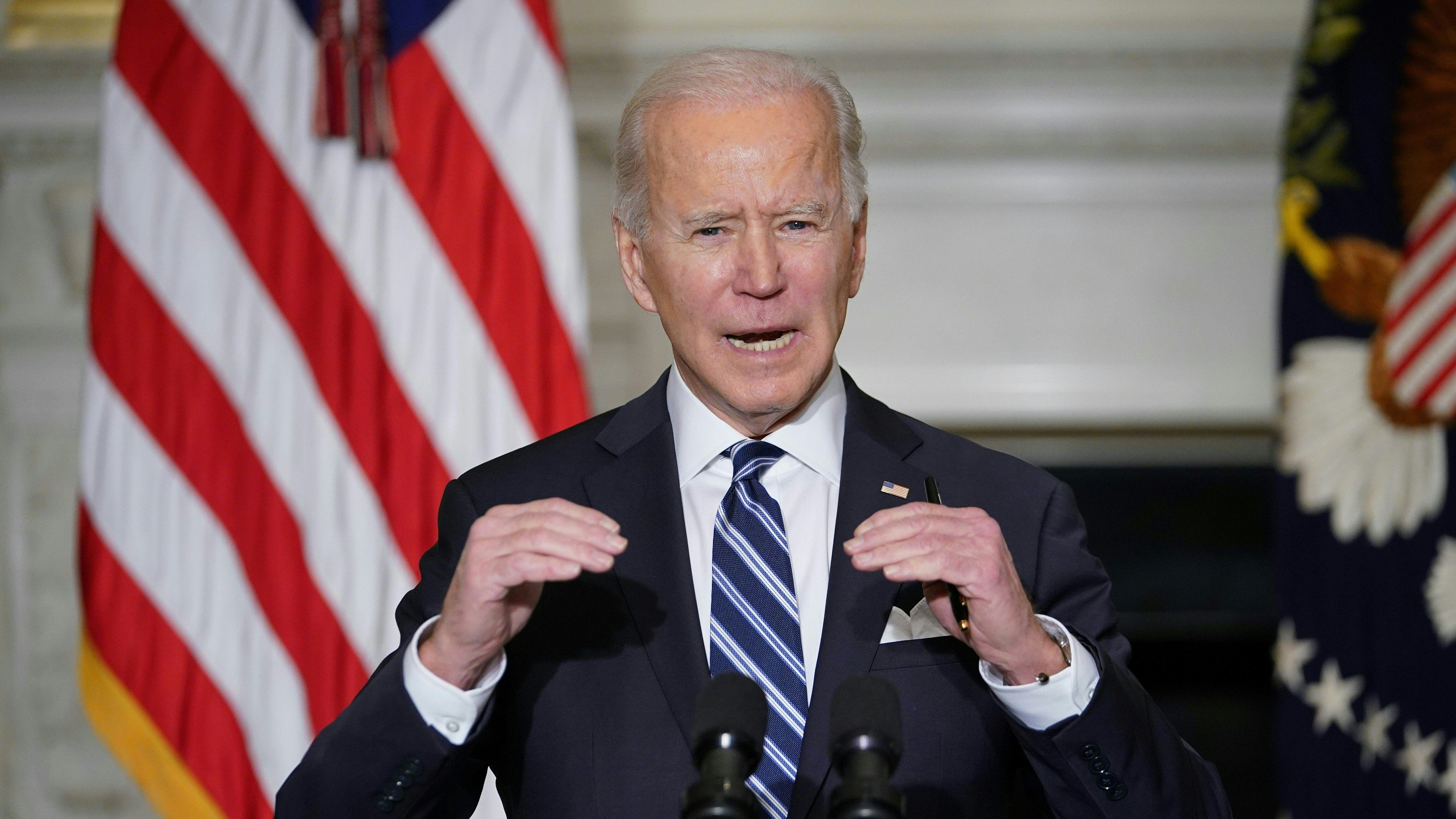 It appears that President Joe Biden and Congressional Democrats will aim to use a budget maneuver known as reconciliation to pass a $1.9 trillion stimulus relief package in early March. While this is a prudent move, and one that will get appropriately sized stimulus out quickly, Democrats need to think strategically so they don’t squander the once-a-budget-year reconciliation tool. Specifically, while the focus has been on $1,400 stimulus checks and who will be eligible to receive them, the biggest gap in the current relief plan is a lack of explicit automatic stabilizers that would extend unemployment benefits without additional Congressional action if the economy continues to sputter.

Biden’s stimulus package, The American Rescue Plan, now proposes extending enhanced unemployment support through August 29, 2021 and increasing the enhanced federal unemployment benefit from $300 per week to $400, according to a White House briefing. “A crisis of deep human suffering is in plain sight,” Biden said. “We have to act and we have to act now.”

While the five-plus month extension on unemployment aid is needed, it may not be enough given recent economic data suggesting a slow economic recovery. U.S. employers added only 49,000 jobs in January and the long-term jobless—those who have been out of work for more than six months—now account for close to 40 percent of all unemployed workers. “It’s very clear our economy is still in trouble,” said Biden. If the economic recovery falters later in 2021, Congress will be forced to take up another relief bill to prevent millions of Americans from reaching an unemployment benefit cliff at the end of September, much like what happened at the end of 2020.

But there is a way to prevent an abrupt end to benefits: the use of automatic stabilizers. Automatic triggers would gradually phase out unemployment aid over time, but only based on economic conditions.

Automatic Stabilizers Should Be An Explicit Part of Stimulus Package

Since the coronavirus pandemic first ravaged the economy, there has been a disconnect between the sluggish speed of recovery and the duration of enhanced unemployment benefits that Congress passed. This problem could have been solved through the use of automatic stabilizers, which would have tied federal aid to economic conditions, but neither the March 2020 Cares Act nor the relief bill passed at the end of 2020 included them.

Implementing stabilizers would remove the need to continuously pass additional legislation for more aid. Instead, they would automatically extend aid, such as enhanced unemployment insurance, until the economy recovers. “Automatic stabilizers are really an essential and important part of making sure the economy can work on a continuing basis,” Zach Moller, Deputy Director of the Economic Program at center left think tank Third Way, noted in an interview.

Stabilizers essentially put benefits on autopilot and provide families with a degree of predictability. By tying benefits to economic conditions, it also removes the unemployment fiscal cliff, instead weaning workers off assistance more gradually.

Biden Gave A Nod To Stabilizers, But They Aren’t Currently Included In The Stimulus Bill

Biden’s public statements focused on extending unemployment benefits for six months and increasing the federal booster from $300 per week to $400 (note that in the draft proposal released on February 8, 2021, the language only indicates an extension until August 29, 2021, which would be shorter than six months). In a January 20 White House briefing announcing the American Rescue Act, the Biden administration did give a nod to automatic triggers. The President “will work with Congress on ways to automatically adjust the length and amount of relief depending on health and economic conditions so future legislative delay doesn’t undermine the recovery and families’ access to benefits they need,” it noted.

Treasury Secretary Janet Yellen also reiterated support for the concept during testimony at the United States Committee on Finance. “Automatic stabilizers play a critical role in mitigating the negative impacts of recession,” she said. “I am eager to work with Congress on ways to automatically adjust the length and amount of relief depending on health and economic conditions so future legislative delay doesn’t undermine the recovery and families’ access to benefits they need,” Yellen added.

More recently, Biden omitted any mention of automatic triggers in a recent address on February 5. The same day, Jared Bernstein, a member of the Council of Economic Advisors, was asked explicitly by a member of the press corps about including automatic stabilizers in the stimulus bill. “Right now, you know, we’re kind of past the stage of thinking about — right now, we’re really at a point where we have a package that is calibrated to meet the urgency of the moment, and that’s the American Rescue Plan,” he responded. “So that’s what we want to focus on. There are all kinds of interesting policy discussions we could and should have, and I think that’s one of them. But for now, what we need to do is get this package out there and meet the urgency of the moment.”

Indeed, late Monday evening, House Ways and Means Committee Chairperson, Richard Neal (D-Massachusetts), released a draft of the unemployment provisions in the bill. It confirmed the extension of benefits, but only until the end of August, and the proposal to raise the federal weekly benefit to $400. It was silent on automatic stabilizers.

While these are nice sentiments, the reality is that leaving the fate of unemployment benefits to the whims of “working with Congress” is a Sisyphean task. For example, despite even starker economic conditions and millions of Americans suffering under crippling unemployment, Congress failed to pass a second relief bill for months last year. Even today, with a Democratic Congress and White House, passing most legislation later in the year will require some Republican support, unless Democrats are willing to go nuclear and eliminate the filibuster.

Reconciliation Is A Once-A-Budget-Year Opportunity

One way to skirt some of the friction of getting a bill through Congress is to leverage reconciliation. “Reconciliation is a process to make budgetary changes that allows you to avoid dealing with the Senate filibuster,” said Moller of Third Way, who was a former Democratic staffer on the Senate Budget Committee.

Senate rules usually allow for virtually unlimited debate, which is why filibusters have been an effective tool; however, reconciliation is different. Most importantly, it limits debate to 20 hours, which makes filibusters moot and allows for bills to be passed quickly and with a simple majority vote.

However, there is an important caveat that has significant implications for automatic stabilizers. “Under Senate interpretations of the Congressional Budget Act, the Senate can consider the three basic subjects of reconciliation — spending, revenues, and debt limit — in a single bill or multiple bills, but it can consider each of these three in only one bill per year (unless Congress passes a second budget resolution),” writes The Center on Budget and Policy Priorities. “This rule is most significant if the first reconciliation bill that the Senate takes up affects both spending and revenues. Even if that bill is overwhelmingly devoted to only one of those subjects, no subsequent reconciliation bill can affect either revenues or spending because the first bill already addressed them,” it added.

In other words, reconciliation needs to be thoughtfully considered and strategically deployed. If the American Rescue Plan is passed using reconciliation and doesn’t include automatic stabilizers, Biden may not be able to use the technique to pass additional aid in August or September before unemployment benefits expire.

Budget reconciliation is based on fiscal years, not calendar years. Therefore, there could be two budget reconciliations in 2021. “Since Congress did not pass a budget resolution for Fiscal Year (FY) 2021, Democrats can pass a FY 2021 budget resolution in the first 100 days of the new administration, and then turn to the FY 2022 budget resolution,” according to Holland & Knight. However, the second budget resolution likely won’t be passed until late spring and won’t “be fully reconciled until fall 2021,” which could imperil continuous unemployment benefits. It also means that Senate Republicans may be able to hold the extension of unemployment benefits beyond September hostage because Democrats would need 60 votes to pass any additional legislation.

Therefore, it behooves Biden to codify automatic triggers in the current relief bill to ensure continuity of unemployment aid to millions of Americans as long as the coronavirus pandemic continues to stifle economic recovery.

Even if Democrats include automatic triggers, they cannot be permanent if they are passed using reconciliation. Under the Byrd Rule, “reconciliation cannot increase the deficit in any year outside the window in which it is written, which in recent tradition is 1o years,” Moller told me. Therefore, Biden couldn’t pass an automatic stabilizer program in perpetuity, but rather would have to limit the program to less than 1o years, similar to what Republicans did in 2017 when they passed the Tax Cuts and Jobs Act. One sincerely hopes that the coronavirus pandemic will be behind us by 2031.

Unemployment Insurance Is As Crucial, If Not More, Than Stimulus Checks

While $1,400 stimulus checks have gotten the majority of public attention, the fact remains that unemployment benefits have provided far more relief to millions of Americans. This appears lost on many, including progressives like Representative Rashida Tlaib (D-Michigan), who recently tweeted “$1800 in total direct relief. That’s $163 a month. . . we are supposed to represent people in need, not corporate greed. Time to get our priorities straight. $2000 recurring survival checks now.” To focus only on stimulus checks as direct relief and not consider unemployment aid is myopic at best.

In fact, 40 million workers received some unemployment insurance benefits in 2020 with the average beneficiary receiving $14,500 in benefits, according to Elizabeth Pancotti, a policy advisor at Employ America; much more than $1,800. Moreover, for those who were out of work since mid-March of last year, the average benefits were $26,500 in 2020. In other words, unemployment benefits make up a much greater proportion of total relief for most Americans than the much more popular stimulus checks. Members of Congress should not lose sight of that when finalizing the next stimulus package.

Automatic stabilizers are a crucial tool to ensuring that unemployment benefits don’t abruptly end for millions of Americans. It behooves Democrats to include them given their plan to use reconciliation to pass the American Rescue Plan. Otherwise, August and September forebode Groundhog Day in unemployment benefit negotiations.

Meet RapidSOS, The Startup Hoping To Modernize The U.K.’s 999 Service