Breaking
Meet Onesimus, The Enslaved Man Who Saved Boston...
How to Build a Sales Forecast Model
The Unexpected Ways COVID-19 Has Forever Changed What...
Google Posts: Conversion Factor — Not Ranking Factor
How To Bring Your Branding To Life
Coinbase Cofounders And Investors Poised To Rake In...
How To Stay Top-of-Mind For Your Audience With...
Employers: Eight Red Flags You May Not Notice...
The benefits of videoing in the automotive industry
Ted Lasso, Other Apple TV+ Shows Arriving Soon...
How To Incorporate Click And Collect Into Your...
What Are Working Capital Loans and When Should...
The 10 Biggest Trends in Entrepreneurship to Look...
Clubhouse Has Grown 10X In Two Months. Here’s...
Here’s Why Tyson Foods Stock Looks Undervalued At...
How To Maintain Client Relationships During Long Projects
Home Technology ‘Fortnite’ Astronaut Challenge: How To Find The Ancient Ship And Install Its Missing Parts
Technology 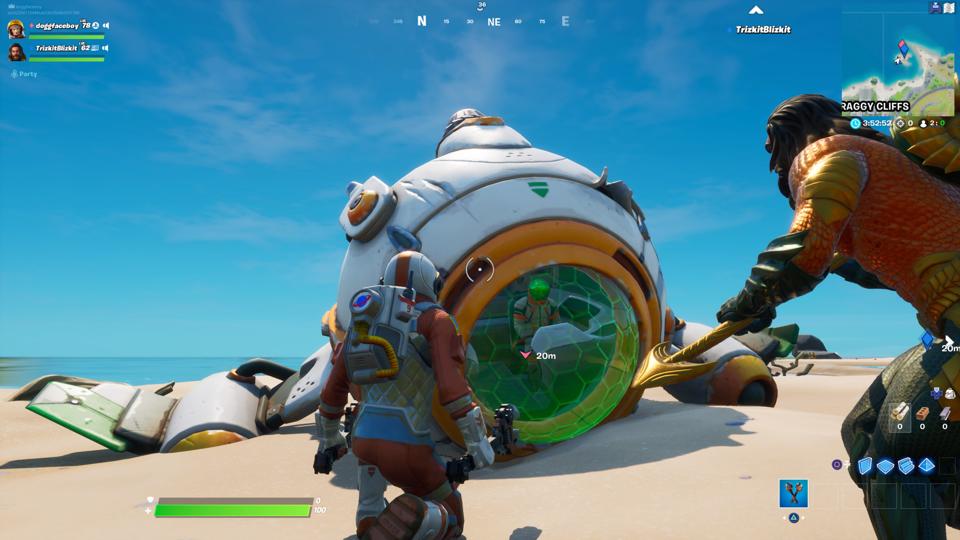 A new secret Astronaut challenge has crash-landed in ‘Fortnite’ today. Here’s how to solve it.

The water levels from the Season 2 flood fell once again, revealing not only the new Coral Castle (Atlantis) Named Location, but a mysterious ancient spaceship on a small patch of sand north of Craggy Cliffs.

The ship is referred to in-game as the Ancient Ship, and inside you’ll notice its alien passenger. It seems obvious that Fortnite is picking up the threads of an old storyline—one about Travelers and Rockets and Rifts, oh my.

In any case, finding this spaceship will activate a new challenge with a number of steps that are all very easy to complete. Here are the steps:

Finding the ancient ship kicks off the rest of these challenges. Then you’ll need to find the three missing parts—a Heat Shield, Thruster and Battery Pack—install them on the broken-down ship and set its launch sequence.

Once you do, the ship will rise into the air and a timer will appear above it like so: 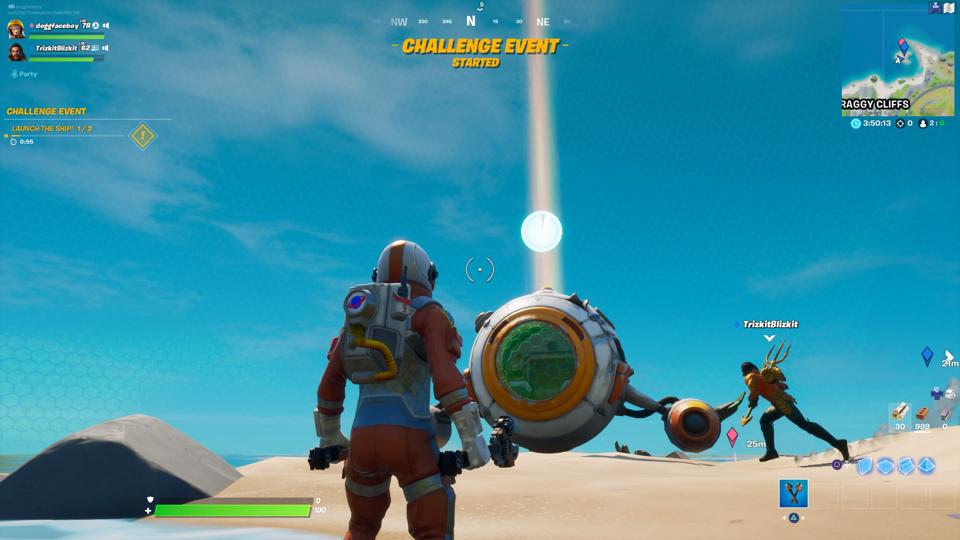 The ship begins its launch sequence.

Once that timer goes all the way down the ship launches, though when I experienced this it didn’t so much launch as suddenly shoot me through a rift into the sky. The ship was simply gone. Rifts lined the little island around us, which you could jump through to propel yourself into the air.

In any case, here are the locations of the three missing parts: 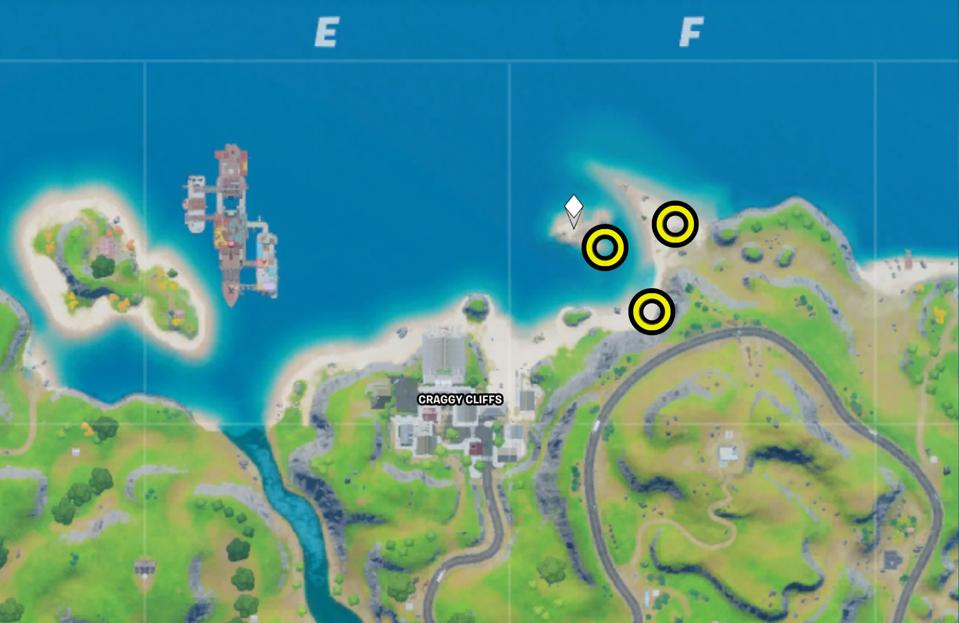 The ship itself is on the island where the little white marker is. The three missing parts are spread out in close proximity.

The Battery Pack is just east of the ship in the water by some rocks which I broke but I’m not sure you have to break: 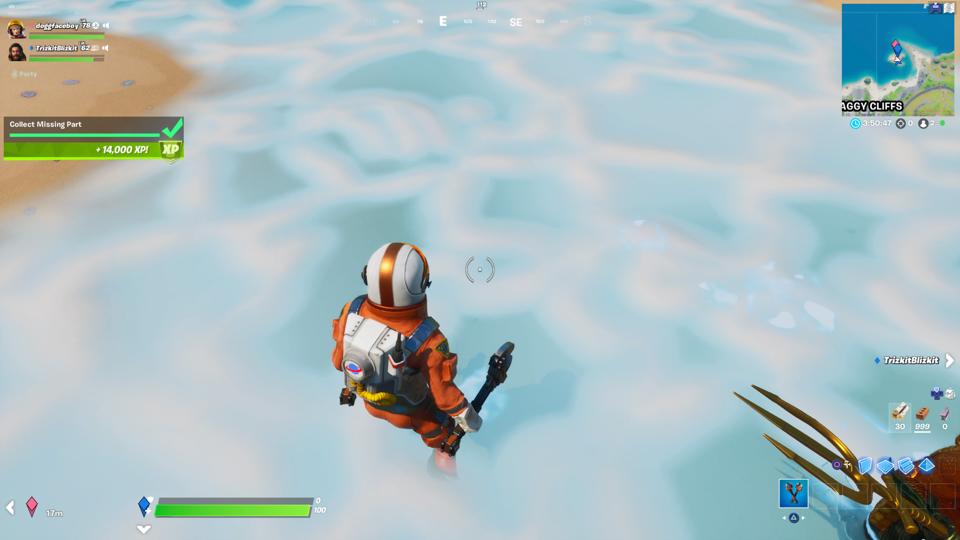 The Battery Pack is installed on the right/top-side of the ship.

The Thruster is across the bay on the side of a cliff: 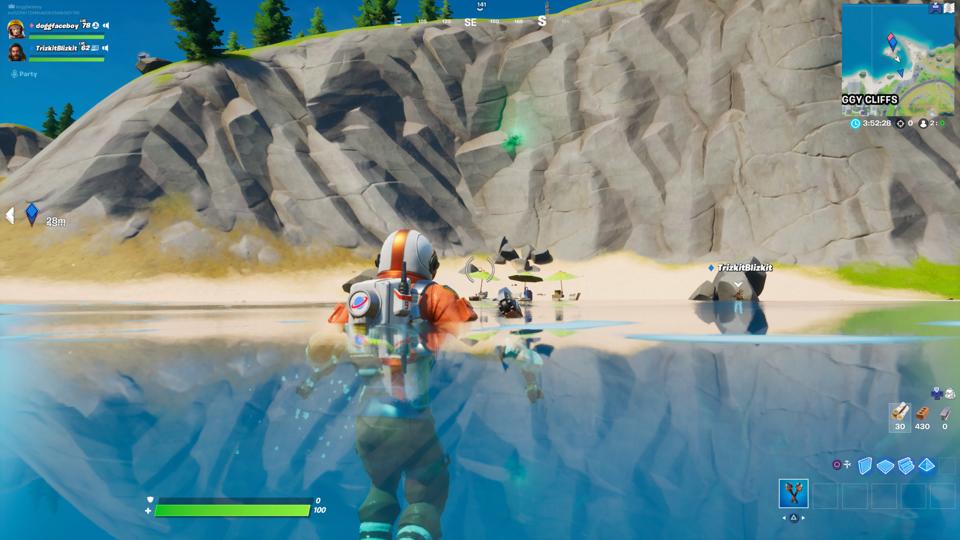 This is the hardest to reach missing part but the easiest to spot, as it’s seen glowing from a distance. Just build up to it to retrieve the part and then head back to the Ancient Ship to install it in one of the ship’s wings.

The Heat Shield can be found in the sandy peninsula at the end of the cliffs where you found the Thruster. It’s also by/beneath some rocks which I broke. Like the Battery Pack you’ll likely hear this part humming before you spot it. 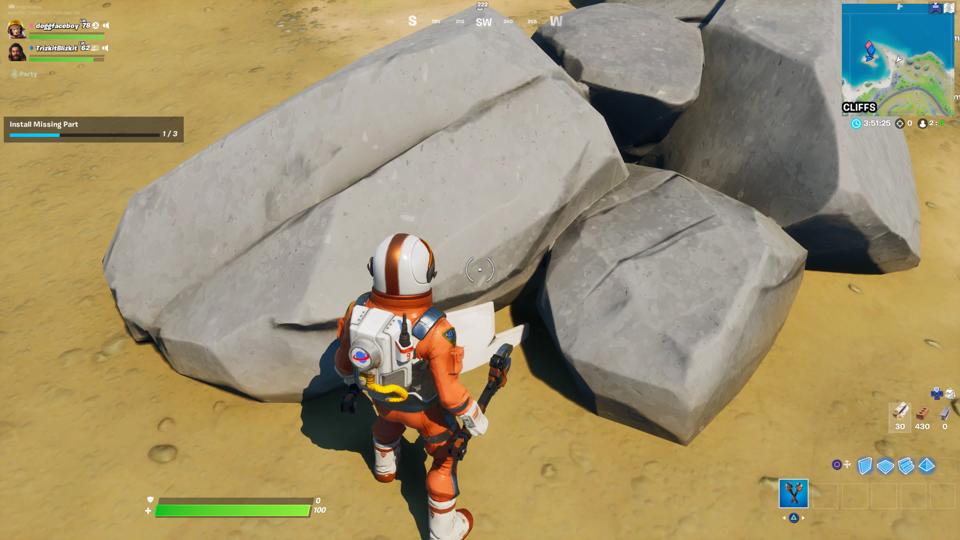 You’ll install this bad boy right next to where you installed the Battery Pack. Once you’re done with all three you’ll be prompted to launch the ship. Do so and the whole challenge event will begin and once that’s all over and done with you get 25,000XP and a sense of accomplishment.

Two important notes on this challenge: First and foremost, you can complete it in the Battle Lab, making it way easier than if you had to contend with enemy players, though I’m not sure how hot this area will be given that this is a secret challenge.

Second, I was surprised to learn that this challenge is completed as a team. So you and your squad can quickly grab up and install these parts without each of you having to find each one. This makes it even quicker and easier.

And that’s that, folks. Here’s a video of my son and I completing the challenge within Battle Lab. I think I picked the perfect skin for the occasion.

Best of luck out there, young padawans!