Breaking
Silver Shines, Says Citi, Tipping A 60% Price...
Report: Lawyers Unable To Locate Parents Of 545...
In Need Of A Competitive Edge? Look To...
Think Small: Timely Picks To Capture The Reawakening...
Patient Gets Covid-19 Swab Lodged In Her Lung...
Nine Signs You’re Not Being Effective During Your...
Chromebooks Can Now Run Windows 10 – Find...
Will Biden’s Tax/Benefit Plans Help/Hurt You And The...
This Fashion Brand Turned A Stripe Into A...
On CRM: Salesforce Has Finally Fixed Your CRM...
Shots In The Dark: Why Access To A...
The Case For A Better ROI From Virtual...
What Building Wealth Really Takes In Business
Building A Circular Economy In New York City...
How To Cast Your Vote Against Election Scams
Does Business Investment Follow Data or Gut Feel?
Home Technology Fosun, A China Investment Heavyweight, Elevates Drug Exec In Shake-Up As Coronavirus Hits
Technology 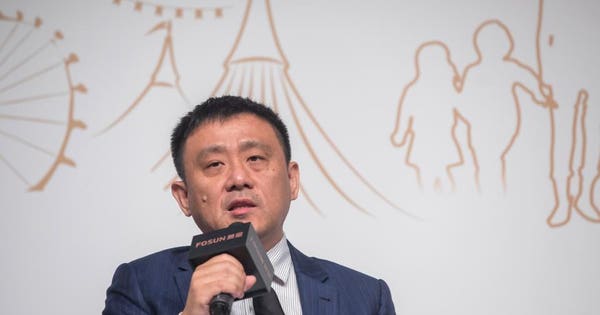 Chen Qiyu has been promoted co-CEO of Fosun International as part of a leadership shake-up.… [+] Photographer: Paul Yeung/Bloomberg

Fosun International, one China’s largest private-sector investment and pharmaceutical concerns, has elevated a top pharmaceutical executive as co-CEO as the coronavirus outbreak damages the world’s No. 2 economy, cripples global supply chains, and threatens to wreak even more havoc on business globally.

In addition to its expansion in pharmaceuticals and healthcare, Fosun International has been one of China’s most active international investors in the past decade, with ties to Thomas Cook, Cirque du Soleil and Club Med, among many others.

Hong Kong-listed Fosun International’s shares have lost about 14% of their value in the past year; its market capitalization was HK$89 billion, or $11 billion, on Friday. Shanghai Fosun Pharmaceutical, whose shares trade in Shanghai and Hong Kong, was worth about 64 billion yuan, or $9 billion, on Friday.

Guo Guangchang, co-chairman and co-founder of Fosun International, is one of China’s richest men… [+] with a fortune worth $6.2 billion on the Forbes Real-Time Billionaires List. Photographer: Paul Yeung/Bloomberg