Breaking
Parrot Plumage Color May Be Linked To Body...
Recent Precious Metals Dip A Buying Opportunity
Looking For Venture Capital? Here’s How One 50+...
Growing Your Retirement Money Using 401(k) Dollar-Cost Averaging
Wellness Exec Abby Miller Levy Partners With Venture...
Microsoft Teams Issues Strike To Zoom With Tidal...
What’s Coming For The S&P 500 In October
4 Ways You Can Showcase Empathy With Your...
A $22,000 Microsoft Surface Will Soon Be For...
Zooming In – Should SMEs Invest In The...
iOS 14: The Surprising Security Risk Of Sharing...
How A Break From Lord Sugar Changed The...
Sunday’s Google Doodle Is Actually About Google
Office Of The Comptroller Of The Currency Chief...
Source Code For Multiple Windows Operating Systems Publicly...
Why Forgettable Pfizer Really Is A Great Value...
Home Technology Four NHL Players Kneel During The U.S. And Canadian National Anthems
Technology

National Hockey League players Ryan Reaves and Robin Lehner of the Vegas Golden Knights knelt alongside Jason Dickinson and Tyler Seguin of the Dallas Stars during the singing of the U.S. and Canadian national anthems prior to their game on Monday, following the lead of Minnesota Wild’s Matt Dumba, who became the first NHL player to kneel on Saturday. 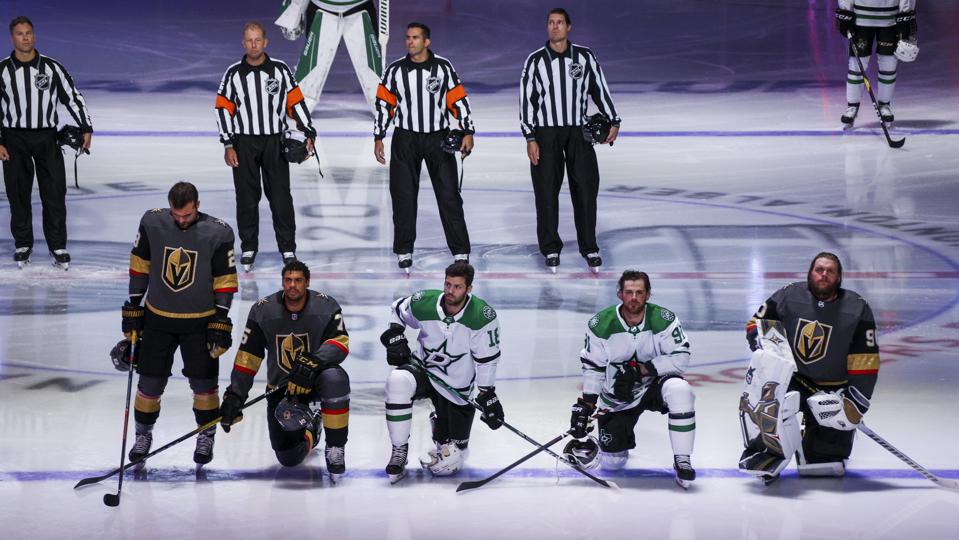 EDMONTON, ALBERTA – AUGUST 03: Ryan Reaves #75 and Robin Lehner #90 of the Vegas Golden Knights … [+] kneel during the singing of the American national anthem alongside Jason Dickinson #18 and Tyler Seguin #91 of the Dallas Stars before the start of the Round Robin game during the 2020 NHL Stanley Cup Playoff at Rogers Place on August 03, 2020 in Edmonton, Alberta. (Photo by Dave Sandford/NHLI via Getty Images)

As the NHL returned to play following worldwide protests against systemic racism after the May 25 death of 46-year-old George Floyd, fans and even some of its players criticized the league’s tepid support of the Black Lives Matter movement, including the reluctance to kneel during the anthems.

On August 1, as the NHL officially began its postseason reset, Dumba gave a speech against racism in hockey and globally prior to a game between the Chicago Blackhawks and Edmonton Oilers, subsequently kneeling for the U.S. anthem.

“I know first-hand, as a minority playing the great game of hockey, the unexplainable and difficult challenges that come with it,” Dumba said. “Black Lives Matter. Breonna Taylor’s life matters. Hockey is a great game, but it could be a whole lot greater, and it starts with all of us.”

Forward Nazem Kadri of the Colorado Avalanche shared his thoughts last week, saying during an interview, “From a league standpoint, I think we’d like to see a little more acknowledgement, and to have [the NHL] address the situation and to know that they stand with their players.”

The hashtag “#Kneel4Hockey” began trending on Friday, as fans shared pictures of themselves kneeling in support of Black Lives Matter and urging their favorite teams and players to do the same.

The NHL players join professional athletes in other leagues holding games right now including the NBA and MLB to kneel for the anthem to protest systemic racism and police violence, a practice started by former San Francisco 49ers quarterback Colin Kaepernick.

Kneeling for the anthem has become more widespread and further scrutinized politically amid the ongoing protests. Republican Oklahoma State Rep. Sean Roberts last week threatened to “reexamine” a tax benefit for the NBA’s Oklahoma City Thunder if they chose to kneel for the anthem. The players ignored the threat on Saturday when every player decided to kneel.

Hailing from Regina, Saskatchewan, Dumba knelt for the U.S. anthem but not the Canadian anthem. Afterwards, he said, “To be honest, I kind of froze up,” and that it was “my biggest regret.” “There is a lot of light that needs to be shed on what is happening in Canada and the oppression First Nations people have felt for hundreds of years. I was disappointed looking back on it because, like I said, I knew the reasons why I knelt. Just in the moment, it happened like that.” He’s now raising his fist during the U.S. and Canadian national anthems.

After the NBA’s Toronto Raptors arrived at the league’s Orlando-based “bubble” in a bus emblazoned with “Black Lives Matter” last month, Golden State Warriors forward Draymond Green asked the team’s president about the decision, saying, “As a Canadian, it doesn’t directly impact your team.” The Raptors’ Chris Boucher, a Black Canadian player, responded on Twitter saying, “Aren’t we all fighting for the same thing…I respect you but we go through our battles too.”