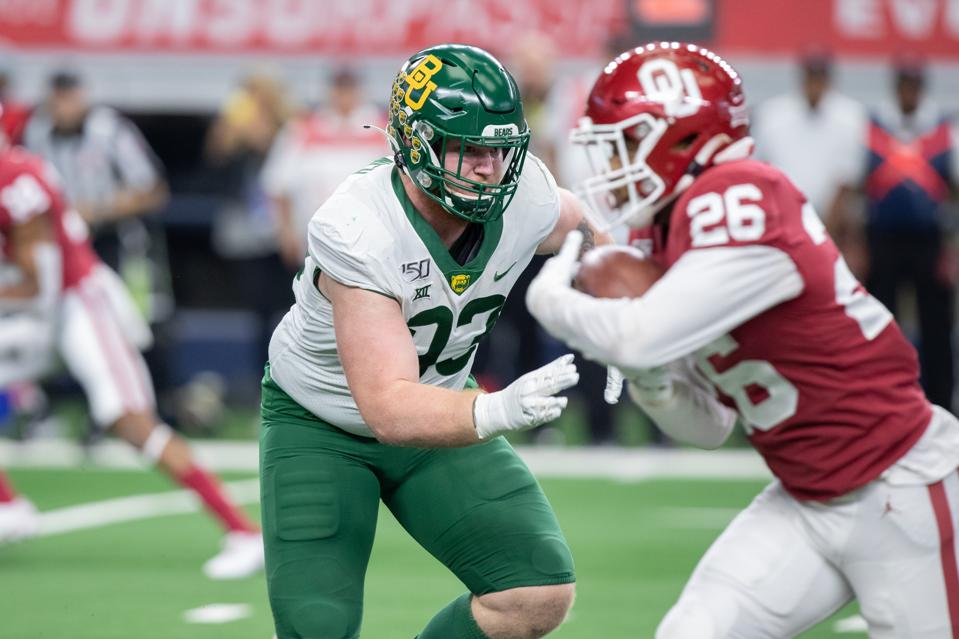 James Lynch has the power and versatility to give the Vikings an upgrade on the defensive line. … [+] (Photo by Matthew Visinsky/Icon Sportswire via Getty Images).

The losses in free agency combined with the way the Vikings finished the season against top competition left general manager Rick Spielman on a mission as the 2020 NFL Draft approached.

He armed himself with a slew of draft picks – 15 in total – with the idea that he could create a competitive atmosphere in training camp that will carry over to the regular season. COVID-19 is likely to play havoc on the way the Vikings and all teams prepare for the upcoming season, but the new players on the team must stand up and make an impact once they get their opportunity.

Big things are expected from early-round picks like Justin Jefferson, Jeff Gladney, Ezra Cleveland and Cameron Dantzler, but that’s not enough. Spielman made 11 picks in Rounds 4 through 7, and several of those selections appear to have the ability to make a solid contribution in 2020.

If the Vikings are going to be a team that has a chance to win the NFC North and go a long way in the postseason, several unheralded rookies are going to have to step up.

The Vikings used their first fourth-round selection to take Wonnum, and he has the size and length to come around the corner at 6-5 and 258 pounds to cause havoc for opposing offensive tackles. He finished the season with 37 tackles, 9.5 tackles for loss and 4.5 sacks.

One of the reasons that Wonnum appealed to the Vikings is that he stepped up against the better opponents. He was a dynamic performer when the Gamecocks faced Georgia, and he had six tackles while facing two first-round picks in left tackle Andrew Thomas (No. 4 to the Giants) and Isaiah Wilson (No. 29 to the Titans). South Carolina came away with the 20-17 upset in that game, and Wonnum played a big role.

Lynch appears to be one of the best later-round picks in this year’s draft because of his versatility on the defensive line. He can play a powerful role in clogging up the middle, and he can also line up on the outside and use his power to crush the blocker and get to the quarterback.

Lynch did not have impressive speed numbers, but his play on the field opened eyes throughout the scouting world. He has a relentless quality to his play, and that will appeal to an old-school head coach like Mike Zimmer.

The numbers were shockingly good as he had 19.5 tackles for loss, 13.5 sacks, five passes deflected and three forced fumbles. Lynch knows that impressive college stats are nice, but significant improvement is needed to become a consistent contributor in the NFL.

It’s clear that the Vikings struggled at the cornerback position in 2019 and they clearly had a difficult time slowing down receivers who graded out at B-minus or better. That’s not good enough to win in the NFL, and it’s one of the main reasons that Spielman drafted three cornerbacks with his first eight selections.

Hand showed off impressive athletic skills at the NFL Scouting Combine in Indianapolis, and his game tape revealed that he plays a physical style and knows how to deliver a big hit. While that does not always translate into great coverage skills, Hand brings belief in himself and the work ethic to get better on an every-day basis.

Since the team suffered so much at this position last year, it seems certain that Hand will get an opportunity to show what he can do and win vital playing time.

Those who watched Big Ten football for the last three seasons had to be somewhat shocked that Willekes was still around when the Vikings selected him with their first of four picks in the seventh round (225th overall).

Willekes does not bring elite size or strength to the field. He checks in at 6-3 and 264 pounds, and there is always a chance that he is going to get engulfed by bigger and stronger offensive tackles. However, do not think for a minute that Willekes is going to fall short when it comes to his battle level.

He faced bigger and stronger men during his college career with the Spartans, and he had 20.5 tackles for loss  and 8.0 sacks in 2018, and he followed that up with 15.5 TFL and 10 sacks last year. Willekes plays with an ornery attitude and once he finds some early success in a game, he is tough to slow down.

The Vikings need to find defensive line depth in 2020, and there’s a chance that this seventh-round selection may be able to help in this area.

Warning For The US: Diabetes And Coronavirus Cocktail Killing Young People In Mexico

Proposal: Next $4,000 Stimulus Check Might Be A Tax Credit For Skills Training

The Next Revolution In Personal Finance: The Financial...