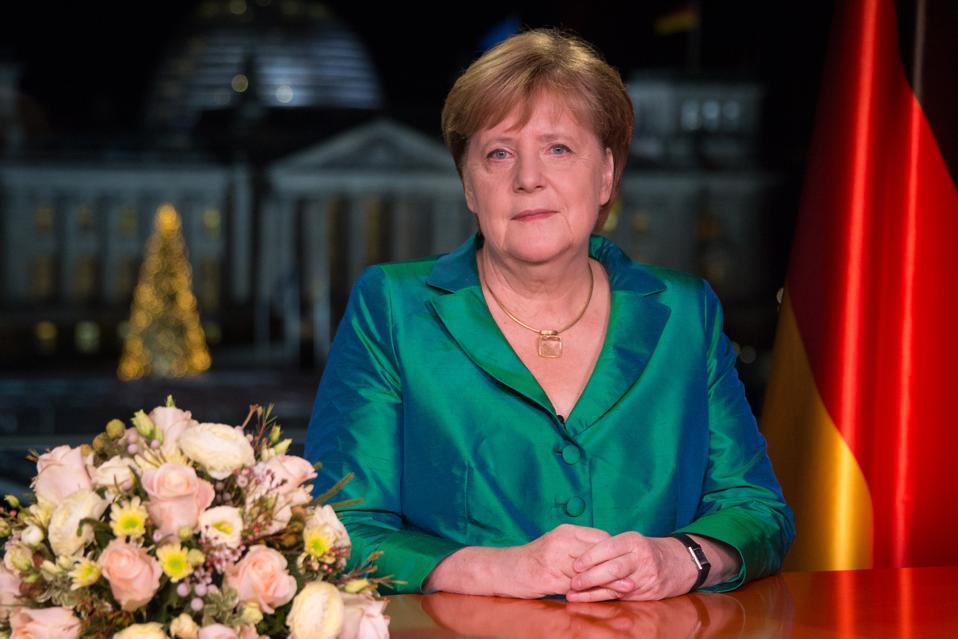 German Chancellor Angela Merkel said in her new years address that Germany must do “everything … [+] humanly possible” to deal with climate change.

The leaders of France and Germany have had a lot to say lately about the importance of European Union efforts to fight climate change. But when it comes to their own countries action plans, it would seem they are approaching the matter with less urgency.

According to the European Commission, only 18 of the 28 EU countries have submitted final national energy and climate plans, which detail how they will meet 2030 emission reduction targets, by the January 1st deadline. Among the laggards are the EU’s largest countries: Germany, France, Spain, and the UK. Poland, the most reticent EU country when it comes to climate action, did submit its plans on time.

The Commission can launch legal infringement procedures against the countries that have not met the deadline, which could involve hefty fines. A Commission source indicated however that the EU executive will take a softer approach, encouraging the countries to file as quickly as possible.

In the case of Britain, it is perhaps not surprising a plan wasn’t submitted given the country is nominally leaving the EU in one week. But the deadline was still legally binding for the UK as well. EU law will continue to apply in the UK during a Brexit transition period that will last at least until the end of this year, and possibly for much longer.

The German government says it couldn’t meet the deadline because the country just adopted a new climate protection law last month, and there wasn’t time to adjust the plan accordingly.

Draft plans submitted by all EU countries last year already indicated that the national plans will not be enough to allow the EU to reach its 2030 targets. The Commission published an assessment in June of last year, based on the draft, recommending changes needed in the final versions.

Though the draft plans would get the EU to its 40% emissions reduction goal, they would not allow it to reach accompanying goals of increasing energy efficiency by 32.5% and increasing the share of renewables to 32%. The energy efficiency measures in particular would leave a large 6.2 percentage point gap from meeting the target.

The fact that the draft plans would meet the 40% emissions target for 2030 is cold comfort since that goal is now considered outdated. The new Commission administration of President Ursula von der Leyen wants to raise this target to 50% or 55% by 2030, something the draft national plans are incapable of reaching.

The increase in ambition since 2014 may mean that some countries are not taking their national plan requirements seriously, waiting instead for the new targets for 2030 and 2050 to become clear. But the Commission and members of the European Parliament have warned that national governments have a legal obligation to at least be on track to meet the current requirements, and they can strengthen their policies later to match any changes.

The other countries that have failed to meet the January 1st deadline are Bulgaria, Romania, Latvia, Luxembourg, Slovenia and Ireland.

For The Browns, Tight End Is A Position To Watch

The Return Of Bob Knight To Indiana Basketball...

The Cleveland Indians Must Begin To Prepare For...