Breaking
ESBC Major Updates: Tons Of Heavyweight Greats Added...
5 On-Demand Courses To Help Develop Your Leadership...
How to Run Nonprofit Marketing Ads
Entrepreneurs Are Bringing Transparency To Home Buying And...
Best Incentive To Get Vaccinated: Money, Messaging, Or...
Page Level Query Analysis at Scale with Google...
How A CIO Can Align IT With Business...
Blogger of the Month: Jo, Girl Eats World
6 Things Women In Business Know That Men...
How to Use First-Party Data for Ad Personalization
Pressing Reset—Putting A Fallen Unicorn Back On Its...
How We Went Viral: Promoting Content with Influencers,...
Blame Olympic Record Price Tag For Return To...
Apple iOS 14.5 Release: Should You Upgrade?
How to Come up with Podcast Topics and...
Why Gaming Gear Company Razer Launched A $50...
Home Technology Fully’s Jarvis Answers The Standing Desk Question
Technology 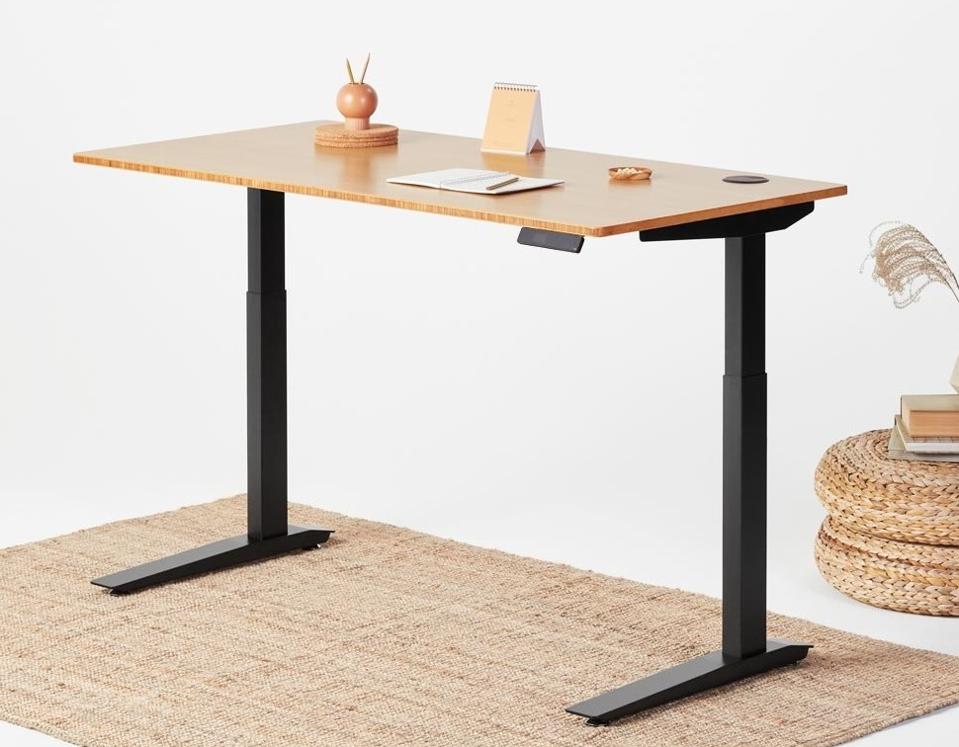 Blood. The flow of which is something most of us are concerned about, as it pertains to keeping our bodies functioning and generally healthy. This is why there is a market for standing desks, in this case the Jarvis standing desk from Fully. One of many brands of standing desks on the market, it stands out because the brand itself stands out and for that, it enables us to stand up, ergonomically speaking.

Fully designs some interesting furniture that promotes ergonomics, movement and keeping that blood flowing throughout your body in order to fight stagnation and at least maintaining a sense of overall well-being while being forced to sit and do a job. So the question is — how do you design a standing desk that also considers ergonomical functionality?

Thankfully for Fully, the answer is simple. Make it a standing desk. Which is exactly what the Jarvis is. It’s not complicated. With either OLED touch controls or a simple toggle, the Jarvis goes up or down. If you are sitting, drop it to a height that keeps your elbows at a 90 degree angle. If you are standing, bring it up so your eyes are level with the center of your monitor and your mouse hand is square.

I’ve been using a standing desk for a bit over two years. I start the day standing for about two hours (I also use an anti-fatigue mat to engage my feet while standing) then after breakfast and glaring hopefully at the rowing machine, I sit until about three, when that daily restlessness sets in. Then it’s time to raise the desk back up and pace around the home office until it’s time to go play video games.

Since the Jarvis is my second standing desk (a review unit was provided by the manufacturer, after some hesitation on my part) I’m using it as an art table. In the art room. Formerly known as the dining nook. I took a picture. 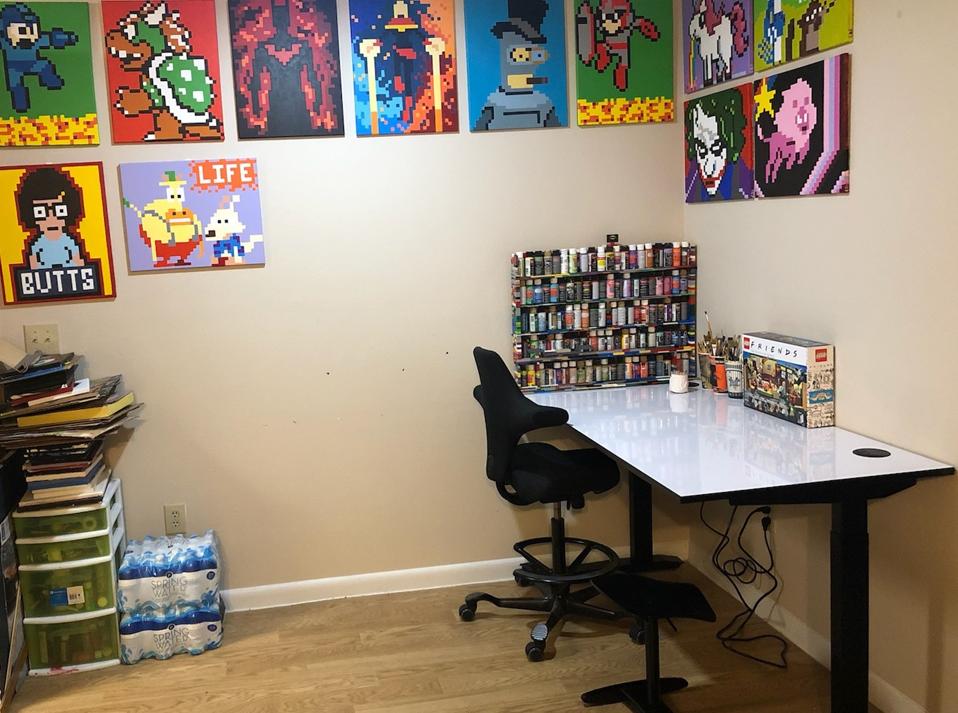 All art copyright Curtis Silver (and yes, that paint tower is made of LEGO)

As you can see, I went with the whiteboard option. The re-designed Jarvis is also being pushed in a slick bamboo finish as well. This doesn’t affect the construction of the Jarvis, which is solid. While you do have to assemble yourself, if you can screw in screws, then you should have no problem.

This is not a light desk. The desk top itself is ~50lbs. The supports come in narrow or wide options and have a 350lb lifting capacity. The general height goes from 29-inches to 48.25-inches (without the top). The starting price of most of the desks is $439 (though some appear to be on sale for $389), which is a solid price for an automatic standing desk. The Jarvis comes with numerous power options, including a hub that fits in one of the (optional) grommets. These are facts.

While not normally a consideration when buying anything, if you watched that episode of Broken on Netflix about plastic, the additional fact that Fully has eliminated all EPE foam from its packaging might be appealing. The desk top comes in one box, the frame in two separate boxes. The packing is light, but sturdy for the most part. This didn’t stop FedEx from doing its part in damaging the first desk top I received.

Fully, to its credit, was very helpful and accommodating in getting me a replacement desk top (the box has some stress points that create gaps in the packaging materials, so when clearly dropped off a truck on the corner, damage is possible). Fully is working on making this packaging more secure while remaining environmentally sustainable.

This is the exception, not the norm as the desk top was shipped to me during the holiday season and was surely subject to rushing and general carelessness.

One feature in the Jarvis that does not exist in my previous standing desk is the ability to set the max height. This way, considering its positioning, I never raise it high enough to knock my paintings off the wall. To this point, I’ve no complaints about the sturdiness or construction of the desk itself.

My teenager sits or stands while she eats at the Jarvis. I do art on it. My teenager sits across from me and criticizes my art while she Snapchats her friends. The Jarvis does what it’s supposed to do. It keeps us moving because we don’t have to just sit still at a fixed height. As I age out of using Millennial slang, that’s important to my personal health.

“There is so much power in movement. When we can move our bodies as we work, we feel more energized, engaged, and connected to what we’re trying to accomplish. We work better with others. We have more of ourselves to give at the end of the day.” says David Kahl, Fully’s founder and CEO via email. “It’s why we design furniture that empowers all kinds of movement, and why you won’t hear us debate the merits of standing vs. sitting. What we really want is for people to feel the freedom to lean, stretch, sway, balance, rock, and dance, and know their furniture will support them along the way. We recognize furniture should never be one-size-fits-all, and we design pieces that can adjust and adapt to the changing needs of an individual as they make their way through the day.”

The Jarvis has been constructed with increased stability, side-to-side and front-to-back. The foot-to-leg connection is strong. When flipping the desk during construction, I realized my time of being able to lift something that technically requires two people would be coming to an end someday. So staying as far away from a sedentary lifestyle is of growing and constant importance.

The Jarvis is a sturdy desk. It’s not something you can easily rock or tip. At its price point, the Jarvis is one of the more affordable automatic standing desks on the market, but that’s not the entire selling point of the desk. The company is. Fully has an entire line of furniture and accessories to inspire movement and kinetic energy while you work.

This kinetic energy is the true selling point of the Jarvis. Using standing desks and kinetic furniture has changed how I literally move through my otherwise mundane life.

Even though it’s a rectangle on legs, I get that feeling of movement from the Jarvis. It feels like a rectangle that wants to go higher or lower, that wants you to stand and move around. Get an anti-fatigue mat (they are cheap on Amazon). Get some monitor arms and a chair that keeps you moving (both are things that Fully offers upon desk customization and checkout). Your blood flow will thank you for it.