Breaking
Microsoft Teams Issues Strike To Zoom With Tidal...
What’s Coming For The S&P 500 In October
4 Ways You Can Showcase Empathy With Your...
A $22,000 Microsoft Surface Will Soon Be For...
Zooming In – Should SMEs Invest In The...
iOS 14: The Surprising Security Risk Of Sharing...
How A Break From Lord Sugar Changed The...
Sunday’s Google Doodle Is Actually About Google
Office Of The Comptroller Of The Currency Chief...
Source Code For Multiple Windows Operating Systems Publicly...
Why Forgettable Pfizer Really Is A Great Value...
Hot For The Holidays? Amazon Home Drone, Kid...
Best Small Business Loans
The FAAMG Stocks Drive The Markets
Channel Arbitrage And Other Ways Fintech Is Disrupting...
Mall Of America Extends A Hand Of Unity...
Home Business GAME TO REMEMBER: Green Bay Packers 48, Washington Redskins 47
Business 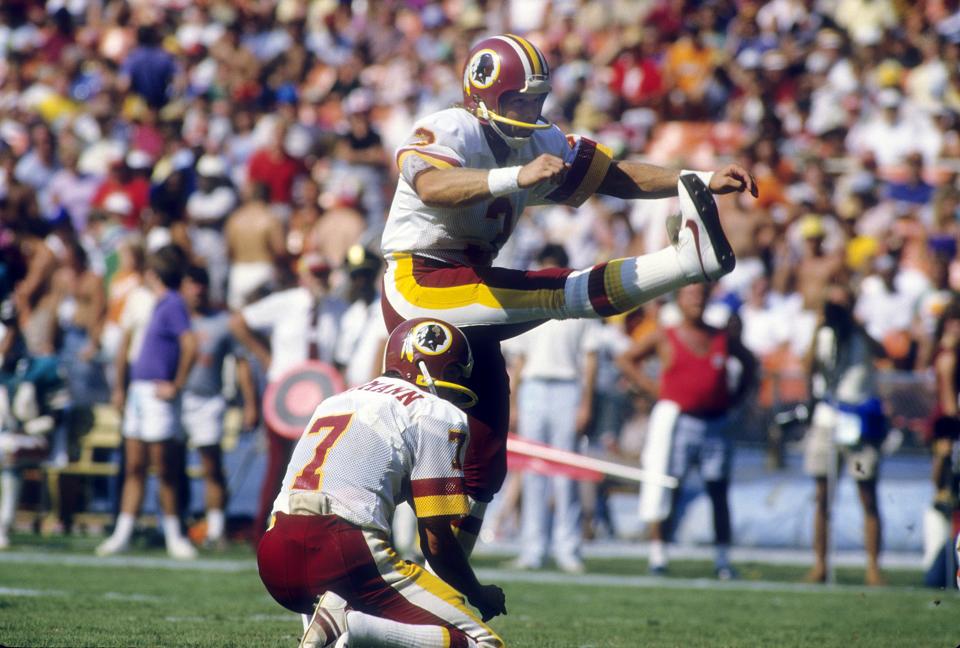 (Note: During the NFL’s 100thyear anniversary, I’ve looked back at some of the greatest games in Green Bay Packers’ history. In anticipation of Sunday’s Green Bay-Washington matchup, I look back to Oct. 17, 1983, when the Packers defeated the Redskins, 48-47, on Monday Night Football).

In 1983, Mark Moseley was the NFL’s version of death and taxes. In a world of unknowns, Moseley — the Washington Redskins kicker — was Mr. Predictable.

And that appeared to be terrible news for the Green Bay Packers.

In 1982, Moseley made 20-of-21 field goals and became just the second kicker in NFL history to win the league’s MVP award. Moseley was enjoying another stellar season in 1983, when he appeared ready to become a hero once more.

Moseley’s Redskins trailed the Packers, 48-47, with three seconds left in a Monday Night Football game that had already become an instant classic. With Moseley preparing for a 39-yard attempt, it appeared Green Bay’s hopes of defeating the defending Super Bowl champions were about to end.

“I walked over to (kicker) Jan Stenerud and I said, ‘Do you believe this?’ ” Packers quarterback Lynn Dickey said. “We’re going to lose this game. What a shame.”

Moseley, who had made 82% of his career kicks from inside the 40-yard line and 84.2% of his attempts in 1983, missed this one as time expired. And amazingly, the Packers and their sellout crowd celebrated a game that’s still talked about in Green Bay 36 years later.

“We kind of rushed it,” Moseley said afterwards. “Maybe we should have taken more time. I just missed the kick.”

That was one of the few times all night either offense malfunctioned.

The two teams combined for 1,025 yards of total offense, 552 from the Redskins and 473 from Green Bay. Washington quarterback Joe Theismann threw for 398 yards and two touchdowns, while Dickey matched him with 387 yards and three touchdowns.

The game featured five lead changes and each team punted just once all night. It was also the highest-scoring contest in the history of Monday Night Football until 2018, when the Los Angeles Rams defeated Kansas City, 54-51.

“Listening to people talk about that game today, you’d think about 250,000 people were there that night,” Dickey said. “Almost everyone I talk to tells me they were there.”

Washington, which went 14-2 that season and reached a second straight Super Bowl, entered as a five-point favorite. The Packers, on the other hand, were a mediocre team that would finish the year 8-8 in what would be Bart Starr’s ninth and final season as head coach.

Before the game, the mild-mannered Starr gathered his team, turned out the lights and turned on an overhead projector. Up came a quote from Redskins tight end Don Warren that read, “The game is going to be a rout.”

“Bart showed us all the quote again,” Dickey said. “But then he said something new. He said, ‘Warren thinks it’s going to be rout, but he never said which way. Now let’s go kick some ass!’ Now that was cool! Bart just never said stuff like that. I’ll never forget that.”

This game was unforgettable on many levels.

Packers tight end Paul Coffman, who caught six passes for 124 yards that night, had two first half touchdowns as Green Bay raced to a 24-20 lead at intermission.

“I remember getting home after that game and friends of mine from around the league had left messages like, ‘You’re going back to the Pro Bowl,’ ” Coffman recalled. “That was a great game.”

The second half was a see-saw affair, and Washington took a 47-45 lead after Theismann threw a 5-yard TD pass to running back Joe Washington. Back came the Packers, though, marching 56 yards to set up Stenerud for a 20-yard field goal with just 54 seconds left that gave Green Bay a 48-47 lead.

“Dexter had kind of spouted off in the papers before that game that he was going to wreak havoc,” Packers left tackle Karl Swanke said. “Well, there were no disruptions with Lynn.

“And that night was a culmination for Bob Schnelker and our offense. Everything he called worked to perfection. It was an incredible night.”

One that was almost ruined when Theismann drove his team deep into Green Bay territory in the closing seconds. Shockingly, though, Moseley failed to deliver for one of the few times in his terrific 17-year career.

“You almost get dizzy watching a game like that,” said Redskins running back John Riggins, who had two TDs in the game. “You eat the bear and sometimes the bear eats you.”

On this memorable night, the Packers got the last bite.