Breaking
What To Look For In A Nursing Home...
Apple’s Radical iPhone 12 Upgrade Suddenly Confirmed
5 TikTok Growth Hacks You Need To Know
Zynga Stock Looks Attractive At $9
How Russian Thieves Use Dark Web To Get...
France Off Travel Corridors And FCO Exempt List
Ask Ethan: Why Are The Moon And Sun...
When To See The Moon And The Planets...
IRS-CI Involved In Largest-Ever Seizure Of Terrorist Organizations’...
The Check Really Is In The Mail. After...
Epic Games Vs Apple: Why You Won’t Be...
Senator Kamala Harris Proposed A Bold Tax Credit...
Deal Terms To Reduce The Risk When Buying...
Multiple Sclerosis Drug Shows Promise For HIV Prevention...
The Neglected Piece Of Retirement Planning
It’s No Longer A Viable Option For Capitalism...
Home Business Gaming Industry Continues Big Growth Due To Stay At Home Americans
Business 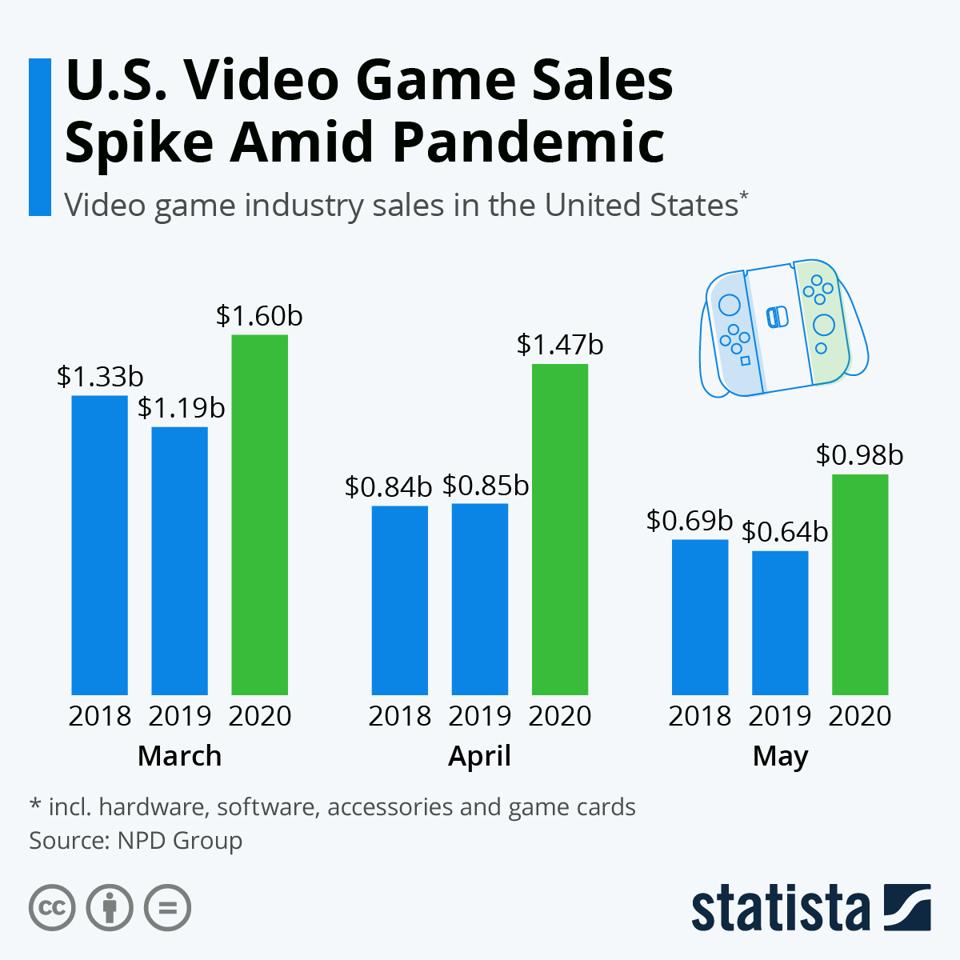 As soon as people were ordered to stay home in response to the Covid-19 pandemic, consumers have had a number of ways to spend their added time at home – including play games. As the above chart shows, the increases in gaming revenue has been huge, month to month, since March. In March of this year, gaming, over March of 2019 is up 34% in spending. In April of this year, gaming was up 73% over last year, same month! And this past month, May, was up 53% over May of 2019.

“Video game engagement and revenue across all platforms, including console, PC, mobile, and VR, grew globally during the Covid-19 lockdown. Video gaming is considered an affordable and accessible form of entertainment, and existing and new gamers across all demographic groups found emotional and social support in these virtual worlds. The digital transition that began a decade ago through digital downloads, games-as-services, and mobile app stores has paid off for the industry,” said Michael Cai, President of Interpret, a global video game insights agency. 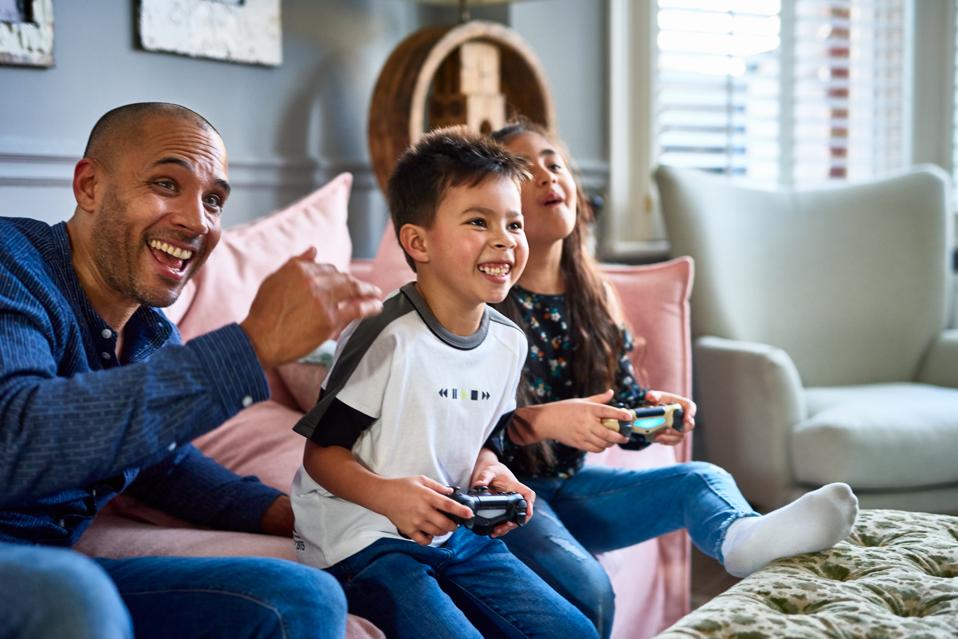 Portrait of a man sitting on sofa with a boy and a girl, having fun playing video games.

Stan Kwon, CEO of Beta Hat, a market and consumer insights agency specializing in gaming, media, and emerging technologies, confirmed the rise in gaming over the last few months. “Based on a recent survey we conducted among adult gamers in the US, almost 60% say that they’re spending more time playing games now than they were prior to stay-at-home orders going into effect.” Kwon also reported that he sees Americans “choosing to play a wider variety of games rather than sticking to the same games they were playing before” the stay-at-home order. 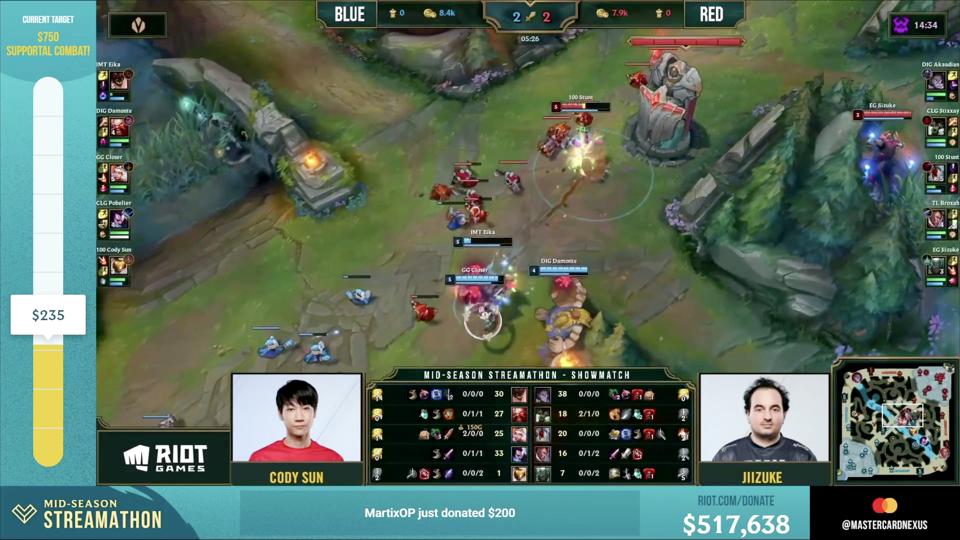 Further evidence of the rise in consumer engagement with gaming during this pandemic is that Unity Technologies UTX , the real-time 3D software development platform company, has reported that mobile game ad revenue grew 59% during April 2020 compared to April the year earlier. Unity has also reported that in-app purchases in games rose 24% in March and April of this year.

Rob Dyer, Chief Operating Officer of Capcom in the U.S., spoke to the increase in gaming seen worldwide. “While we believe there has been an increase in the frequency of people playing games given the current restrictions on going outdoors, it is possible that less leisure time will be available in the future due to factors such as reduced summer vacation time.” Dyer went on to say, “We hope our games will continue to be a source of enjoyment for people everywhere facing these challenging times.”

While it is clear that consumer engagement with gaming has increased as people have had more time at home, but what will happen when the world goes “back to normal” and time at home goes down? Michael Pachter, research analyst at Wedbush Securities and a well-known expert in the field of gaming, points out, “It’s incumbent on the gaming companies to retain the new and lapsed players” down the road.

Milky Way Photographer Of The Year: 25 Mesmerizing Images Of Our Night Sky

Will The LHC Be Humanity’s Last Gasp For Particle Physics?