Breaking
Entrepreneurs Are Bringing Transparency To Home Buying And...
Best Incentive To Get Vaccinated: Money, Messaging, Or...
Page Level Query Analysis at Scale with Google...
How A CIO Can Align IT With Business...
Blogger of the Month: Jo, Girl Eats World
6 Things Women In Business Know That Men...
How to Use First-Party Data for Ad Personalization
Pressing Reset—Putting A Fallen Unicorn Back On Its...
How We Went Viral: Promoting Content with Influencers,...
Blame Olympic Record Price Tag For Return To...
Apple iOS 14.5 Release: Should You Upgrade?
How to Come up with Podcast Topics and...
Why Gaming Gear Company Razer Launched A $50...
Technical SEO Implementations to Increase the Impact of...
30 Brilliant Ways to Market Your Eco-Friendly Shopify...
15 Tech Industry Leaders Share Overused (And Misused)...
Home Business Georgia’s Botched Election Draws Condemnations, Claims Of Voter Suppression
Business

Georgia’s primary election Tuesday was marred by long lines at polling places and broken voting machines, drawing deflection from the Georgia Secretary of State’s office and widespread condemnation from both in and out of state. 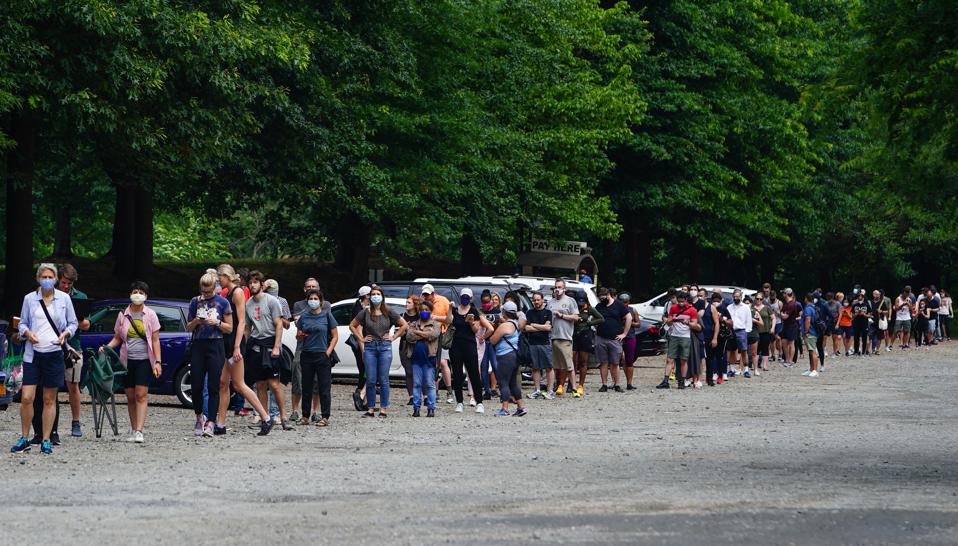 Voters have had to wait hours in line due to an insufficient number of mail-in ballots distributed and broken voting machines at polling places.

Georgia Secretary of State Jim Raffensperger took aim at officials in Fulton County, while Deputy Secretary Jordan Fuchs blamed the lines on “equipment being delivered to the wrong locations and delivered late” and “poll workers not understanding setup or how to operate voting equipment.”

Raffensperger launched an investigation into the chaotic situation, but it hasn’t halted harsh condemnation and claims of voter suppression from Georgia and across the country.

DeKalb County CEO Michael Thurmond called the issues an “attack on the democratic process” and slammed Raffensperger for a “failure of leadership,” while former State Representative Stacey Abrams said he “owns this disaster,” and that he “must stop finger-pointing and fix it.”

Former Vice President Joe Biden, who is on the ballot in Georgia’s presidential primary, called the voting problems “completely unacceptable,” while Democratic House candidate Carolyn Bourdeaux called on Raffensperger to resign, claiming he had “failed at his most important responsibility: administering safe, fair, and efficient elections.”

Georgia’s recent history with voter disenfranchisement has been a messy one. The 2018 gubernatorial election was fraught with allegations of foul play directed at now-Governor Brian Kemp, who was the sitting Secretary of State at the time. Many pointed to purges of hundreds of thousands of voters from the voter rolls and the closures of polling places in black precincts as evidence that Kemp was trying to tilt the election in his favor.

“I stayed in line despite a three-hour-and-10-minute wait because my ancestors sacrificed too much for me to be stopped from exercising my right to vote,” Raney Branch told the Washington Post. “The volunteers told us they were not allowed to test the ballot machines before 7 a.m. How are people supposed to know the machines work if they can’t test them first? Makes no sense.”

The calamitous election comes as one of the most visible examples of the difficulties some states are having in adapting their elections to the new normal created by the coronavirus pandemic. Some states already had robust mail-in voting systems in place, while others were well-prepared to shift to more mail-heavy systems. But states like Georgia have struggled to meet the sudden demand for mail-in or absentee ballots, and many voting rights advocates are concerned it could lead to wide voter disenfranchisement come November.