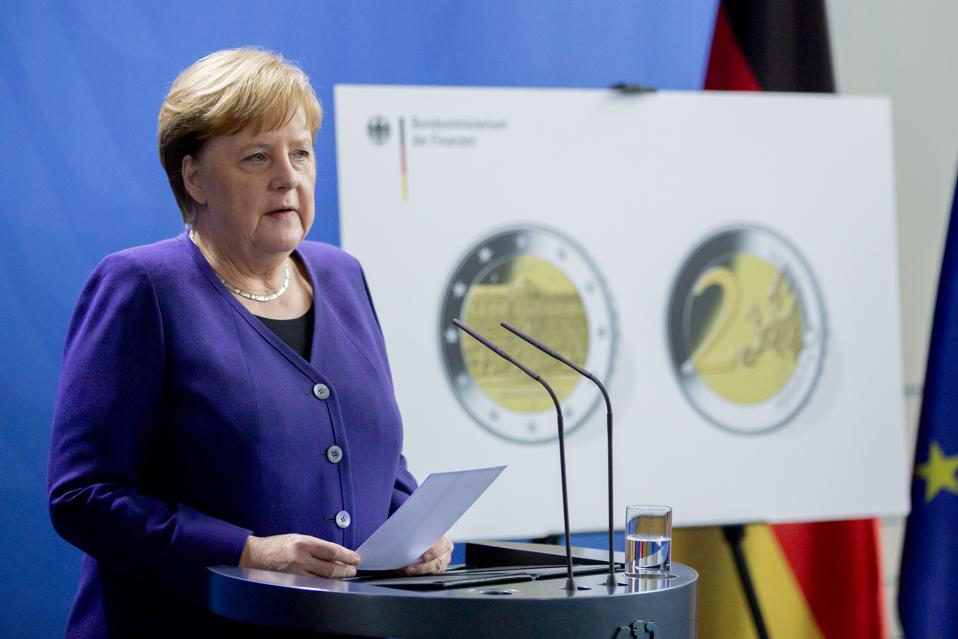 CDU leader and Chancellor Merkel protége Annegret Kramp-Karrenbauer (AKK), in office for little more than a year, is leaving after a public backlash against the CDU’s attempt to form a regional government with the backing of the far right Alliance for Germany (AfD). With both national coalition partners — the center-right CDU and center-left SPD — facing pressure to move from the center to counter political competition from more extreme parties, a new CDU leadership race will increase intra-CDU tension over remaining in the coalition or forging a new direction for the party.

New SPD leadership selected in December already leans toward exiting the coalition, and the runners-up against AKK in the December 2018 CDU leadership contest are similarly positioned. GeoQuant forecast that the current coalition government was unlikely to survive long after 2019, and AKK’s replacement combined with SPD reticence to remain in the coalition suggest that its days are numbered. However, note that Government Risk, while elevated and rising in the near-term forecast, remains constrained to the recent range that prevailed during 2H/2019. A reasonable interpretation is that the coalition may well come apart while Merkel’s government will survive. Germany’s constructive vote of confidence procedure means that a Merkel ouster can only be accomplished if her opponents can put up a candidate to defeat her in a parliamentary vote. Since her opponents are positioned on both sides of the CDU, they are very unlikely to accomplish that. As a result, Merkel could well survive as Chancellor until her term ends in October 2021, though if the coalition with the SPD formally dissolves, the CDU will likely maneuver for an advantageous early election. 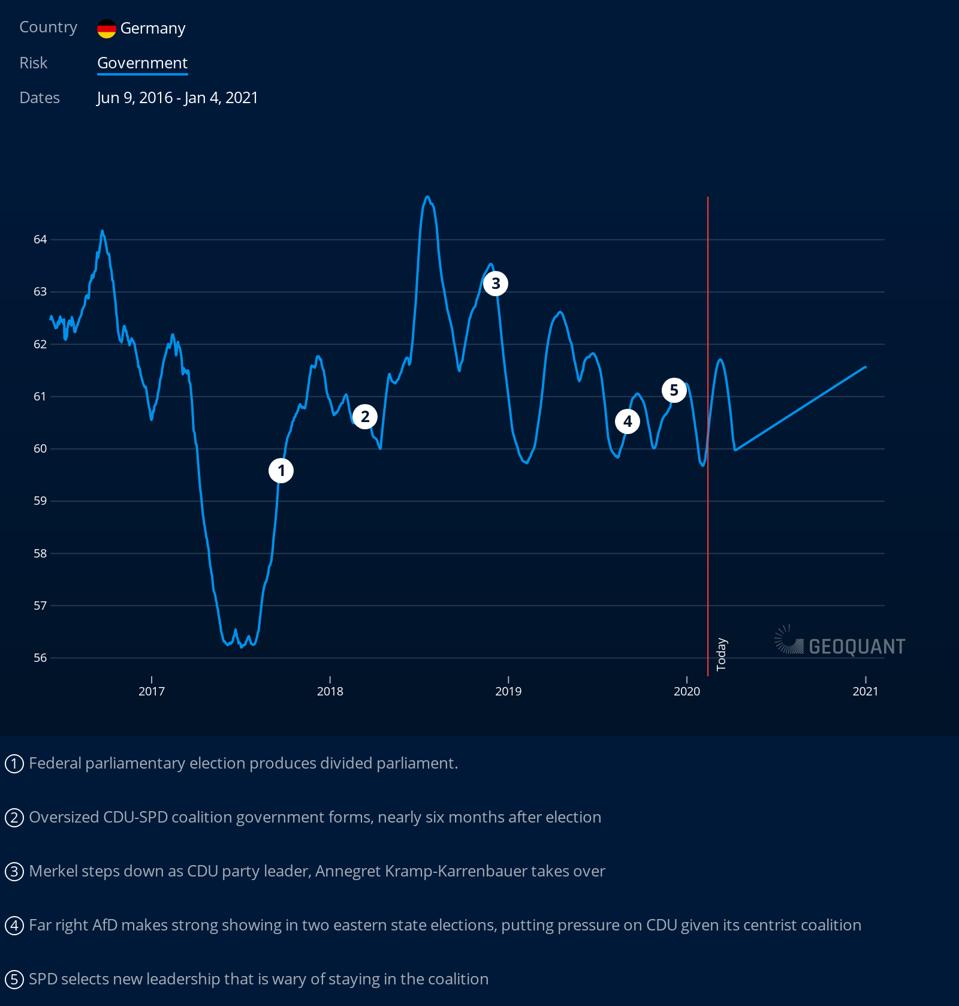 China | Trade Risks To Persist Post-Phase I Deal on Account of Huawei Tensions; Minimal Decline in Risk Forecast Through Year-End/2020

Roughly one month after its signing, the U.S.-China Phase I Trade Deal has done little to drive a softening of Chinese Investment/Trade Policy Risk, due mostly to persistent national security concerns revolving around Huawei’s global market access. Per the figure below, while a sizable decrease in risk followed the November 2019 announcement of negotiations that ultimately led to the deal’s signing, our current risk trajectory forecasts no major reduction in risk through at least year-end/2020, with risk remaining well above levels that prevailed prior to the dispute’s onset in January 2018. This forecast aligns with our longstanding stance that the Phase I Deal (like the tariff cease-fires before it) would do little to assuage bilateral tensions beyond facilitating a potential reduction in tariffs (further Chinese cuts are scheduled for Friday 14 February), on account of its failure to resolve the core national security issues underlying the dispute. In line with this stance, national security concerns have been front and center since the deal’s signing, and have largely focused on Chinese telecoms giant Huawei, culminating in a 12 Feb U.S. announcement that Huawei maintains backdoor access to its telecoms equipment, and a 13 Feb. U.S. indictment in federal courts on racketeering charges. In parallel, our Contingent Risk indicators suggest that Chinese risk trends through year-end will continue to be driven primarily by U.S.-China dynamics in light of the above; China-Germany and China-UK relations will figure less prominently due to their somewhat softer stance toward Huawei in recent weeks.

Full Insight available on the app, along with our most recent analysis of Chinese Health Risk. 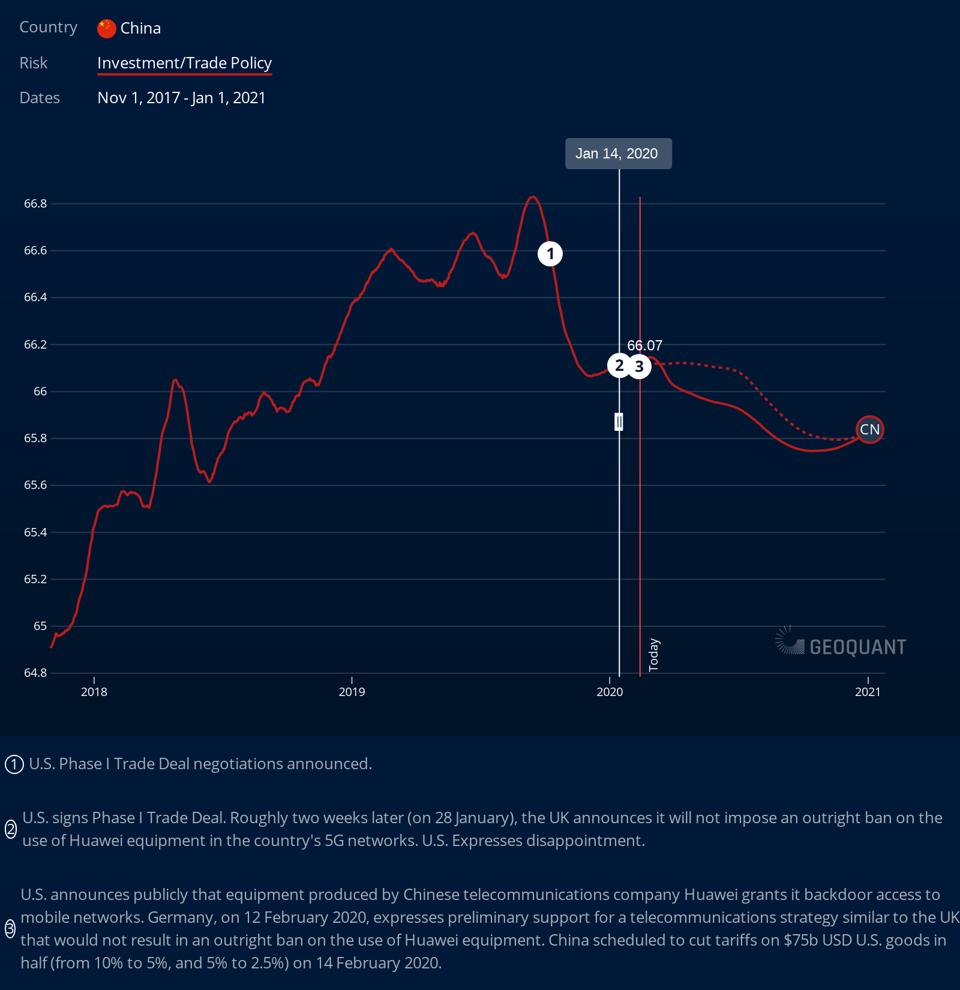 Government Instability Risk is declining into the upcoming 2 March parliamentary elections (pt. 6 below) but increases markedly thereafter, suggesting the election will produce yet another inconclusive result that impedes the formation of a governing coalition. While the current decline in risk is positive for the incumbent (still, remarkably, PM Bibi Netanyahu and his Likud Party), the fact that risk increases so clearly after the election does not bode well for the formation of a stable government. Unlike the previous two snap elections — before which Government Instability Risk increased to relatively low (April; Likud victory predicted) or high (September; Likud loss predicted) levels — the current risk trend is too noisy to generate a binary prediction on the election results. Rather, the model suggests another effective tie between Likud and the opposition Blue & White (B&W), and thus another bout of uncertainty and instability surrounding the formation of a governing coalition. Given that the overall risk level remains lower than in September, we speculate that the odds of a national unity government will be better than after the March poll, although we note again that our data is inconclusive at best. 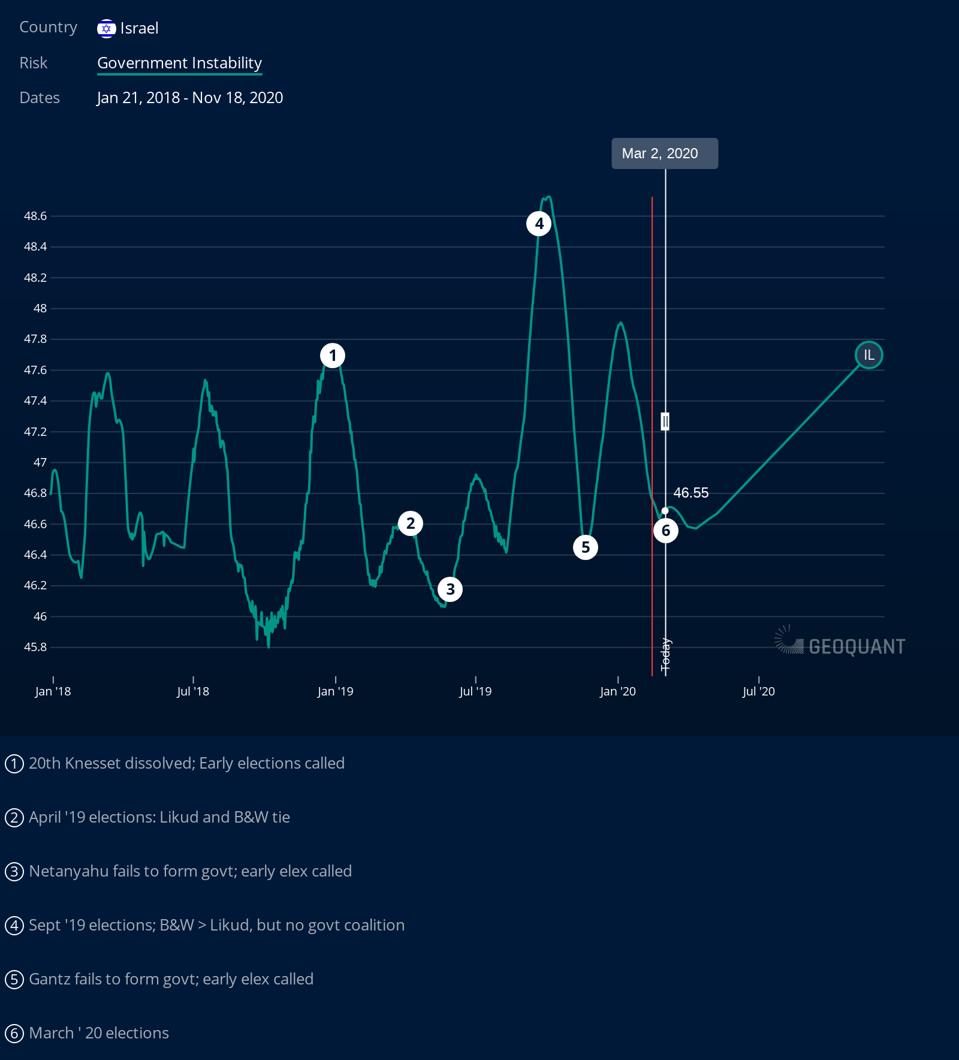 We expect the BJP’s poor showing in the Delhi assembly elections this past week to sustain an ongoing escalation in Indian Government Instability Risk through at least year-end 2020, with Government Instability Risk reaching its highest observed levels to date (since Modi’s second term began) heading into 1H/2020. Preliminary analyses suggest the BJP’s non-victory (following state election losses in Maharashtra and Jharkhand) has potential fx market implications: Since the run-up to Modi’s second term in office, Government Instability Risk has exhibited the strongest negative correlation with the INRUSD among our full set of focus risk indicators (see figure below; r = -.67), implying rupee depreciation as Risk increases. We observe similarly strong and roughly equal correlations among each of its component indicators over this same time period (see webapp for details). Our data nevertheless points toward a persistent and gradual elevation in risk as opposed to a sudden upswing, tempering the likelihood of major fx market disruption. We note in addition that our forecast runs counter to most of this past week’s media assessments that the BJP’s Delhi assembly “loss” is necessarily a watershed moment for the Modi government, given the reported small gain in BJP seats and Congress’s continued zero-seat share.

Full Insight available on the app. 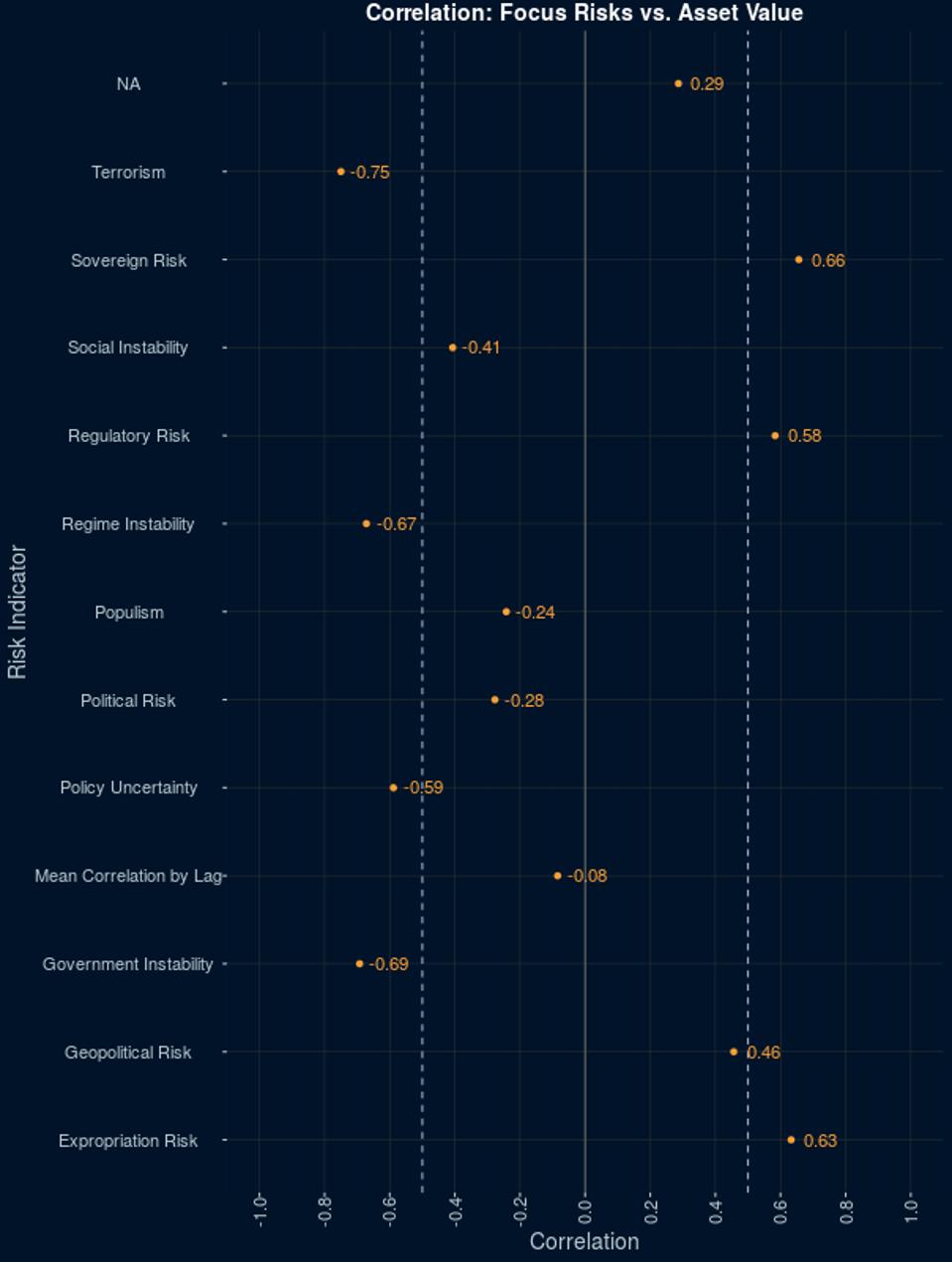 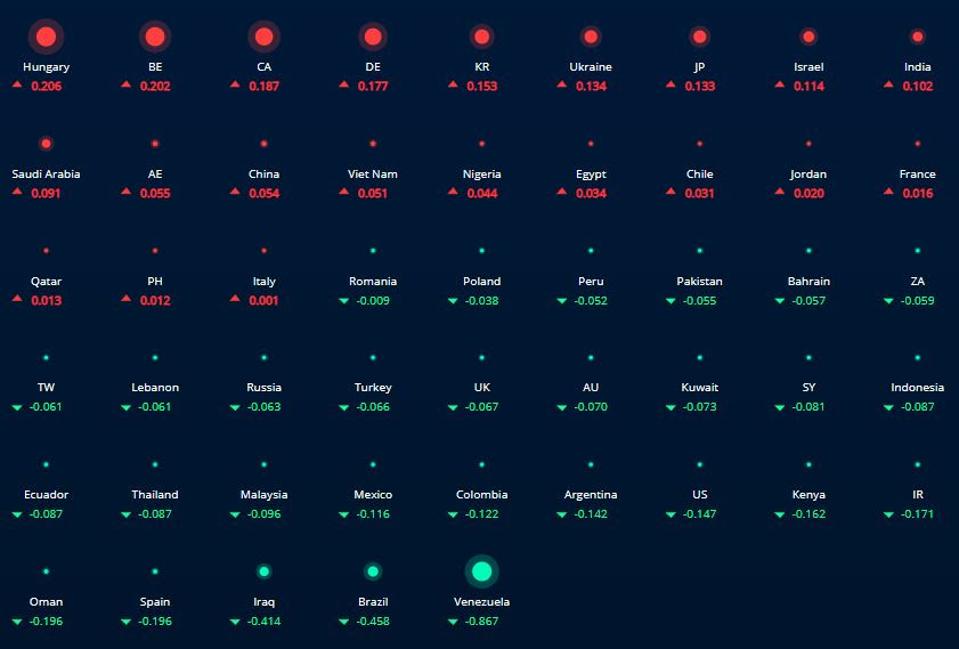 Forbes’ Road To The Cloud – Architecture, Security And The Refactor