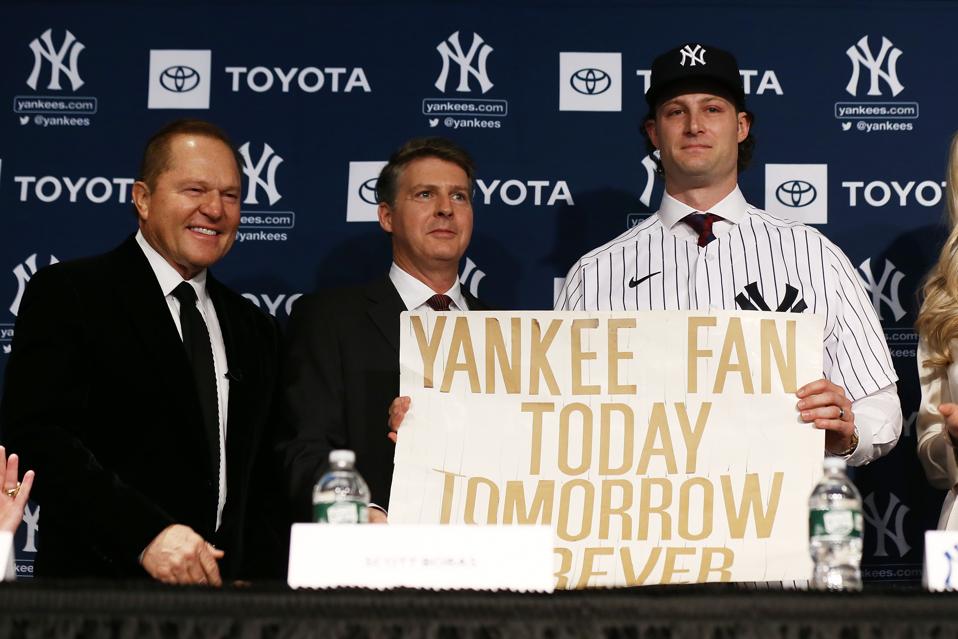 Back in late October, after his team’s latest postseason ouster, the Yankees GM was playing defense, swatting away the premise that he had “passed” on the likes of Justin Verlander, Gerrit Cole and Patrick Corbin.

“I can sleep at night with the process that we have in place,” Cashman said that day.

At least until Opening Day, anyway.

The Yankees’ process was indeed meticulous. It included fine wine, some sort of 30-pound gadget, an appearance by Andy Pettitte and a throwback sign.

But at the end of the day, this was a throwback move — offer the most money and blow the competition away.

It took nine years and $324 million — the team’s second and final offer — to get the deal done.

But after getting beat by Verlander, Chris Sale and Cole in back-to-back-to-back years, the Yankees had to have Cole, the ace that kept getting away. Cashman, owner Hal Steinbrenner and everyone else in the organization knew it.

And they opened up their wallets and finally got him.

So that’s why Cashman was smirking as No. 45 was taking a photo with Aaron Boone on Wednesday at Yankee Stadium.

The pressure only ratchets up from here. The owner has high expectations for Cole — the type Yankees fans got so used to with his father in charge.

“We need to win some championships,” Steinbrenner said. “And I believe we’re going to do that — sooner rather than later.”

It’s unknown how this investment will age. History suggests pricey moves for starting pitchers can backfire on the backend of mega deals. Performance declines. Injuries happen.

But the Bombers’ title window is wide open. A strong core is in place. Boston and Houston aren’t what they used to be.

Cole is 29. He just went 20-5 with a 2.50 ERA and 326 strikeouts. He has a dominant three-pitch arsenal. James Paxton, Luis Severino and Masahiro Tanaka follow him in the rotation — four hurlers who have all been aces of a staff at some point in their big-league careers. Paxton and Tanaka will be free agents after next season.

Top prospect Deivi Garcia is considered a No. 3-5 starter or a setup man by several evaluators. And impact starters like Cole don’t appear on the market very often for nothing more than cash.

The Yankees also haven’t had a parade down the Canyon of Heroes in a decade.

It all adds up.

The team just has to hope it doesn’t end up with buyers’ remorse like it has with the Giancarlo Stanton deal. If Stanton doesn’t opt out following the 2020 campaign, the 30-year-old veteran is still due $214 million over the next eight years.

Stanton played in just 23 games combined due to injuries. He also has a full no-trade clause if the Yankees could somehow manage to find a willing trade partner. It’s a move that figures to hamstring the club for years to come, with Stanton potentially clogging up the DH spot.

Like a former Yankees manager said, it’s not what you want. Of course, Stanton still has plenty of time to change the narrative. And his deal will be a lot easier to swallow if the Bombers can capture their 28th title.

It’s just there was a time when Stanton’s acquisition brought an increase of 550,000 tickets from the previous year, a seemingly wise business transaction at the time. There was also a time when he had an enjoyable introductory press conference in which he absolutely roasted Derek Jeter’s Marlins.

Cole seems to crave the spotlight. His responses on Wednesday were terrific. How he’ll actually perform in New York remains to be seen. But it sure seems like he can handle himself in front of a podium.

Brian Cashman finally got his man. A smirk followed. The Yankees just have to hope this goes a lot better than Giancarlo Stanton’s tenure in pinstripes has so far.

You Should Be Watching HBO’s ‘Watchmen’ For Free...

Cultivating A Culture For Digital Transformation Starts By...