Breaking
Behind The Curtain—Chapter 11 From The Inside—Chapter 10—The...
Three Classic Ways To Get New Business
With Hope, Perseverance And Faith, Two Friends Are...
Exxon Mobil Shares Cross 10% Yield Mark
T-Mobile for Business BrandVoice: From Sci-Fi To Everyday...
How To Move Your Career Forward By Making...
A Conversation With Jill Houghton, President And CEO...
VW’s Electric ID.4 Lands In Q1 2021 With...
Would Biden Enact Broad Student Loan Forgiveness? These...
Why You Must Slay Your Mindset And Stop...
Surviving The Pandemic With Your Culture Intact: How...
The Disruption Of The Consulting Industry Is Here
Remote 101: How To Create Meaningful Connections For...
How To Reassess Your Finances To Align Your...
7 Things Every Entrepreneur Should Automate
Volkswagen’s Truck Unit Ties Up With TuSimple On...
Home Business Gerrit Cole’s Signing With Yankees Will Be True Test Of Astros’ “Secret Sauce”
Business 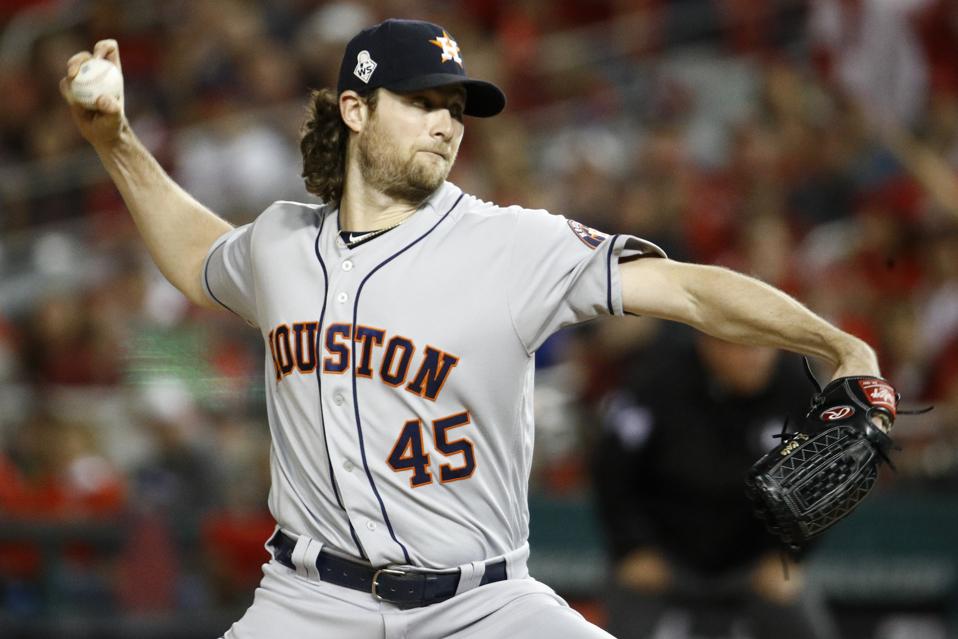 FILE – In this Oct. 27, 2019, file photo, Houston Astros starting pitcher Gerrit Cole throws against … [+] the Washington Nationals during the first inning of Game 5 of the baseball World Series in Washington. The top picks from the 2011 and 2009 drafts are both available this offseason. Cole gets the nod over Stephen Strasburg because he is two years younger. (AP Photo/Patrick Semansky, File)

No matter what the rest of the winter brings, the Yankees’ signing of Gerrit Cole will go down as the most significant move of the off-season. Along with partner-in-crime Justin Verlander, he brought the Houston Astros within one game of a World Series title this season. He, not his teammate, should have brought home the AL Cy Young hardware.

Both pitchers were blue-chip prospects who were selected at the very top of their respective drafts – Verlander at #2 overall by the Tigers in 2004, and Cole at #1 overall by the Pirates in 2011. Both, but Verlander in particular, tasted substantial success with their initial organizations. It is staggering to note, however, just how much their results improved – instantaneously – after moving to Houston.

Verlander went to Houston at the trading deadline in 2017. Here’s how he performed in the 2 1/2 seasons before and after the deal:

Then there’s Cole. The performance difference in the two seasons immediately before and after his trade from Pittsburgh in the 2017-18 off-season is even more staggering:

Obviously, win-loss records and, to a lesser extent, ERAs aren’t exactly advanced evaluation tools, but the differences are too stark to ignore. Verlander has struck out 90 more hitters and walked just over half as many hitters in 62 less innings as an Astro. Pretty impressive.

Cole’s lines look like misprints. Did he really post an ERA over 4.00 with more hits and less strikeouts than innings pitched in his last two years as a Pirate? He then struck out over twice as many hitters in his two seasons in Houston. Unreal.

The Astros took two pitchers with elite tools and immediately transformed them into their very best selves.

Before arriving in Houston, Cole was a below average contact manager who struck out batters at only a slightly better than league average rate.

He posted Adjusted Contact Scores (the production he “should have” allowed based on the exit speed and launch angle of all batted balls allowed) of 93 and 104 in 2016-17 (100 is league average, the lower number the better) with average range K and BB rates in the former year, and K and BB rates over one half-standard deviation better than league average in the latter. His “Tru” ERA- (based on Adjusted Contact Score, with Ks and BBs added back in) marks were 91 and 94 in those two seasons. Decent, but far from legendary.

In Houston, his contact management performance has not changed materially; his Adjusted Contact Scores were 107 and 92 in 2018-19. His K rate, obviously, has exploded, and it’s largely been due to increased reliance on his four-seam fastball.

In the era of analytics, pitchers have tended to throw their fastballs less. For most hurlers, this is a solid plan. Ironically, however, the starters who have emerged as the game’s very best – the Coles, Verlanders, Jacob deGroms and Max Scherzers – have done so by dominating with their four-seamers.

Cole virtually eliminated the sinker from his repertoire upon arrival in Houston, and began throwing his four-seamer more often. Not only has he thrown it more, he has also thrown it much more effectively.

The MLB average swing-and-miss rate for a four-seamer is around 8.5%. Four-seamers also tend to allow relatively thunderous contact; their average Adjusted Contact Score tends to be around 114, the highest of any pitch type.

In 2018, Cole’s four-seam whiff rate was 14.0%, over two standard deviations higher than the MLB average, tied for 2nd highest among MLB ERA qualifiers with Scherzer, behind only deGrom. The overall effectiveness of Cole’s four-seamer was somewhat mitigated by its poor 125 Adjusted Contact Score. I give all qualifiers’ offerings a letter grade; Cole earned a B+.

He got an A in 2019, as his four-seam whiff rate of 17.0% was over THREE standard deviations better than league average, while his Adjusted Contact Score of 113 was in the league average range.

Cole’s average launch angle allowed trended up from 8.6 to 10.5 to 15.1 degrees from 2016-18, before regressing a bit to the mean to 13.6 degrees in 2019. His contact authority allowed is still nothing special, but he has begun to suppress grounder authority very well; at an average of 82.8 MPH, he ranked third best among AL ERA qualifiers this season.

In 2019, his “Tru” ERA- was a glittering 53. When you strike out 39.9% of opposing hitters, you have a ton of leeway with regard to contact quality allowed. We simply can’t assume that he can repeat such a historic K rate moving forward, however. Can the Yankees expect the level of performance that can justify a nine-year, $324M investment, one that extends through Cole’s age-37 season?

Cole’s 2016-17 was worth a total of 5.9 WAR according to Fangraphs; 2018-19 was worth 13.4 WAR. His new deal requires about 4.5 WAR per season to be a break-even proposition, and that’s before you take injury risk into consideration, a substantial issue for a starting pitcher with a high-octane fastball and a substantial long-term workload.

Cole has reached that 4.5 WAR workload three times thus far in his career. He easily cleared that threshold as an Astro, but can he carry whatever “secret sauce” they provided in terms of player development at the MLB level?

The Yankees have a new pitching coach in Matt Blake, one of the many Driveline Baseball alums taking over MLB pitching programs. His imprint is on many of the young pitchers in the Indians’ system, including Shane Bieber and Mike Clevinger.

Blake and the Yankees don’t need to make Cole any better than he already is; they need him to retain the enhancements to his game that developed on the Astros’ watch.

Pitchers move from team to team all of the time, and performance obviously ebbs and flows. True talent, however, does not. “Tru” ERA- figures don’t jump around as much as ERA- and FIP- marks do. Verlander and Cole, however, were changed men after they arrived in Houston.

My gut tells me that we have already seen the very best of Gerrit Cole, but that doesn’t mean this won’t be a good deal for the Yankees. He has an elite fastball, uses it a lot and to great effect, and that won’t go away overnight.

As with Stephen Strasburg, I worry about the back end of the deal, at age 35-37. The Yankees are buying the prime age-29 and 30 seasons of Cole’s career, however, years that are already in the book for Strasburg. That should make those later years go down a bit more easily.

This 5%-yielding Dividend Stock’s Up 7% Today. Should You Buy In Too?