Breaking
Florida Supreme Court Tells The American Bar Association...
How to Write Perfect Paid Social Media Marketing...
How To Boost Productivity In Your Small IT...
How Restaurants Can Design a More Sustainable Food...
Expenses That Small Business Owners Need to Be...
How You Can Make Saying Goodbye To The...
Biden To Meet Royal Family At Cornwall’s Eden...
It’s Going To Be Emotional — Going International...
Peer Mentoring For Students: STEM & Buds
7 PR Trends in 2021: The Story So...
Google Plans Radical New Google Pixel Smartphone Upgrade
Where Did COVID Come From?
Ride To Growth With A Business Vehicle
C3.ai’s Tom Siebel: How To Scale AI
Moz Acquired by iContact Marketing Corp
10 Examples of Brands Using TikTok Stitch and...
Home Business Gervonta Davis Misses Weight On 1st Attempt Ahead Of Championship Showdown With Yuriorkis Gamboa; What Now? (UPDATED)
Business 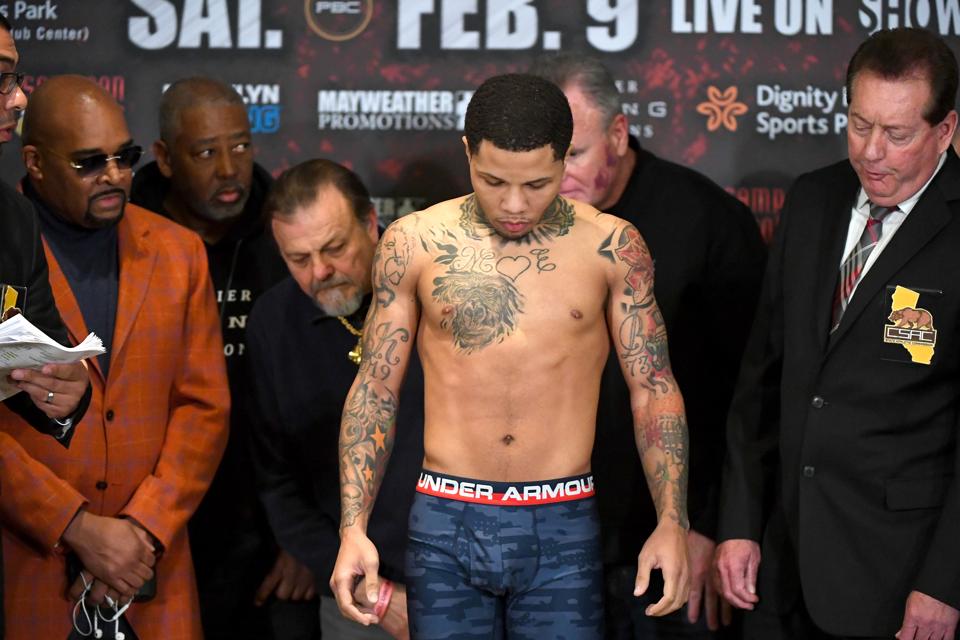 LOS ANGELES, CA – FEBRUARY 08: Boxing promoters and officials look on as boxer Gervonta Davis fails … [+] to make weight on his first attempt for his WBA Super Featherweight Championship fight against Hugo Ruiz (not pictured) at the The Westin Los Angeles Airport hotel on February 8, 2019 in Los Angeles, California. Gervonta returned to the scale 30 minutes later and made weight. (Photo by Jayne Kamin-Oncea/Getty Images)

On Friday in Georgia, Gervonta Davis weighed in at 136.2 pounds ahead of his battle with Yuriorkis Gamboa for the vacant IBF Lightweight title. Davis must weigh 135 pounds or less, or he is ineligible to win the title.

The fight will almost certainly proceed, but Gamboa (a huge underdog in the fight) would be the only one capable of winning the championship. Davis has been given one hours to drop the 1.2 pounds needed to make the championship weight.

I’ll update once the final verdict is in.

The WBA, Showtime and all with a vested interest in Saturday’s fight clearly wanted to make every effort to allow Davis to make weight. Instead of the initially announced one-hour extension, Davis was granted two hours to make weight, and he did so weighing in at 134.8. The championship fight is now official.

Davis moved up to lightweight to pursue a world title in a second weight class. The climb in the division was presumably to take on more of a challenge, and to make it easier for the 25-year-old to make weight.

At just under 5’6”, Davis would seemingly be capable of making 135 pounds without much of a strain, but that hasn’t proven to be the case. He’s had issues making weight in the past. In fact, he was stripped of the IBF junior lightweight title in August 2017 when he was overweight ahead of his fight with Francisco Fonseca. He also failed to make weight on his first attempt before he fought Hugo Ruiz in February.

Still, in some ways, this one is a bit more egregious.

Davis is blossoming into a bonafide superstar of the sport whose toughest opponent may be his own lack of professionalism and maturity. All eyes are on Davis for this fight. It’s his star power that helped to bring boxing back to Atlanta, and he’s in a position to become a PPV-level champion.

Other greats of whom’s footsteps he’d like to follow, didn’t make these kinds of errors on their way to the top of boxing’s popularity and pound-for-pound lists.

Yahoo Sports’ Kevin Iole correctly pointed this out in his tweet below:

Also, it’s quite obvious, the Georgia athletic commission isn’t accustomed to having major fights take place in its state. The weigh-ins and staredown were a disaster waiting to happen.

No matter what happens on Saturday night, this will be a bit of a stain on Davis’ reputation. It’s not something he can’t overcome, but it’s an area of his professional life that he must clean up if he is to ascend and reach his potential.

Keep An Eye On K’Andre Miller, Who May Impact Rangers’ Defense Next Year