Home Technology Ghostly ‘Space Clouds’ And An Eerie Light On The Moon: What You Can See In The Night Sky This Week
Technology

Ghostly ‘Space Clouds’ And An Eerie Light On The Moon: What You Can See In The Night Sky This Week 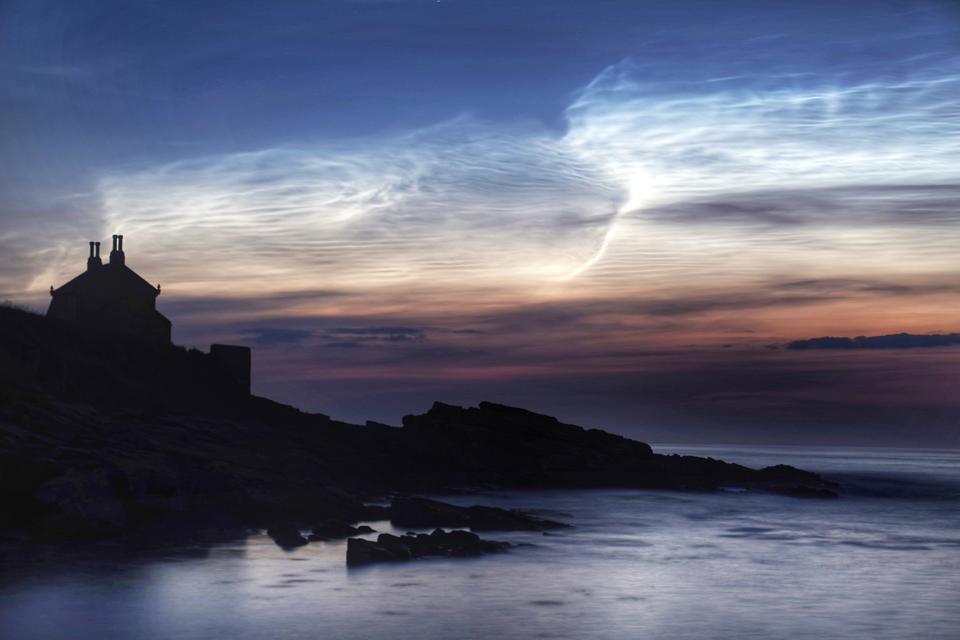 Noctilucent clouds gather over The Bathing House, a grade II listed cottage that sits on the cliff … [+] edge on the Northumberland coast. (Photo by Owen Humphreys/PA Images via Getty Images)

The June solstice has come and gone. Phew! In the northern hemisphere, the days will now get shorter and the nights longer, which for stargazers is something of a relief.

In the wake of a New Moon and a “Solstice Ring of Fire Eclipse” in some parts of the world, this week we can all watch our satellite gradually light-up. As it does, an eerie glow will dominate its darkened limb for a few days—“Earthshine—while “ghostly” noctilucent clouds high up in the atmosphere may reveal themselves.

It’s not even the only ghostly sight in the night sky.

A tiny crescent moon, just 3% illuminated, may be visible just above the northwest horizon, with the stars Castor and Pollux in Gemini in the background.

You should get a much clearer view of a crescent Moon today. Now 8% illuminated, in a clear sky it will be a stunning sight, not least because sunlight being reflected onto the Moon by the Earth ought to be visible on our satellite—“Earthshine.” It’s a subtle sight, but once seen cannot be unseen; look at the Moon’s darkened limb with your eyes, or better still, with a pair of binoculars, to appreciate this fine sight.

With those binoculars in hand, scan around the Moon—specifically to its left—to find a scatter of stars known as the busy Beehive Cluster. Also focus on the “terminator”—that line between light and dark on the Moon, which is where you can see mighty shadows reveal massive craters and mountain ranges on the Moon’s surface.

It won’t be much of a sight, but if you’re out stargazing late tonight keep an eye out for the five shooting stars per hour expected from the (minor) June Boötids meteor shower. The shower’s radiant point—the apparent source of the shooting stars—is the constellation of Boötes.

What has cloud-spotting got to do with astronomy? In an ideal world, not much, but since this time of year the twilight seems to last forever at northerly latitudes, consider looking for a “ghostly” display of noctilucent clouds (NLCs).

At their best in northern twilight skies during June and July, NLCs are very delicate and high altitude clouds of icy dust that form about 50 miles/80 kilometres up, and because the Sun is never too far below the horizon, they get subtly lit-up for a short time. They’re best seen with the naked eye or a pair of binoculars.

Trump Says China Controls Bitcoin— Yet His Administration Supports It.

Is COVID-19 Coronavirus A Bioweapon From A Lab?...

From Bookworms To Wine Marathoners: Meet The Newcomer...