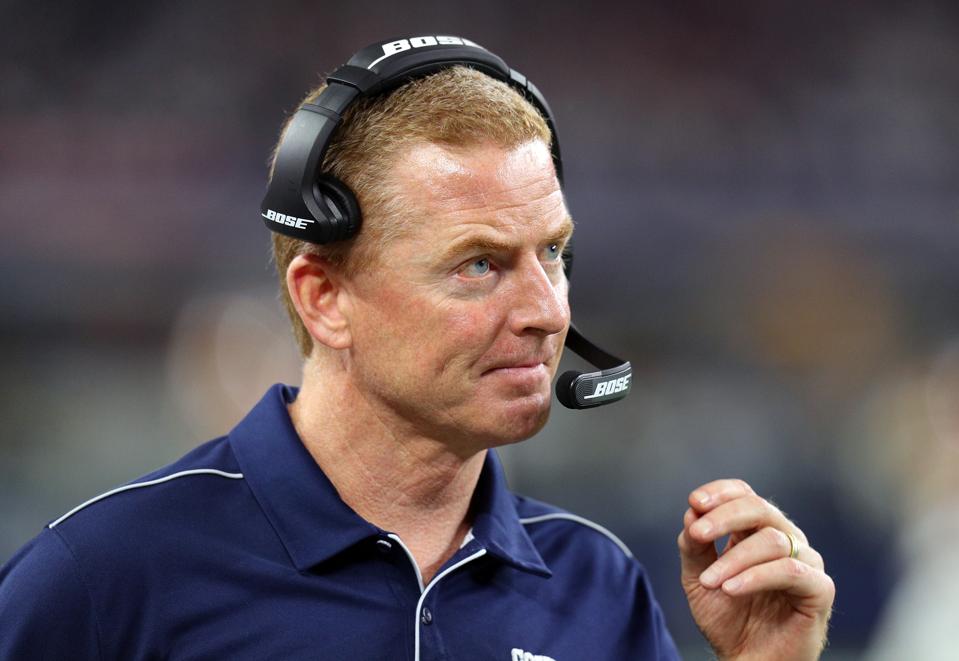 The Giants made it official Friday night, announcing their three hires for the coordinator positions on new head coach Joe Judge’s staff.

The hiring of Garrett, who served as the Cowboys head coach for the last ten seasons, is probably the most intriguing for the Giants for numerous reasons.

The most obvious is that Garrett, who was a career NFL backup—he served int hat role during the 2000-03 seasons behind then Giants starter Kerry Collins—can bring a different perspective to the big picture in terms of Daniel Jones’ on-going development.

Garrett has been relatively successful in the development of Cowboys quarterbacks Tony Romo and Dak Prescott. He has put together offensive systems that have optimized not only their unique skills but also the strengths of the Cowboys’ personnel.

The other advantages Garrett brings to the table include experience as an NFL head coach—something that Judge, a rookie NFL head coach, can likely draw upon when things go off script—and intimate knowledge of the NFC East personnel, which Judge, coming from the AFC East, doesn’t necessarily have.

“I’ve known about Jason for a long time, not only through the general public as well-known as he is as head coach of the Cowboys,” Judge said in a team-issued statement.

“There were guys I worked with that I came across in my career at both Alabama and at the New England Patriots that worked with Jason through their time in Miami with him. They consistently all reflected on how smart he is, how great a teacher he is, and how his perspective of the game was through a different lens than most coaches. And when he sees it, he’s able to communicate it and paint that mental image to the players. And he does a fantastic job of making in-game adjustments.”

The addition of Graham, who spent last season as the Dolphins defensive coordinator, his first such time in that role, is interesting in a different way.

Graham, the Giants defensive line coach under Ben McAdoo during the 2016-17 seasons, didn’t have a solid defense in Miami, mainly due to injuries and personnel decisions made by those above him.

Yet, he still managed to put together a unit that helped the Dolphins win five of its last nine games after an 0-7 start, including the regular-season finale against the Patriots that cost New England a first-round bye in the playoffs.

Graham, who ran a multiple-front defense aimed at putting players in the best position to succeed, is expected to run the same philosophy with the Giants, according to Judge. “We share the same vision to be able to run multiples and use the players on our roster to the best of their ability to match up against the opponent,” he said.

McGaughey is one of three holdovers from former head coach Pat Shurmur’s staff (the others being receivers coach Tyke Tolbert and special teams assistant Tom Quinn who, although not announced by the team as having been retained, sources confirmed will be back).

McGaughey, who was the assistant special teams coordinator under Quinn on Tom Coughlin’s staff, helped shape a simplistic, yet effect group that yielded two Pro Bowlers in 2018 (kicker Aldrick Rosas and Michael Thomas, and which continued in 2019 to be one of the bright spots on the team.

This year, the Giants’ kickoff coverage team led the league by allowing an average return of 18.1 yards. The punt coverage team was tied for fifth as opponents averaged just 5.7 yards a return. Conversely, the Giants were fourth and 10th, respectively, in the NFL in punt (9.8 yards) and kickoff (23.5 yards) return average.

Also, punter Riley Dixon, voted as an alternate to the Pro Bowl, finished ninth in the league with a franchise-record 42.3-yard net average. He set the previous mark of 41.8 yards, set in 2018.

“He gets the most out of his players,” Judge said of McGaughey. “I’ve competed against him, and I knew it was always going to be tough sledding in the game there. From the perspective of having to go against him, you understand you don’t want to get him out of the building; you want to hold onto guys like that.

“He and Tom Quinn do an outstanding job of working together, coaching the players in techniques and coming up with schemes for game plans that allow them to apply pressure on the opponents.”

The Giants have not announced any other coaching hires. Still, in addition to Quinn and Tolbert, various reports, as compiled by the Giants Maven at Sports Illustrated, claim the team has a new running backs coach, Burton Burns, and a new quarterbacks coach, Jerry Schuplinski.

With the Senior Bowl practices starting this week—the Senior Bowl has long been considered as an excellent place for new head coaches to find assistants—the Giants could fill the remaining openings on Judge’s staff within the next few days.

Bitcoin Bros Are Directing Their Powerful Computers Toward...

How To Get A Lightsaber During Fortnite’s ‘Star...

The Impact Of Artificial Intelligence On Influencer Marketing