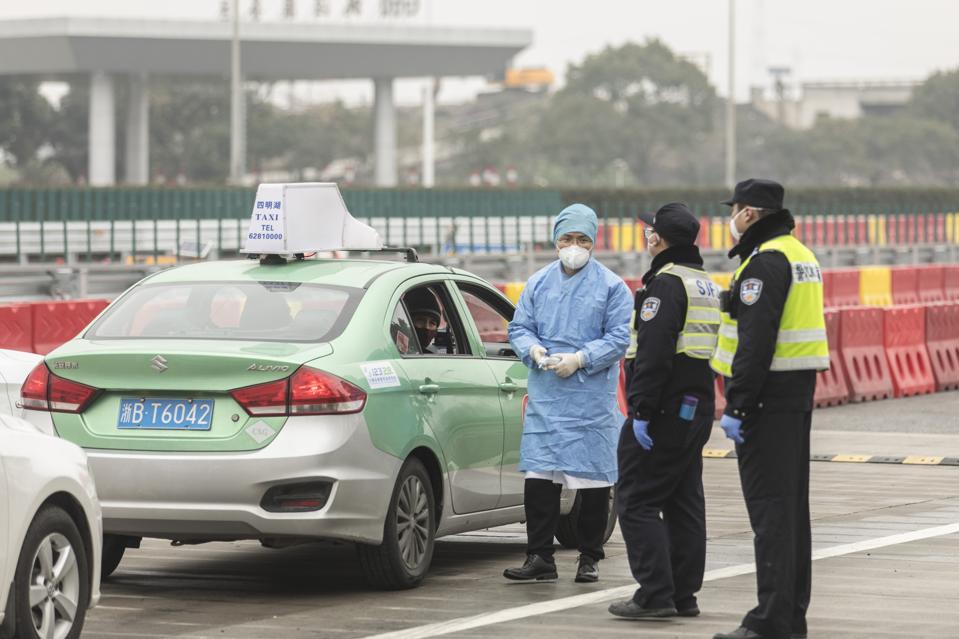 A masked health professional and police officers check the driver of a vehicle at a screening … [+] checkpoint on a highway toll station on the outskirts of Shanghai, China, on Tuesday, Jan. 28, 2020. Governments, global companies and international health organizations rushed to contain the spread of a SARS-like coronavirus that has claimed more than 100 lives in China, with the number of cases soaring overnight. Photographer: Qilai Shen/Bloomberg

The spread of coronavirus is raising fears of a global pandemic, rattling markets and kicking into gear governmental plans/action to respond to this social and economic shock. Among our daily basket of Governance Risk indicators, State Capacity Risk — which tracks governments’ ability to deliver public goods/services and implement/enforce policy — is most relevant to this analysis; it is ultimately the state capacity underlying a government’s plans and actions that will determine the credibility of those plans and the effectiveness of subsequent actions. Per the figure below, our data suggests that among economically prominent and exposed countries, the U.S., Japan, South Korea and Italy (in that order) have the lowest State Capacity Risk in responding to the coronavirus health shock (although U.S. State Capacity Risk is increasing). China’s State Capacity Risk is significantly higher than the previous four countries, although still far lower than Iran, where risk is especially high/worrying. 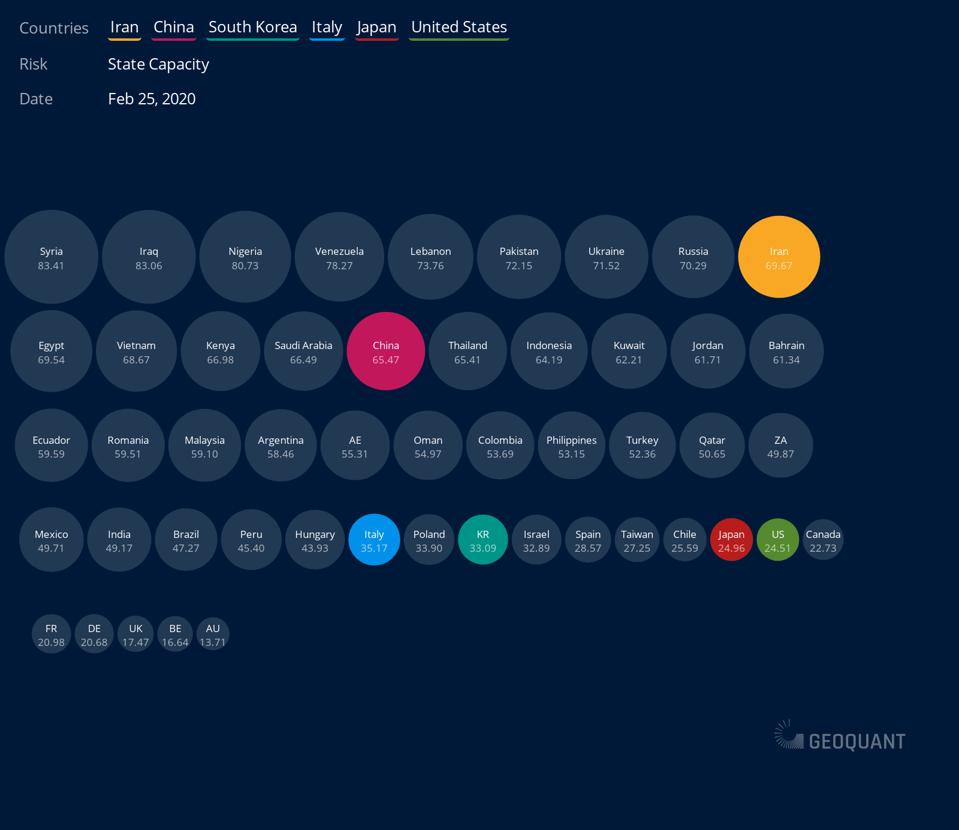 Per our recent Insight, a country’s level of Social Risk is also key to gauging a government’s ability to weather a potential pandemic shock. Japan and South Korea clearly have the lowest Social Risk, followed by Italy. The United States — highly polarized but also highly developed — is next, followed by the less polarized but less developed China. Iran again stands alone as the riskiest country in this set, Health Risk — a key sub-component of overall Social Risk — is forecast to decrease in South Korea and China, while Japanese, Iranian and Italian Health Risk is forecast to increase. While Japan’s low State Capacity Risk and Social Risk should help the government respond to this threat, Italy will have a relatively harder road ahead. Iran, strikingly, is the country most at risk across the board.

Prime Minister Mahathir’s resignation from the prime ministership this past week comes amidst a marked upswing in Institutional Support Risk alongside of upward-trending – albeit minimally elevated – Government Instability Risk. While the situation remains fluid, earlier this week we interpreted trends in these indicators (respectively) as suggesting the following two outcomes were likely to materialize over the coming months: (1) Mahathir is moderately likely to remain as prime minister regardless of the composition of the new government’s legislative coalition; and (2) a new stable coalition is unlikely to form prior to 2H/2020. The latter stems from the likely necessity of allowing for UMNO participation in any new governing coalition to assure sufficient seat share, and Mahathir’s reticence to do so. Developments over the past day have nevertheless made us less bullish on both accounts, following today’s decision by Mahathir’s own party (Bersatu) to put forward its president, Muhyiddin Yassin, as candidate for prime minister, and the apparently willingness of UMNO legislators to support his candidacy, bringing Bersatu much closer to having sufficient seat share to form a new government. While Mahathir’s opposition to UMNO participation in a Bersatu coalition is likely to persist and exert some sway over the resulting coalition’s composition, the Bersatu candidate shake-up now makes an alternative PM — and coalition stability at an earlier date — somewhat more likely.

With respect to markets, relationships between our risk indicators and the USDMYR suggest that the ringgit’s sharp slide following Mahathir’s resignation announcement will ultimately be tempered by relatively stable/low Government Instability Risk, per our longer-term forecast that Mahathir will remain at the helm of government. Further clarity is expected following a potential parliamentary vote to select a new prime minister (initially scheduled for Monday, but tentatively cancelled by the king as of this morning), or alternatively, proceed with snap elections.

Full Insight now available on the app. See our December 2019 Insight for the most recent prior (and highly complementary) forecast. 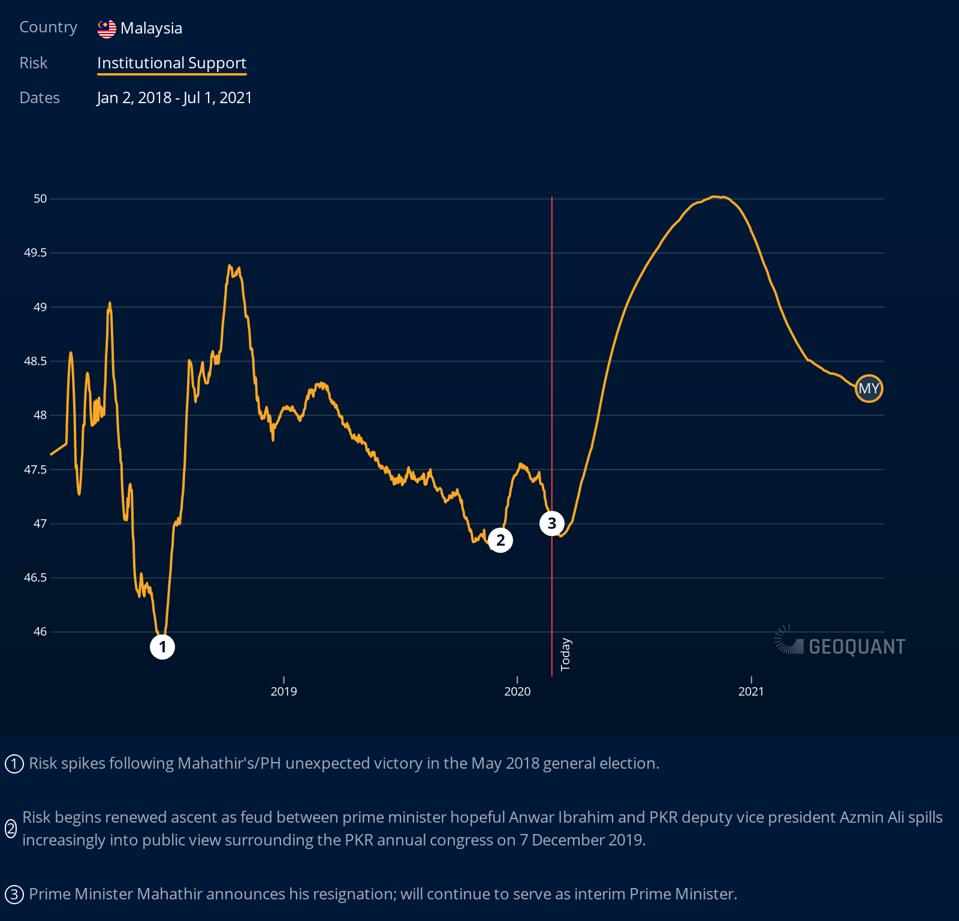 Yesterday’s deadly airstrike on Turkish forces by Syrian/Russian forces in Syria’s Idlib province has brought geopolitical tensions between Turkey and Russia to a new high. Per the figure below, ‘contingent’ Geopolitical Risks between Turkey and Russia spiked to a new high before the incident and has in fact been increasing since late Jan 2019, when the latest Iblib ceasefire broke down and Russia-backed Syrian forces pressed on with their ‘Dawn of Idlib 2’ offensive. [Notably, Turkey-Syria contingent Geopolitical Risk also increased in late January, albeit not as severely as below]. Currently, Turkey-Russia contingent Geopolitical Risk is not projected to increase further, but the future trend is clearly elevated relative to recent history, suggesting tensions in Idlib will remain high and thus prone to further incidents. 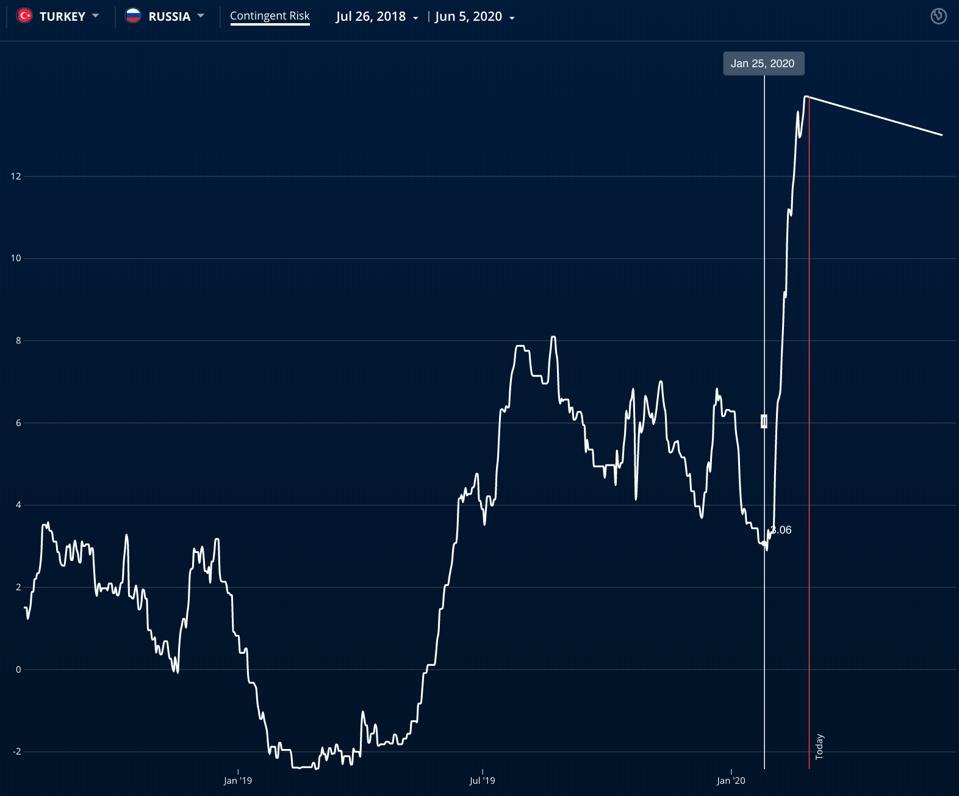 Full Insight on the app

Hungary | Inflation Rears its Head; Defeating it will Have Costs as Coronavirus Slows Global Economy

Hungary finds itself fighting the highest inflation in the EU, 4.8% in January, after pursuing a very dovish monetary policy. Inflation has driven the forint to a record low against the euro and is now pushing short-term three-month rates up a half-point with 10-year sovereign yields up slightly. If elevated inflation persists until the 11 March central bank meeting, a vigorous anti-inflationary response will have to navigate a global economy feeling a downdraft as coronavirus places a drag on economic activity. GeoQuant’s Sovereign Risk indicator has tracked this risk closely since 2013, correlating strongly with Hungarian 10-year bond yields (r = +0.78), providing valuable signals ahead as Hungary’s central bank balances the tradeoff between inflation management and growth. Track this risk on our app if politics ends up constraining effective inflation management or if the central bank’s response produces a politically problematic economic slowdown. 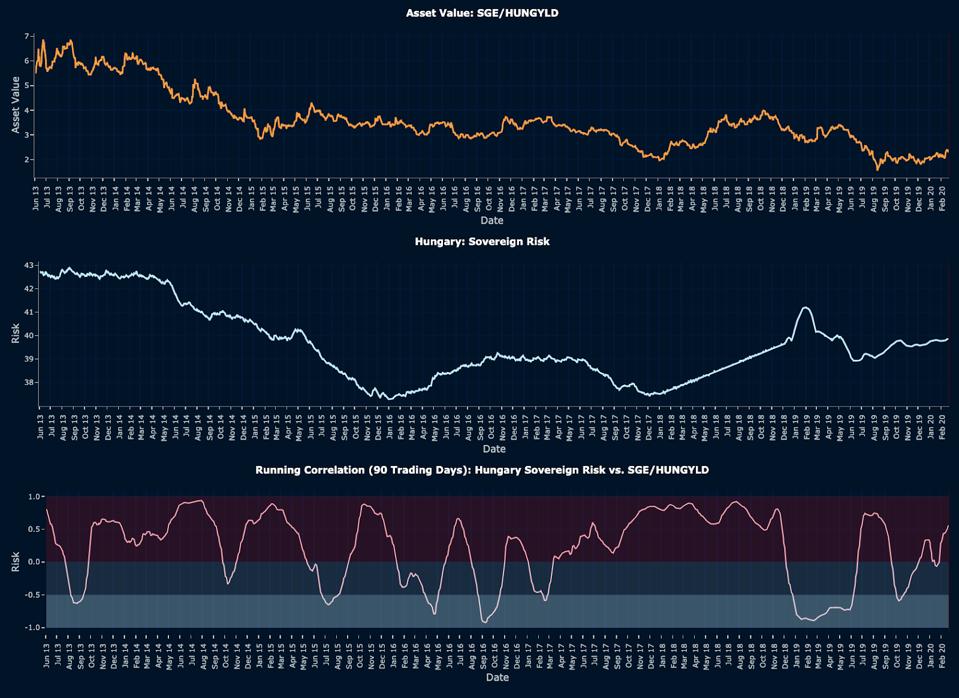 Following heightened political certainty introduced by the resignation of Malaysia’s prime minister earlier this week and concerns surrounding related market dynamics, our data suggests that ringgit fallout linked to the resignation may be short-lived. While our Institutional Support Risk indicator (one of our proxies for legislative coalition instability; see Insight summary above) has spiked dramatically, our Government Instability Risk indicator (more reflective of executive staying power) is elevated but relatively stable (subject to today’s uncertainty surrounding the outcome of a potential parliamentary vote to select a new prime minister this upcoming Monday — since placed on hold by the king — and Bersatu’s eleventh hour endorsement of its own party president as PM candidate instead of Mahathir, who now serves as Executive Chairman; see analysis above for details). Since Mahathir returned as PM in May 2018, the latter indicator has been more strongly associated with the USDMYR (see figs below, specifically steeper fit line in right panel), suggesting that this past week’s (relatively minor) hit to the ringgit via the coalition instability channel would be partially be counterbalanced by Mahathir staying on as PM, though that outcome remains increasingly in doubt. See full Insight on the app. 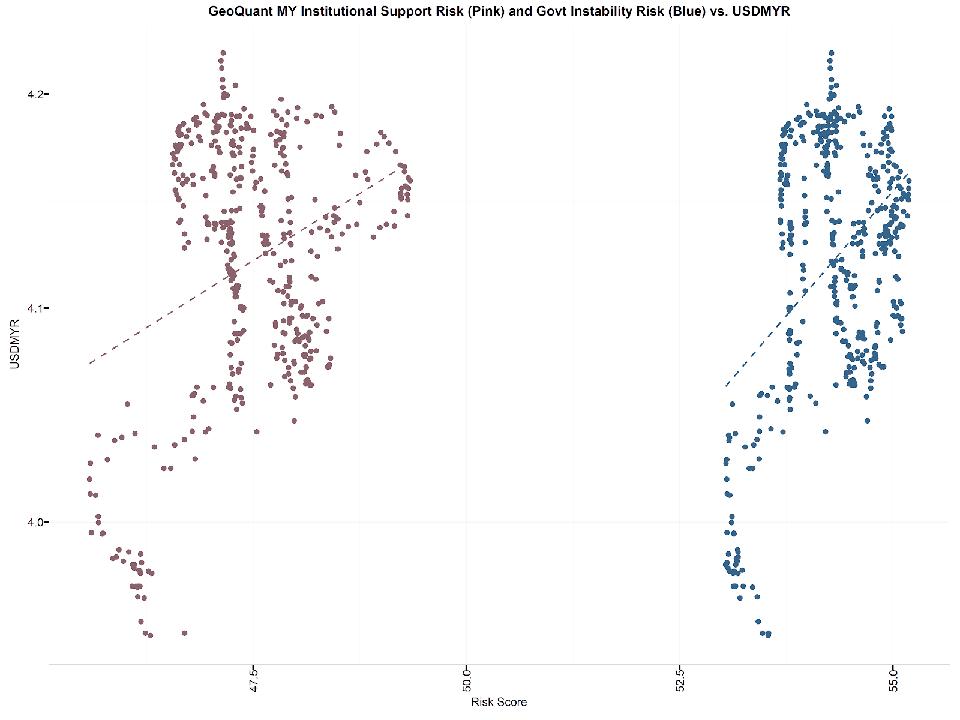 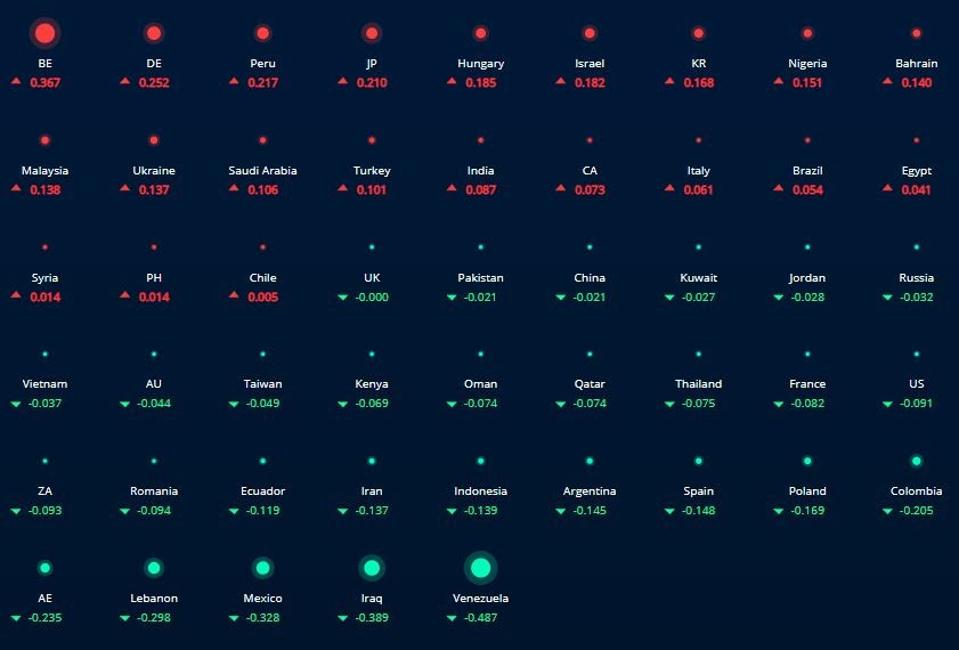 Why the Coronavirus Is Lowering Your Gas Pump Prices

Newton Running Is A Boutique U.S. Running Shoe Brand In A World Of Global Giants