Breaking
Why businesses should prioritise Cyber Security
What You And Your RTO Business Need To...
4 SEO Trends for Websites You Should Not...
3 Reasons Why Desk Booking Is Rising In...
8 Tips to Play & Win at Online...
How can software benefit facility management?
Do Professional Casino Players Pay Taxes for the...
Becoming a Trading Expert: What Is the Best...
Dos and Don’ts for B2B Organisations in 2022
Should your business be using Machine Vision?
Colour Masterbatch vs Raw Pigments – Which Is...
Keeping your business moving as you expand online
Top Four Celebrities Who’ve Invested In Cryptocurrency
Why is Cloud Computing Tipped to be the...
How to Raise Money for Non-profit Organizations in...
Choosing the right theme for your WordPress Business...
Home General Global Smartwatch Market: Apple 34%, Huawei 8%, Samsung 8%, Fitbit 4.2%
General 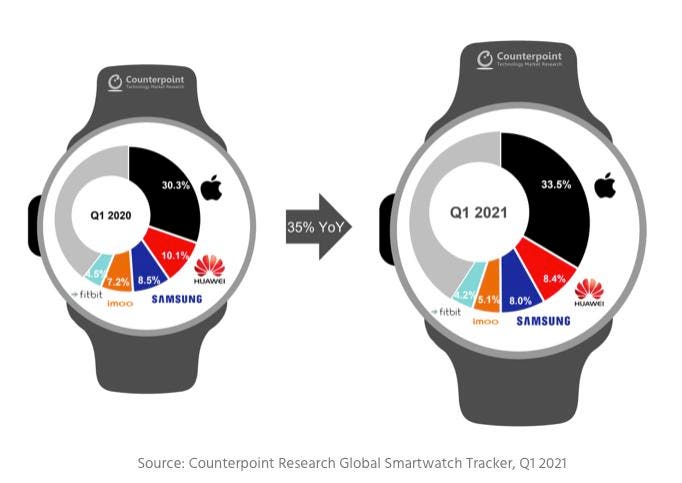 Apple is winning so much that, like fans of a former U.S president, it must be getting tired of winning. According to a Counterpoint Research report, Apple grew its Apple Watch shipment by 50% year-over-year in the first quarter of 2021, increasing market share slightly as the overall market grew 35%.

“Apple was able to further solidify its leadership position in the market by widening the portfolio from Watch SE to Series 6 at the right time,” Counterpoint senior analyst Sujeong Lim said in a statement. “This may drive Samsung to launch a mid-price-tier model to boost growth.”

Current market share is a three-way split between Apple, four second-tier brands, and about two-fifths of the market split among dozens of smaller vendors.

It’s important to note, however, that a 33.5% device share for Apple probably represents a great than 60% revenue share. The Apple Watch Series 6 retails anywhere from $400 to well over $1,000 depending on options, case style, band style, and more. A Fitbit Sense retails for $300, Samsung Galaxy Watches range from $200-400, and many of the Huawei and smaller brands are significantly cheaper.

Google only achieved 3.9% market share for its smartwatch operating system in the first quarter of 2021.

That should change soon, however.

“Hopefully, Google’s new Wear platform will be shipping in the next generation of the Galaxy Watch series in late Fall,” Lim said. “The focus would be to not only improve performance, such as battery life, but also improve on the AI, newer apps and services, and integration with Android smartphones. Samsung will also be able to better target the broader Android smartphone user base.”

And, of course, Google completed the acquisition of Fitbit in January, and its devices will be moving over to Wear OS, presumably.

The smartwatch market is big enough to be consequential even for giants like Apple, Samsung, and Google, but selling lots of smartwatches isn’t just about device profits. It’s also about ecosystem lock-in and market expansion as consumer-medical devices become more common, says Counterpoint VP Neil Shah.

“Wearable devices and services are going to become important for companies such as Apple, Google, Facebook and Amazon as they increasingly expand their reach in healthcare, pharmaceutical and insurance verticals directly or indirectly,” Shah said. “This can include selling services such as Apple Fitness+, predictively cross-selling medicines and healthcare solutions, or attracting marketers to their ad platforms based on the health profiles built with the enormous amount of data generated via the number of sensors on these wearable devices.”

How Has the Workplace Changed in the Last 20 Years?

An Open Letter To CEOs: Why Your CMO Is Thinking About Leaving