Breaking
How, When And Where You Can See A...
New $2.2 Trillion Stimulus Bill Proposed—$1,200 Stimulus Checks,...
Why Do We Do What We Do? Manipulating...
California Brand Goes All-American As Amazon Bans Foreign...
The 3 Best Analytics Companies of 2020
Senator Cory Booker: Supporting Small, Minority-Owned Businesses Will...
Trump’s Taxes Are Finally Leaked—What’s Next?
Washington Heats Up Ahead Of First Presidential Debate:...
Systemic Racism Leads To Disparities In Nursing Home...
The New Regular: Prepare For Conflicts Of Customer...
Web VR.0 – Have VR Websites (Finally) Arrived?...
This Next Evolution Of E-Commerce Did $18 Billion...
This Next Evolution Of Ecommerce Did $18 Billion...
IRS Taxes Most Lawsuit Settlements And Exact Wording...
13 Questions To Answer Before You Die
Just Launched: Long-Term Stock Exchange For Companies Building...
Home Business Golden Globes 2020: Top 7 Surprises Of The Night
Business 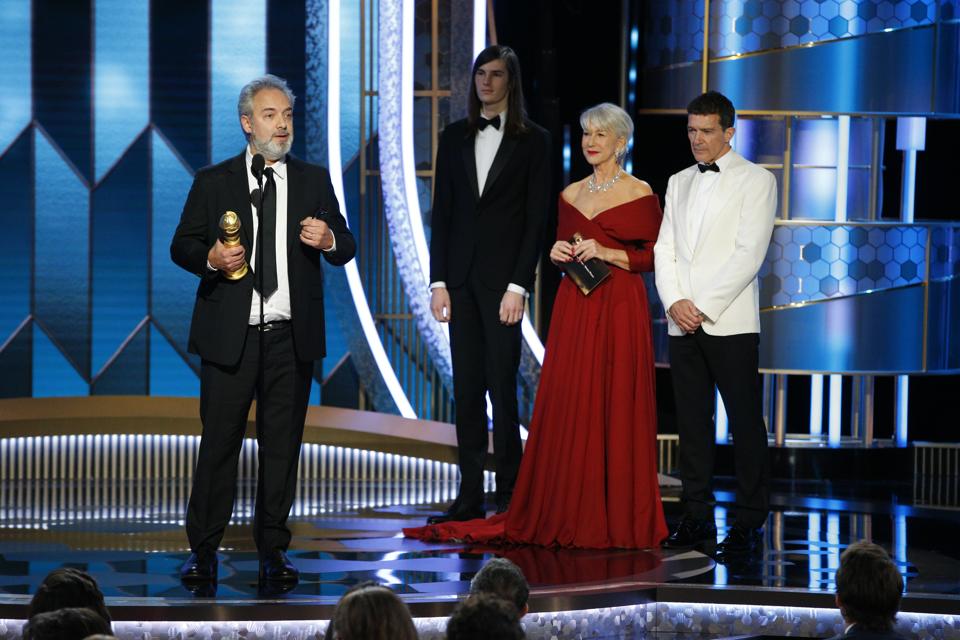 The Hollywood Foreign Press Association handed out awards in 25 categories for the 77th Annual Golden Globe Awards tonight and if history repeats itself, this evening’s winners in the film category are well-positioned to get Oscar buzz.

As things with the HFPA often go, nothing is really predictable at the Golden Globes. Overall, Sony Pictures Releasing won three film awards, followed by Paramount, Universal and Warner Bros. with two each. As for television networks, HBO took home the most awards with four, followed by Hulu and Amazon Prime Video with two each.

In regards to films, Once Upon A Time…In Hollywood won the most awards for a single movie with three, followed by 1917, Joker and Rocketman with two each. As for television series, three tied with the most wins with two each: Chernobyl, Fleabag and Succession.

Here are the Top 7 surprise wins of the night.

Sam Mendes’ war drama 1917 beat out Netflix’s three contenders: Martin Scorsese’s The Irishman, which won no awards, Noah Baumbach’s Marriage Story and The Two Popes, as well as Joker. Overall, the streamers didn’t sweep the night as expected. Netflix, Hulu and Amazon Prime Video each won some awards but this year the HFPA spread the awards out between the streaming platforms and traditional studios. 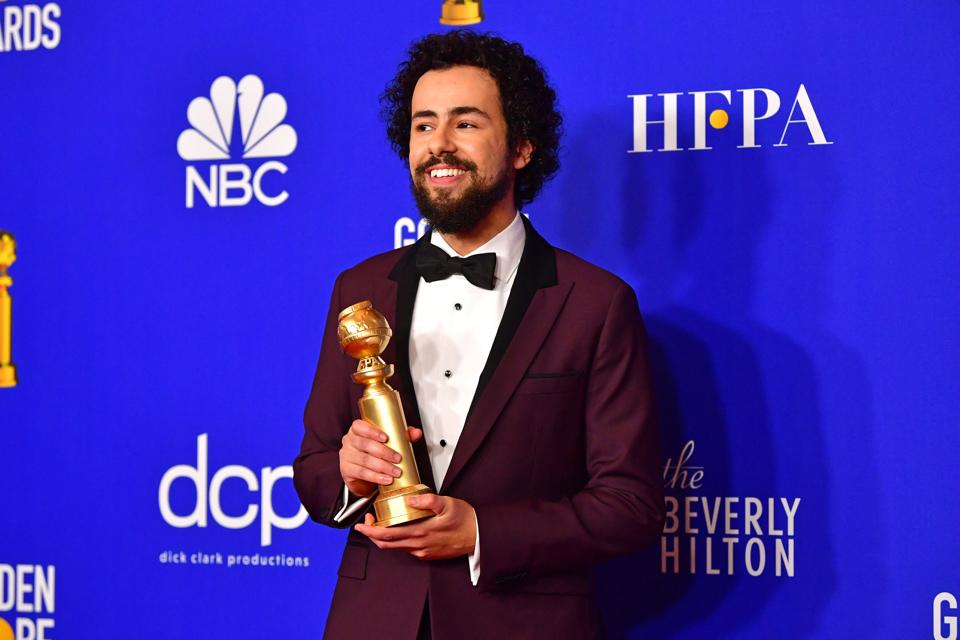 Creator and star of Hulu’s ‘Ramy’, Ramy Youssef was a surprise win for Best Actor in a TV Series, … [+] Musical or Comedy. Photo by Frederic J. Brown / AFP via Getty Images.

The first accolade of the night threw awards watchers for a loop. While it was expected that Barry wouldn’t get the love it deserves from the HFPA, Hader was predicted to. However, Ramy Youssef, the creator and star of Hulu’s Ramy, pulled a surprise win. Though not expected, Youssef’s win wasn’t a total shock. He was the anticipated Dark Horse for the win because of the positive critical praise for his show’s debut season, as well as the HFPA’s penchant for rewarding buzzy, young showrunners in the past (for example, Lena Dunham in 2013). Although the show did not get a best series nomination, he walks away a winner.

Laika and Annapurna Pictures’ Missing Link won the Golden Globe for Best Animated Feature and this is just the third time that a Disney film didn’t take the top honor. Also of note, Missing Link was the only film in its category that wasn’t part of a franchise or a remake of a classic. The Chris Butler-directed film tanked at the box office, earning only $26.2 million U.S. against its $100 million budget. Yet, it beat out hits Frozen 2, How To Train Your Dragon: The Hidden World, The Lion King and Toy Story 4.

The Best Director for a Motion Picture category was one of the tightest of the night with heavyweights such as Martin Scorsese for The Irishman and Quentin Tarantino for Once Upon A Time…In Hollywood. Also in the running were Bong Joon Ho’s highly-praised South Korean film Parasite, as well as Todd Phillips for Joker, which has gotten a lot of buzz due to Joaquin Phoenix’s stunning performance. The Best Director award went to Sam Mendes for his war drama 1917, which has also received a lot of critical praise.

The award for Best Original Score in a Motion Picture went to Hildur Gudnadottir for Joker. This was her first nomination and win. She beat out Alexandre Desplat for the score of Little Women, Daniel Pemberton for Motherless Brooklyn, as well as cousins Randy Newman for Marriage Story and Thomas Newman’s score for 1917. 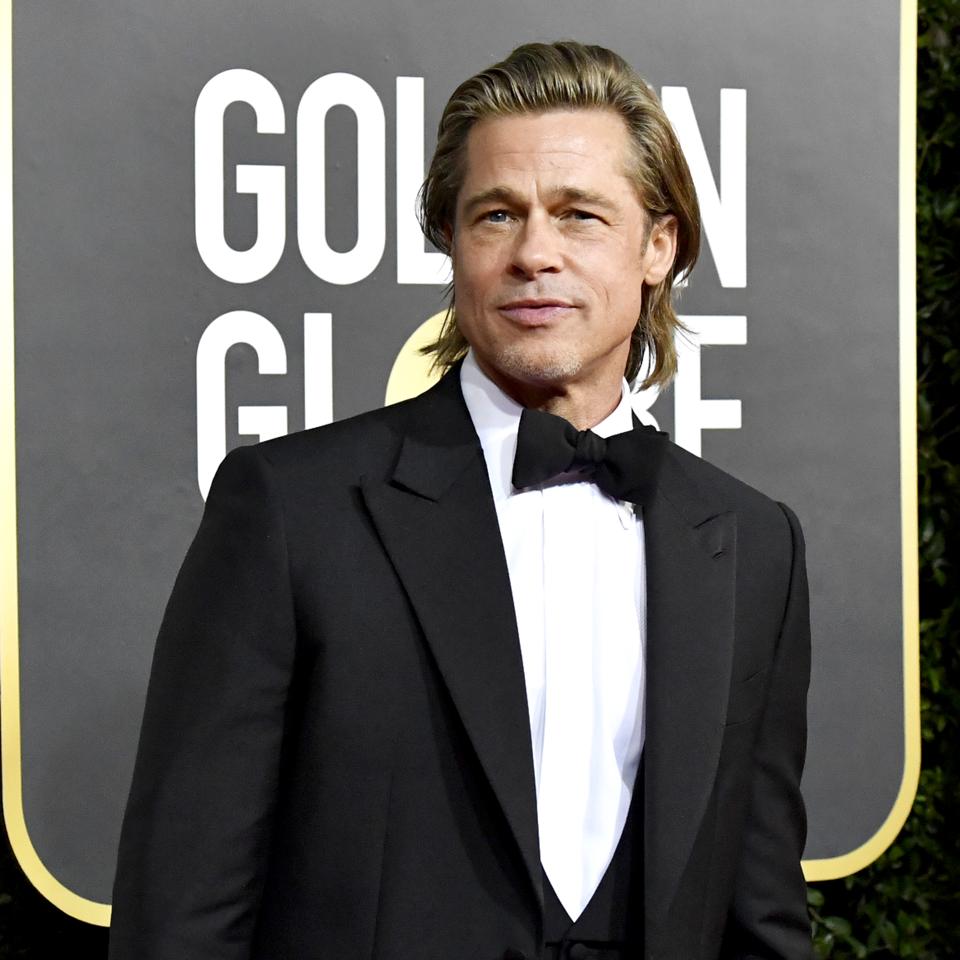 Brad Pitt won the Golden Globe for Best Supporting Actor in ‘Once Upon A Time…In Hollywood’. Photo … [+] by Frazer Harrison/Getty Images.

Brad Pitt won for Best Performance by an Actor in a Supporting Role in a Motion Picture for his role in Once Upon a Time in Hollywood. This was Pitt’s sixth Globe nomination and though he’s received recognition for his work from the HFPA over the years, his only win thus far was in 1996, also in the supporting actor category for Twelve Monkeys. His last nomination was for Best Actor for Moneyball in 2012. 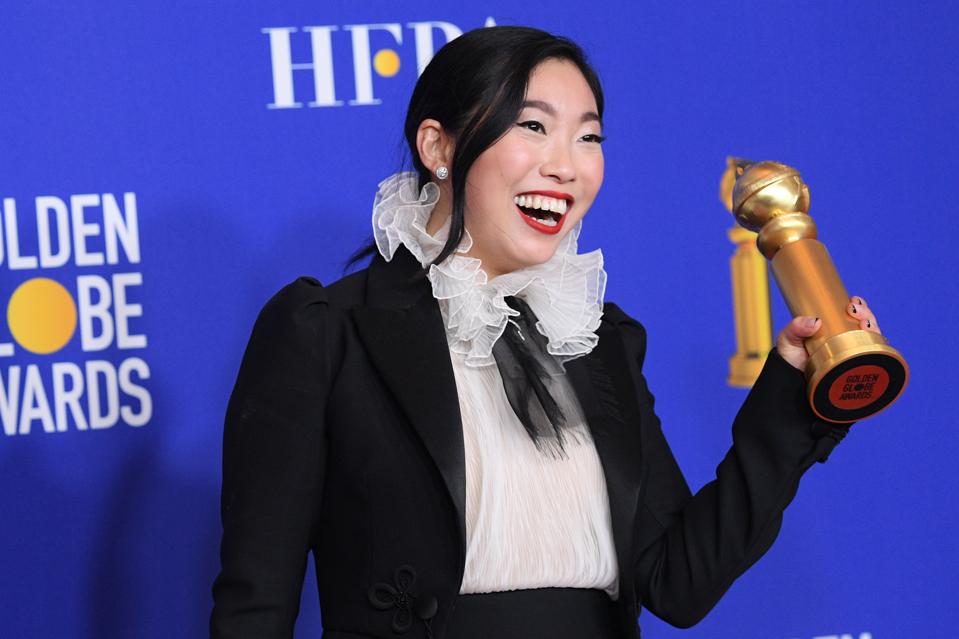 Awkwafina is the first Asian-American woman to win a Golden Globe. She won for her stunning … [+] performance in ‘The Farewell.’ Photo by Daniele Venturelli/WireImage.

Awkwafina won for Best Actress in a Motion Picture, Musical or Comedy and this breaks a record as she’s the first Asian-American woman to win a Golden Globe. Her win wasn’t a total surprise as there has been some serious Oscar buzz swirling around her stellar performance in The Farewell and despite of (or perhaps thanks to?) her snub by the Screen Actors Guild, it was predicted that she would walk away with the award. She had serious competition with competitors Ana de Armas -(Knives Out), Cate Blanchett (Where’d You Go, Bernadette), Beanie Feldstein -(Booksmart) and Emma Thompson (Late Night).

As we have come to learn, nothing is predictable when it comes to the HFPA. Now, we await Oscar nominations!

Here is a full list of Golden Globe winners.