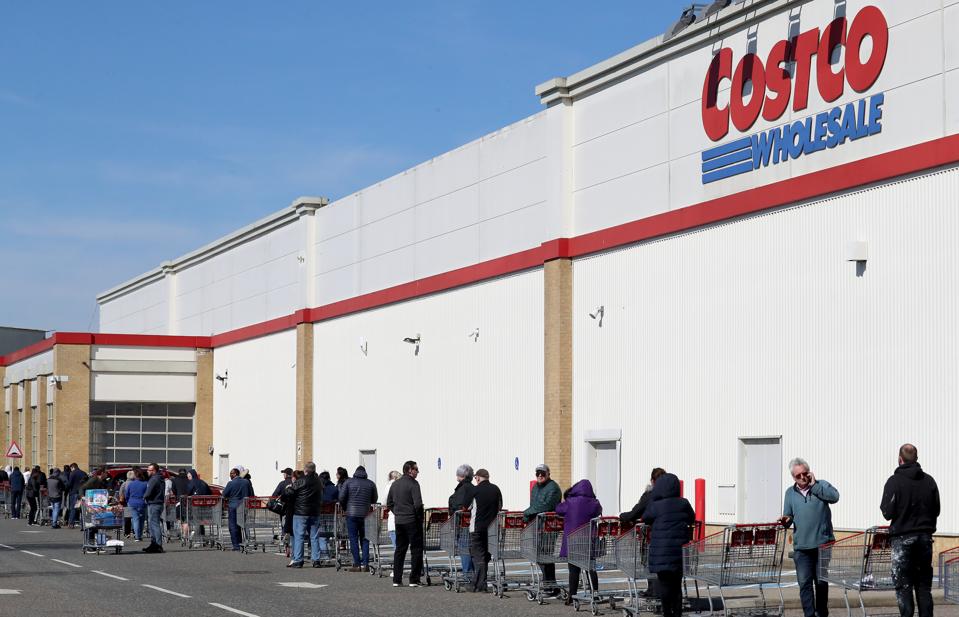 Shoppers queue outside Costco in Thurrock , as Prime Minister Boris Johnson has said the Government … [+] is ready to impose tougher restrictions to curb the spread of the coronavirus if people do not follow the guidance on social distancing. (Photo by Gareth Fuller/PA Images via Getty Images)

It goes without saying that a LOT has been written up about Costco lately. In the days leading up to this moment, Costco has taken center stage and stolen hearts yet again. Once the beacon of luring customers away from their online shopping to get into the store for browsing and sampling while getting bulk stuffs, Costco has pivoted some due to COVID-19. It has removed some of its beloved in-store incentives, but that factoid doesn’t appear to be slowing down consumer demand for Costco right at the moment.

We’ve all seen the headlines: whether it’s people running through the aisles and panic buying more toilet paper and hand sanitizer (heretofore referred to as “hannitizer”) than a small army needs, or pictures of long, snaking lines of shoppers standing the appropriate distance apart from each other hoping to get in, Costco is proving to be one of the unsung heroes of shut-in life for many of us right now.

But one move Costco quietly made hasn’t had as much airtime and it should because it’s about to make the lives of shoppers a little bit better, and further down the road, it seems that it could make shareholders happy as well.. This $1 billion dollar decision is about to change everything. Let’s examine this and see what analysts have to say.

On March 17, Costco announced the acquisition of Innovel Solutions to the tune of $1 billion. This is the first major move like this Costco has made in over a decade. If you haven’t heard of Innovel Solutions, chances are, you’ve benefited from its services at some point in your lifetime. Put simply, Innovel Solutions works in the warehousing, transportation, installation, and delivery services of goods to retail, manufacturing, and commercial customers. Heavy duty items, such as furniture and appliances are often hauled and handled by companies like Innovel Solutions, which has also included Costco as one of its clients since 2015.

Importantly, as noted by Scot Ciccarelli and team at RBC, Innovel Solutions adds a fleet of 1,100 trucks on the road daily, and 11 distribution or fulfillment centers, alongside over 100 “last mile” cross-dock centers to the lineup. This represents coverage capacity for 100% of the zip codes in the United States with 24 to 48 hour delivery services for 85% of households and 93% of all orders.  The acquisition “should help bolster their already fast-growing e-commerce business,” wrote Cicarelli and team.

While the acquisition bolsters delivery and servicing for large items, such as furniture or major appliances, Greg Melich and team at Evercore ISI, noted that the move eliminates third party delivery and installation fees Costco once paid to Innovel. “If tradition holds true, expect most of the savings to be passed onto members to further drive topline,” wrote the team. “Costco’s model of lowering fulfillment cost to sharpen price and then drive more volume has resulted in years of share gain.”

A possible setback to the acquisition crops up in the near-term, according to some analysts, who consider the cost as a potential headwind “We anticipate near-term gross margin rate pressure as a result of the deal,” wrote Melich’s team. “While timing and exact magnitude of dilution are unknown, we don’t believe Innovel was generating a profit prior to the acquisition.”

Despite the growing pains and adjustments that Costco will need to make while transitioning, Oliver Chen and team at Cowen & Co. echoed overall upbeat sentiment on the news of the acquisition, noting it can add to last mile delivery and “white glove” capabilities for larger items that shoppers procure. “We are constructive on this acquisition and believe Innovel’s capabilities will help drive the next leg of Costco’s digital growth as we expect the retailer to focus on larger products, and providing shoppers with best-in-class white glove treatment,” wrote Chen and team.

Other things to consider about Costco in the coming days include taking a look at the calendar. On April 8, the company is expected to report March sales results. Given the COVID-19 related spike in demand for its goods and services, these results are one thing I don’t want to miss.

This Week In Credit Card News: Issuers Are Actually Altering Rewards And Fees To Help Consumers During Pandemic

The Markets Are Plunging…Are You Doing Anything About...

Who Should Decide The Fate Of Digital Banking...

Next: A Bigger Crash?