Breaking
What You And Your RTO Business Need To...
4 SEO Trends for Websites You Should Not...
3 Reasons Why Desk Booking Is Rising In...
8 Tips to Play & Win at Online...
How can software benefit facility management?
Do Professional Casino Players Pay Taxes for the...
Becoming a Trading Expert: What Is the Best...
Dos and Don’ts for B2B Organisations in 2022
Should your business be using Machine Vision?
Colour Masterbatch vs Raw Pigments – Which Is...
Keeping your business moving as you expand online
Top Four Celebrities Who’ve Invested In Cryptocurrency
Why is Cloud Computing Tipped to be the...
How to Raise Money for Non-profit Organizations in...
Choosing the right theme for your WordPress Business...
A Guide to Using Celebrities to Promote Your...
Home Technology ‘Good Knight’ Needs Only One Button And Filipino Lore To Create Fear
Technology

Good Knight is steeped in Filipino mythos. That’s unique for video games, let alone a traditionally-leaning shooter. It’s important to understand the source. One of the developers, Zaid Al-Shaheed, grew up in Iraq, digesting western horror movies. Then he moved to the Philippines, and when looking into local lore, things turned weird.

“You got a reverse Centaur (a man with a head of a horse) called Tikbalang, a Smoking treeman who smokes so much, that creates fog so people get lost in the mountains, and the Aswang which is a traditional Vampire but with a twist where it dislocates its lower body and flies away looking for victims at night,” writes Al-Shaheed, likely trembling at these thoughts while he typed.

Spain colonized the country, wiping out the earliest mythologies and instilling Christian ideals. That created a hodgepodge of sorts, feeding into Good Knight. “We also sprinkled a bit of Asian, Spain mythology… A lot of the story is well researched and written with history majors. Spain and other countries that touched Philippine’s history are a huge part in Philippine folklore,” writes co-developer Alex Valdez. “A big part of the story is the acceptance of Filipinos for our hybrid/mixture of cultures that made modern Filipinos who they are.”

The result is simple – an accessible one-button shooter with vividly dark imagery. The team cites various retro titles like Splatterhouse as inspiration, along with the modern indie hit, Super Hexagon. Initially made during a rapid three-day prototype, full development began around June of 2018, with a major restart in February 2019 to fix things that weren’t coming together. 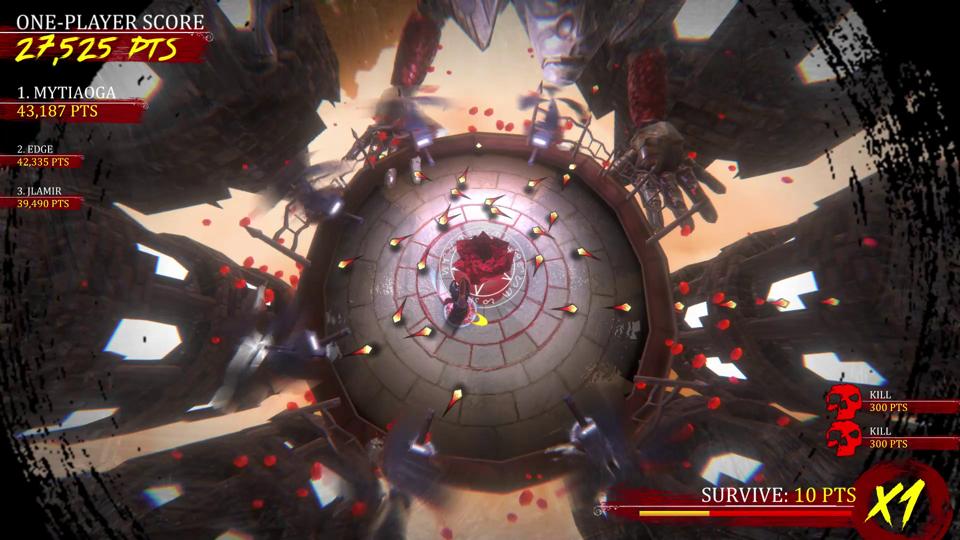 While the Philippines creates a distinctive lore, the indie dev scene there is tougher to find. “Personally it was hard. From 2013 till 2015 I was just freelancing online to get by until I met with Alex and joined their team at the local studio in Baguio City. It was still difficult,” writes Al-Shaheed.

Alex then notes, “We have no connection to the outside countries. Right now we still haven’t found financial help.”

However, what development is there provides Good Knight with a close-knit community to draw from. “Once we got in, it was like riding a boat down a river, the game dev community here is united and extremely supportive,” notes Al-Shaheed. That comes with perks like event organizers offering free spaces, streamers who focus on local games, and various press outlets looking to draw attention to this scene.

The response to Good Knight was so great at events like ESGS, the team even brought back Caravan Events, a five-minute high score run popular in Japan during the classic shooter’s heyday. The old school approach worked, and Good Knight has its audience for an eventual full launch (it’s free in PC early access) on consoles and PC.