Good News For The Cleveland Browns: Myles Garrett Has Been Reinstated By The NFL 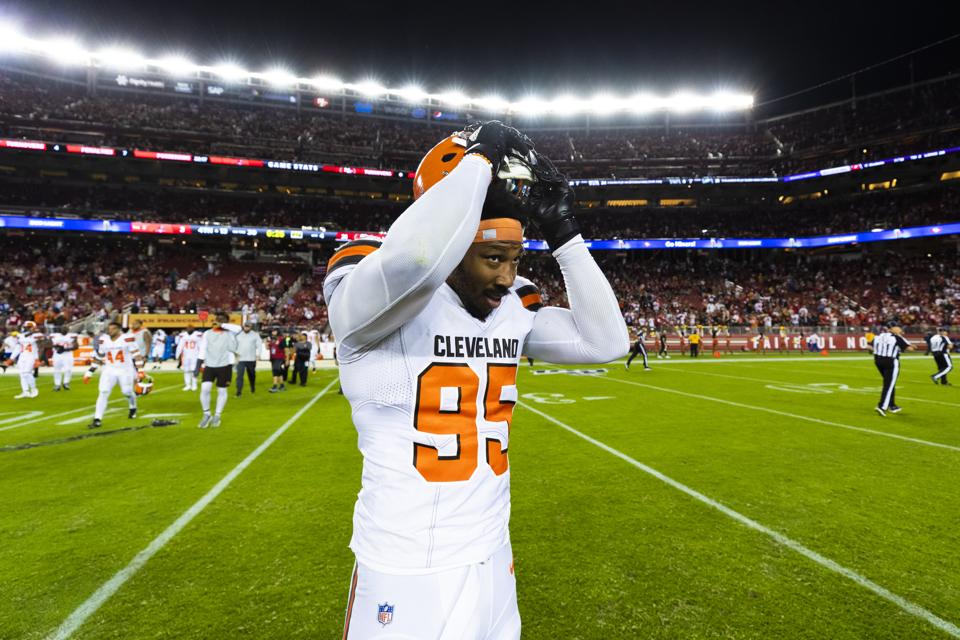 On Wednesday, the Cleveland Browns got some expected, but still important, good news: Myles Garrett is back. In a statement, the team announced that he had been reinstated by the NFL after meeting with the NFL earlier this week. The Associated Press’ Tom Withers broke the story before the official announcement.

“We welcome Myles back to our organization with open arms,” said Browns EVP of Football Operations and General Manager Andrew Berry in a statement. “We know he is grateful to be reinstated, eager to put the past behind him and continue to evolve and grow as a leader. We look forward to having his strong positive presence back as a teammate, player and person in our community.”

Garrett — with a slew of teammates like Jarvis Landry, Baker Mayfield and Denzel Ward celebrating his return on Twitter — posted his own message to confirm the news:

The suspension Garrett received for striking Steelers quarterback Mason Rudolph with his helmet was fair. He was never going to come back during the 2019 season. But getting him back now, and having him around for the offseason and April 6 when the full offseason program begins. It particularly matters for Garrett with a new head coach in Kevin Stefanski and a new defensive coordinator in ex-49ers assistant Joe Woods. He’s going to be vital, and likely the focal point, of whatever the Cleveland defense is going to look like next year.

Before the suspension, Garrett was a legitimate defensive player of the year candidate with 10 sacks in 10 games. Before his suspension, PFF rated him as the Browns’ best player regardless of position. He clearly matters and was clearly irreplaceable. The pass rush just wasn’t the same without him or a fully healthy Olivier Vernon.

If Woods takes any cues from Robert Saleh in San Francisco, Garrett being what he was before the suspension is key to the entire defense working. During the 49ers run to the Super Bowl, it was Joey Bosa, Dee Ford and the rest of the defensive line pushing the defense to its peak. Like Bosa’s role in San Francisco, Garrett can help unlock the rest of that unit and help the likes of Vernon, Larry Ogunjobi and the rest make life easier for the linebackers and the entire secondary.

“I think you want to make sure that you’re putting the guys that you have in the right position to make plays,” Woods said in a press release from the Browns when he was hired. “I know the personnel here is tailored toward a 4-3 scheme, which I’m very comfortable with. We’ll stay with the 4-3 system here and focus on putting the guys in the right positions to make plays.”

Garrett is only 24 and won’t turn 25 until next December — he’s likely to get better from here. He still has a lot of football left to play, a lot of big plays to make to rewrite the defining moment of his career to date. Garrett’s comeback started by getting reinstated.