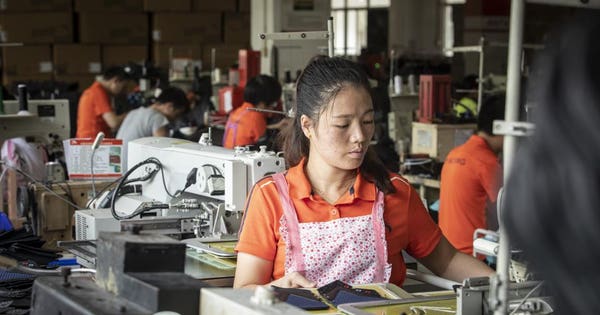 Does having only 40% of your network of more than 10,000 retail shops open for business count as good news or bad?

Stock investors in China sportwear leader Anta focused on the positive after the company said yesterday it had “resumed operation” at about 40% of its stores in mainland China amid the country’s coronavirus outbreak. Anta’s shares rose by 4.6% to HK$71.30 at the Hong Kong Stock Exchange afterward, their highest close in more than three weeks.

Anta “has followed the guidelines and requirements of relevant local government departments and temporarily closed some of the retail stores in certain areas,” the company said in a statement. As of Feb. 14, “nearly 40% of the stores in mainland China of various brands have resumed operation,” with the remainder to be reopened “in accordance with the epidemic situation and local government’s policies.”

Anta notably didn’t say what percentage of its stores it had earlier shuttered in connection with the outbreak, which has left some 1,770 people dead. As of mid-2019, Anta had 10,223 stores in mainland China, according to the company’s interim report. China authorities have been criticized for the initial handling of the spread.

The coronavirus setback comes after a year of brisk growth at Anta. The Fujian-headquartered company last year completed the acquisition of European sportswear titan Amer, whose brands include Salomon and Wilson. Anta teamed up with Tencent, FountainVest Partners and billionaire Chip Wilson, the founder of Lululemon sports apparel, to purchase Amer at a valuation of $5.2 billion. Anta itself placed four billionaires on the 2019 Forbes China Rich List.

Retailers in China – domestic and foreign alike — have been damaged by fallout from the coronavirus. Restaurant chains like Starbucks, McDonald’s and Yum China have been hit, as well as a large number of locally owned ones like Haidilao.

Yet it’s not only Anta’s retailing that’s being hurt. In-house plants suspended operations for two weeks in line with government regulations after the Lunar New Year holidays, and will gradually resume operation only next week, Anta said. “Due to the suspension or limited services of transportation facilities in certain areas, some employees in the affected provinces and cities, especially those in Hubei region, are still unable to return to the production units as planned,” it noted.

“As a result, the productivity of the group’s in-house factories could not achieve normal level and it is expected to take certain time to resume operation. However, it is estimated that the impact of the government’s measures on the epidemic could be temporary, and the group primarily relies on outsource production.” Self-produced footwear was only 34% of its total and self-produced apparel was 12% of the total as of mid-2019, Anta said.

Anta’s factory woes amid the coronavirus outbreak were in line with the results of a new survey published on Monday by the American Chamber of Commerce in Shanghai and word from Apple today its worldwide iPhone supplies were being hurt (see link here).

Anta expects the financial fallout from the coronavirus to hurt for a while. The company “estimates that under the current special circumstances the industry and financial performance of the group will inevitably be affected by the epidemic in the first half of 2020, and expects the recovery will come in the second half of 2020 at the soonest,” Anta said.

Three Things To Do for Art Collectors To...