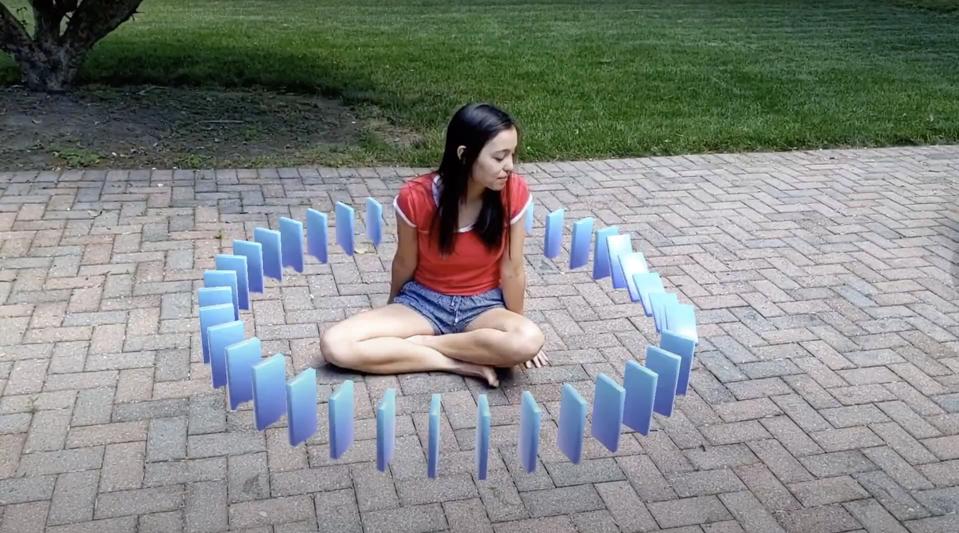 Google Creative Lab has officially released ‘Lines of Play,’ an open-source AR experiment that taps … [+] the functionality of the ARCore Depth API

Last week, Google announced that its ARCore Depth API was being released to the public, which the company had previewed in Dec. 2019.

The Depth API is a groundbreaking integration of artificial intelligence (AI) and augmented reality (AR), using Google’s ‘depth-from-motion’ algorithms to generate a depth map from a single RGB camera.

For years, one frustration of mobile AR development has been achieving realistic depth. Notably, occlusion, the blockage of objects from view when they’re behind others, has been difficult for the simple reason that single cameras don’t see depth the way two human eyes do through stereoscopy, and have trouble processing this information quickly enough to believably integrate augmented objects into the real world. The result is that AR would look believable until someone or something passes “in front” of it…only to get blocked by the augmented object, which is supposed to be in the distance.

As you might guess, this also means that collisions between AR and real-world objects—another feature vital in making AR feel “real”—has also proved elusive.

In short, the Depth API changes all that, without users needing to upgrade to brand new tech like the LIDAR-equipped iPad Pro. But, as the above paragraph indicates, it’s often hard to communicate these ideas in a way that audiences can digest. That’s where creativity comes to the rescue.

In this case, alongside four other apps detailed in the Depth API announcement, Google Creative Lab released Lines of Play, an open-source AR experiment that puts the new capabilities of ARCore on display.

In practice, Lines of Play is an AR domino art creative app. It uses the Depth API to pull depth and geometry information, allowing users to build complex domino art in augmented reality.

Lines of Play broadens how users, well, play with AR. At the moment, if AR isn’t for utility or fine art, face filters on social media and Pokémon GO all but define the mobile AR ecosystem. Lines of Play draws users into the real world, letting them place domino lines throughout their immediate environment using their fingertips.

Immersive content thrives when it offers novel experiences and/or capabilities that aren’t possible in the real world. To that end, geometric placement allows users to quickly add full new lines—and the augmented dominos aren’t bound to their usual small sizes, meaning, for example, that they can be set up at human-scale and crash into parked cars.

Of course, what goes up must come down. It makes sense that the AR dominoes collide with each other, but notably here, they also collide with the world around them, a mechanic that might seem obvious, but is deceptively novel given the computing demands. This means that users can “hide” dominoes behind real-world obstacles and the app will retain the line’s position.

Part of the joy of real-world dominos is the sound of the whole line clacking down. To that end, Lines of Play features spatial audio so that what users hear correlates to the real-world position of the augmented dominos.

The fact that this project is also open-source means that developers can update the game for their particular needs or even integrate the functionality into a totally different app. Furthermore, it introduces developers to ARCore and the Depth API, fast-tracking their capabilities.

Like Just a Line before it, Lines of Play is an innovative new AR offering in the form of a playful creative tool. The app is free on Google Play, and the source code can be found here.