Breaking
Meet George The Poet: Spoken Word Artist Partnering...
Parrot Plumage Color May Be Linked To Body...
Recent Precious Metals Dip A Buying Opportunity
Looking For Venture Capital? Here’s How One 50+...
Growing Your Retirement Money Using 401(k) Dollar-Cost Averaging
Wellness Exec Abby Miller Levy Partners With Venture...
Microsoft Teams Issues Strike To Zoom With Tidal...
What’s Coming For The S&P 500 In October
4 Ways You Can Showcase Empathy With Your...
A $22,000 Microsoft Surface Will Soon Be For...
Zooming In – Should SMEs Invest In The...
iOS 14: The Surprising Security Risk Of Sharing...
How A Break From Lord Sugar Changed The...
Sunday’s Google Doodle Is Actually About Google
Office Of The Comptroller Of The Currency Chief...
Source Code For Multiple Windows Operating Systems Publicly...
Home Technology Google Pixel Buds 2 Have Serious Competition From Microsoft Surface Buds
Technology 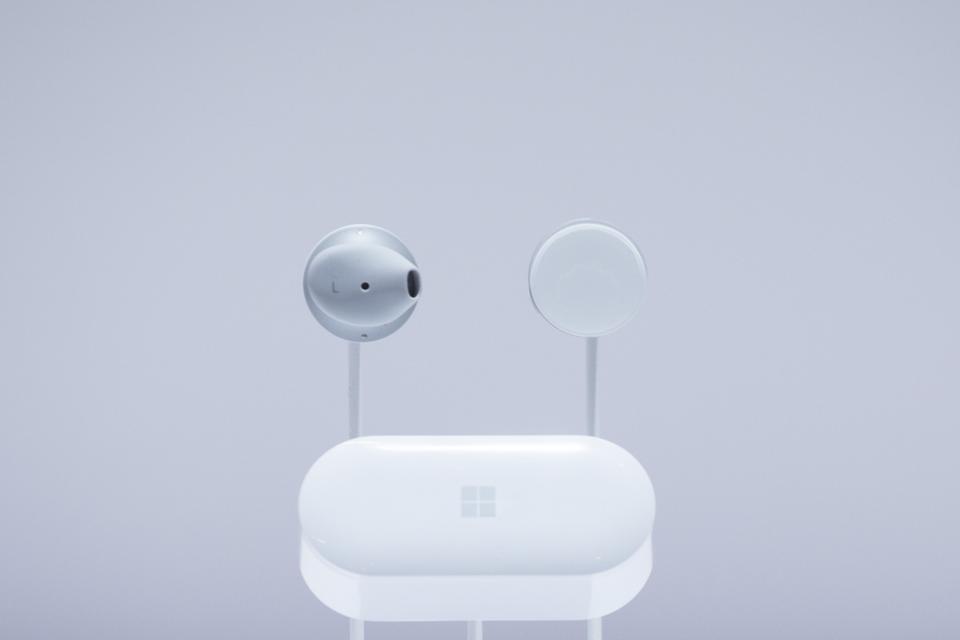 Perhaps it was by chance, or a sign of things to come, but Microsoft’s Surface Earbuds launched with a few unusual – but interesting – features that may challenge Google’s enhanced Pixel Buds.

The first is a transcription-style feature that lets users narrate PowerPoint slides, with their words appearing as live captions on screen. The other is reading aloud your Outlook messages – negating the need to physically interact with your phone to check your emails.

These aren’t groundbreaking advances in wireless earbud technology, and they’re certainly not in the realm of Pixel Bud features like real-time language translation or adaptive sound, but they’re a small window – a brief peek – at what could be.

If I were to bank on any company’s ability to challenge Google’s scruffy haired, wild-eyed, mad-inventor crown – it’d be Microsoft. Google’s Pixel Buds, whilst seemingly fine as earbuds, offer something entirely different: a constantly updated, AI-enriched experience that focuses as much on audio quality as it does tasks and features.

Doesn’t that sound like the kind of thing you’d expect from Microsoft? The company that has made a number of wise productivity-focused decisions that have led to good products and software – from Teams to the highly anticipated Surface Duo. The Earbuds, with these productivity enhancements, fit into that grand plan.

Microsoft tells me that live captioning of PowerPoint slides, reading emails aloud and replying to Outlook emails with dictation (only on iOS) are features that only work on Office 365 products. You won’t be able to listen to your Gmail emails, for example, or provide live captions for Google Sheets.

But Microsoft also didn’t rule out these features crossing over as a future possibility, instead it simply refused to comment on its future roadmap.

Making these features widely available would provide the Pixel Buds with some genuine competition in the ‘smart’ earbuds arena. I imagine the pool of people who will buy Surface Earbuds and make use of their enhanced – Office 365 specific – features is quite small.

But there’s a large cohort of cash-brandishing creatives out there who use a variety of free productivity apps – with questionable data collection practices – who would appreciate a live narration ability. Controlling those same productivity apps with voice controls would be welcome too, I imagine.

It shouldn’t end there for Microsoft. Extending the Surface Earbuds’ abilities is important. Microsoft already has its own real-time language translation service that could challenge the Pixel buds in Skype Translator, which I’m hoping will become a Surface Earbud feature in some form down the line.

Making Cortana accessible with a command rather than a tap, as Google has done with Assistant and the Pixel Buds, seems like an easy win for Microsoft, too. The harder – and vastly more expensive – part is making Cortana as capable as Assistant, which it currently isn’t. But targeted AI features, like the features mentioned earlier, is where Microsoft should be focusing its efforts.

The Surface Duo – Microsoft’s new dual-screen Android phone that will launch later this year – offers other opportunities to smarten up the Surface Earbuds.

Using voice controls to bring up apps, take notes, websites, search for references, find information or even change phone settings on one screen – whilst physically doing something else on the other screen is the definition of multitasking. An advert of doing exactly that would be captivating and would quickly seize the narrative of ‘smart’ headphones in Microsoft’s favour.

Virtually anyone can make a decent pair of wireless earbuds, we know that because everyone has. But the smart extras? The features that go beyond audio quality? Only a handful of companies can do that and Microsoft is one of them. The Surface Earbuds offer a lot of promise for the future and Google should be looking over its shoulder.