Home Finance Government Assistance For The Oil Industry: What Could Go Wrong?
Finance

Government Assistance For The Oil Industry: What Could Go Wrong?

With oil prices crashing and storage filling up, pressure has increased on the government to respond. Some have called for an import tariff, the President had suggested buying oil for the Strategic Petroleum Reserve, and it has even been argued that producers might be paid to keep oil in the ground, the way farmers are sometimes reimbursed for not producing crops when markets are glutted. (Glut being a subjective term.)

Needless to say, support for help for the oil industry breaks down along political and ideological grounds. Liberals tend to oppose any assistance to an industry they dislike; supporting higher taxes when the industry makes good profits, but no assistance when they drown in red ink. Conservatives vary, some wanting to help a strategically important industry, while others oppose interfering in a (somewhat) free market.

In a previous post, I warned against attempting market manipulation as a solution, given the long history of governments failing to understand what ‘correct’ prices are. In this post, the problem of timing and micromanagement.

A criticism of Keynesianism has been that government stimulus money is often so delayed that it arrives when most of the recession has passed. This is clearly not the problem in this instance; the government (and politicians) reacted quickly, although the rollout of the stimulus was not without flaws. Smaller oil companies have apparently received some assistance from the Small Business Administration, but that is relatively minor compared to a drop in revenue of $15 billion a month from lower oil prices.

The figure below shows a rough estimate of the potential change in global oil inventories assuming fairly good compliance with the recent OPEC+ accord and various assumptions about demand trends. The ‘quick and easy’ scenarios appears very improbable, the ‘base case’ is similar to what the IEA published in its latest Oil Market Report, and the ‘severe’ case assumes that economies are very slow to reopen. Only in the severe case do global oil inventories increase by more than 1 billion barrels before beginning to decline; the base case sees a peak in August, only four months away. 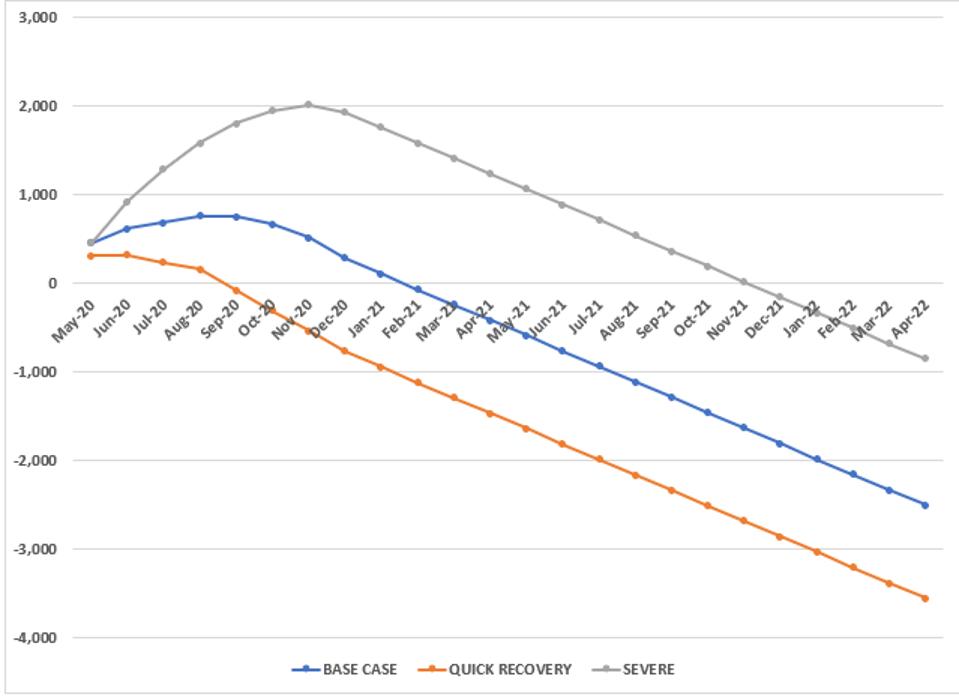 These are guesstimates of course, but if the government (meaning Congress and the Administration) is going to spend months fighting over some form of targeted industry assistance, as opposed to small business and/or payroll loans, it probably will not take effect until the market is beginning to rebalance. The problem is that oil markets are drag racers and policy-makers are somewhere between turtles and glaciers. One story I love concerns the British Government’s decision in World War I to require pubs to close for two hours in the afternoon, so that munition workers would not be tempted to stay away from the factories. That restriction was only lifted after six decades, perhaps because all the munitions workers had passed on.

And politicians love to micro-manage because it allows them to encourage what they consider good behavior and discourage what they dislike. (Think ‘windfall profits tax’ which took about a year to negotiate and, according to a later Congressional Research Service report, “The tax was repealed in 1988 because (1) it was an administrative burden to the Internal Revenue Service (IRS), (2) it was a compliance burden to the oil industry, (3) due to low oil prices, the tax was generating little or no revenues in 1987 and 1988, and (4) it made the United States more dependent on foreign oil.“ Not a sterling success.

Most economists favor the use of taxes and tax breaks to encourage or discourage private behavior, but many politicians like to micro-manage behavior, rarely successfully. My absolute favorite story (especially because I have a visual aid) comes from the Iranian Oil Crisis. The Carter Administration wanted to reduce oil consumption without raising prices. In the course of this, they established building temperature guidelines (remember the President’s fireside chat in a sweater?) and sent inspectors around to certify compliance, that is, measure the temperature in buildings on the day of inspection.

That in itself might seem a bit dumb, but it gets better. I spent many happy years at M.I.T.’s Center for International Studies, then located at 292 Main St. in Cambridge. It was a converted factory building and had extremely poor ventilation, which presumably explains how it passed the inspection and received the Emergency Building Temperature Certificate of Building Compliance, pictured below. (From the Department of Redundancy Department, no doubt.) 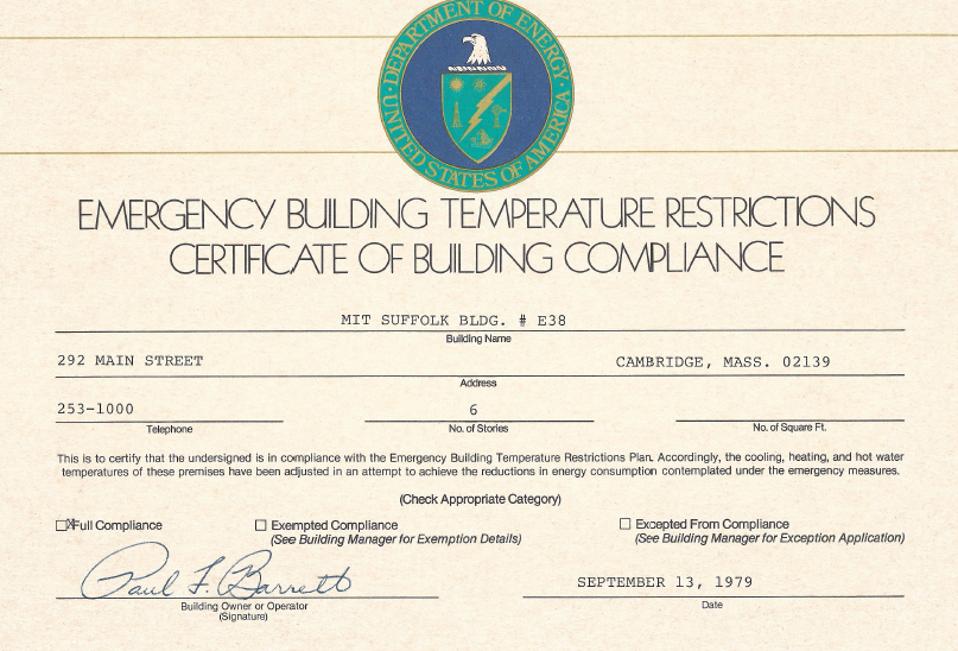 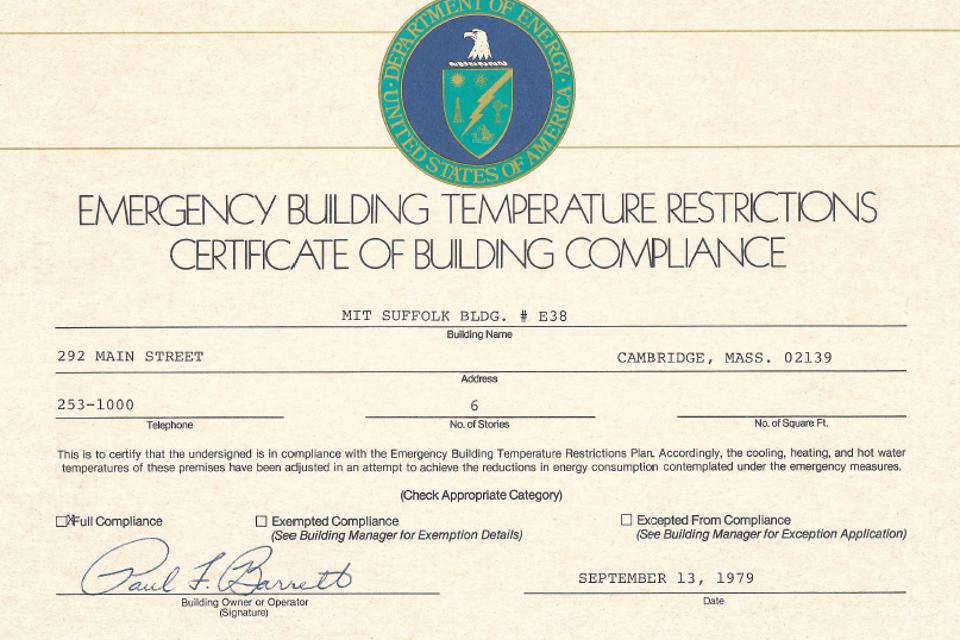 The author from DOE

That the building’s internal temperature met the guidelines on September 13, 1979, says almost nothing about the building’s heating throughout the subsequent winter, let alone whether it was efficient or not. (Hint: not.) It does say a lot about the government’s expenditure of labor in an exercise in futility. The inspectors might have been better employed running on giant hamster wheels to generate power (although I haven’t done the math.)

The story gets better when you ask your humble narrator how he came to be in possession of such a certificate. In fact, the certificate was prominently displayed in the lobby of the building next to the elevators for twenty years, until one day, to paint the walls, workers removed it and left it leaning against a railing, from where some ne’er do well absconded with it. Yes, no one at M.I.T. thought to remove a certificate pertaining to a six month oil crisis for two decades, and it might still be there yet if I hadn’t stolen it (okay, the building was recently torn down).

So, while I have no particular objection to some oil companies receiving government assistance in the current crisis, I also have great fears that the market intervention will prove to be as ineffectual as the many agricultural assistance programs over the years, leaving us with caverns full of oil rather as the Reagan Administration found itself burdened with caverns full of surplus cheese. Oh, wait, too late.

Coronavirus, Trump And Wall Street Are Tearing The...