Breaking
Is An Internet Service Provider Revolution On The...
Why Selecting The Right Chairs And Tables For...
Walgreens Stock Looks Attractive At $35
How To Get CEOs And Board Directors Leading...
Bitcoin And Blockchain Are The ‘Future’ Of Twitter,...
COVID-19 Pandemic Has Birds Changing Their Tune
Beat Zoom Fatigue With These 6 Tips
How To Sustain (Or Sabotage) A Customer Service/Experience...
How, When And Where You Can See A...
New $2.2 Trillion Stimulus Bill Proposed—$1,200 Stimulus Checks,...
Why Do We Do What We Do? Manipulating...
California Brand Goes All-American As Amazon Bans Foreign...
The 3 Best Analytics Companies of 2020
Senator Cory Booker: Supporting Small, Minority-Owned Businesses Will...
Trump’s Taxes Are Finally Leaked—What’s Next?
Washington Heats Up Ahead Of First Presidential Debate:...
Home Business Griezmann Is ‘Isolated’ At FC Barcelona By ‘Jealous’ Teammates, Claims French Media
Business 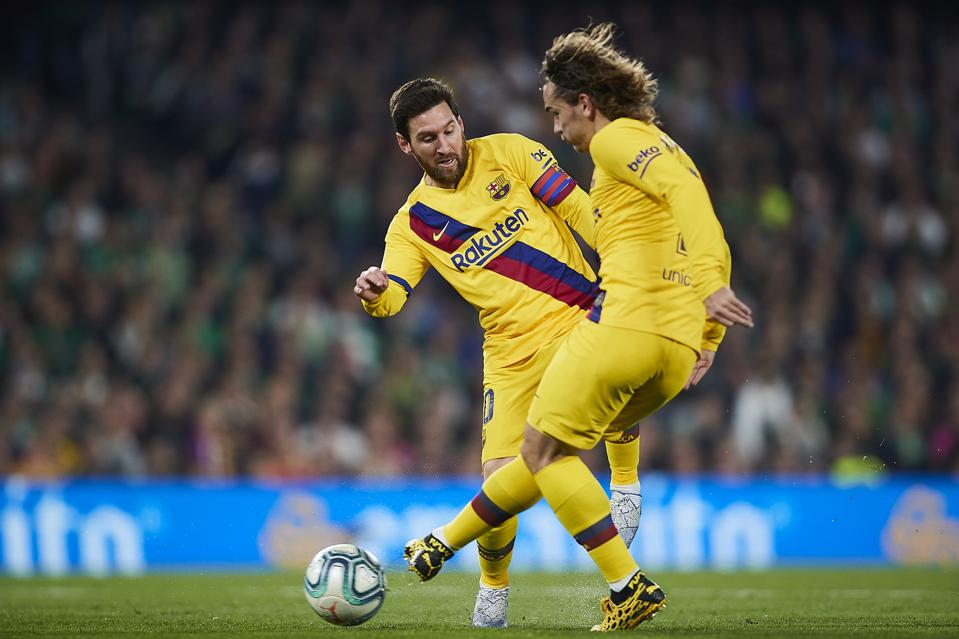 His adaptation to life at FC Barcelona has not been an easy one since moving from Atletico Madrid last summer for a fee of $133mn.

Shoehorned into the left side of the front line with Lionel Messi and Luis Suarez, where the world’s most expensive midfielder Philippe Coutinho struggled and was thrust into exile before him, Antoine Griezmann nevertheless began to thrive once finding his feet as the ‘MSG’ trident became the highest scoring in Spanish football at the close of 2019.

Suarez injured in a Spanish Super Cup semi-final in Saudi Arabia against Griezmann’s former employers Atleti, which proved to be Ernesto Valverde’s last game in charge, the Frenchman has enjoyed mix fortunes since the arrival of Quique Setien in 2020.

Often moved into a more central attacking role, where he enjoyed great success for the Wanda and for the French national team, the 28-year-old has sometimes been the hero, such as when he led a comeback against lowly Ibiza with a midweek brace, but more commonly dropped or out of sorts as teenager Ansu Fati has developed direct chemistry with Messi.

And now, in a sensational report from the Ballon d’Or-awarding France Football, it has been claimed that this has not been helped by how Grizi feels ‘isolated’ at the Camp Nou.

Though he is often the embodiment of positivity with a smile forever planted across is face in public, and was previously found to have indeed won over his colleagues with his humility, France Football alleges that behind closed doors, Griezmann says they are jealous of his 2018 World Cup win with Les Bleus.

Furthermore, if that weren’t enough, it is also alleged that his family on the whole is having problems settling in as the player’s wife Erika “complains to her friends that she has a lack of a social life and misses the capital [city of Madrid]”, something that could force Griezmann to seek a transfer at the close of the current campaign it is added.

Quick to try and put out the fire however, leading Catalan newspaper SPORT has confirmed the validity of the weekly magazine’s bold declarations and says they are total fiction.

“Nothing could be further from reality,” wrote Miki Soria on Tuesday afternoon. “These ‘comments’ do not exist. SPORT has learned that the forward has never spoken with France Football nor has he given them an interview. The comments which he supposedly said have never been said, not even to those closest to him,” it is clarified.

Though Griezmann himself is yet to speak on the matter himself, the news, whether true or not, is bound to become as an embarrassment to a notoriously timid and private figure whose dream it is to win the Champions League.

A fortnight from now, in a tough trip to Napoli in the last 16, he will look to put this controversy behind him by hopefully helping his team continue on the quest to lifting the big-eared trophy in Istanbul.