There is something slightly surreal about holding a conference or a festival based on free speech in a country where such ideals are often theoretical at best. There are risks for organizers too, with the chance that things might backfire.

In the early months of this year, before the spread of the new coronavirus began to make holding any large gathering problematic, both Qatar and the UAE hosted events that were designed to celebrate creativity and freedom and, in both cases, there was a backlash, albeit politely delivered, from those attending.

In Qatar’s case it was an international conference focused on online media, called Social Media: Challenges and Ways to Promote Freedoms and Protect Activists. Held on February 16- 17, it was organised by the National Human Rights Committee (NHRC) in Qatar with the support of the UN High Commissioner for Human Rights and a slew of other prominent organisations, including the European Parliament, the International Federation of Journalists and the Global Alliance of National Human Rights Institutions.

For most of the time, the great unspoken word was Qatar itself, although there were plenty of allusions to it from the stage and some more honest reflections off it. Just a few weeks earlier, Qatar had introduced changes to its penal code, promising five-year terms for spreading ‘fake news’, in a move which drew plenty of criticism at the time from human rights groups.

On the sidelines of the event – which this writer attended at the invitation of the NHRC – other delegates from within the Middle East and beyond acknowledged the curbs on free expression in Qatar, but tended to justify their decision to attend by saying it was “one of the less bad countries” in the region. 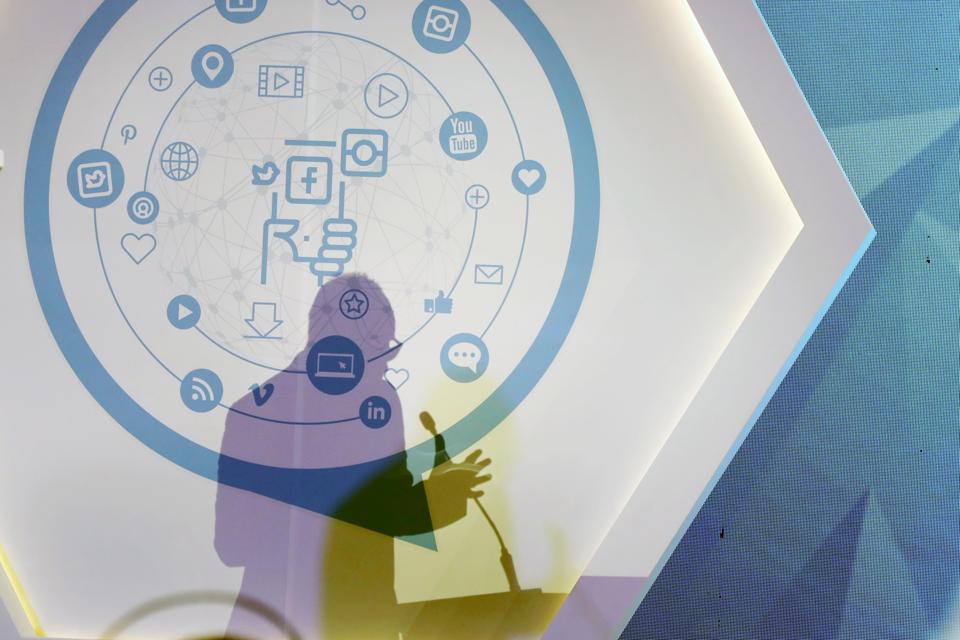 The shadow of a speaker on stage at the Social Media: Challenges and Ways to Promote Freedoms and … [+] Protect Activists conference in Doha, Qatar on February 17, 2020 (Photo: Dominic Dudley)

On stage, speakers tended to be more cautious, picking out other nearby countries such as Egypt or Saudi Arabia or simply referring to the Middle East in general. Jillian York of the Electronic Frontier Foundation, for example, noted that “offline repression is all too often replicated online” and added that “cybercrime laws have in recent years proliferated across the Middle East. These vague laws have been weaponized against poets, activists and others who seek to speak truth to power.”

However, in the same session a journalist from the Doha-based Al-Jazeera network pointed to the “elephant in the room” and, referring to Middle East countries, noted “even the more progressive ones such as Qatar don’t have a perfect record.”

The conference ended with a long list of recommendations, including that states should “repeal any law that unduly criminalizes or restricts expression, both online and offline” and “refrain from establishing laws or arrangements that would require the ‘proactive’ monitoring or filtering of content.” One delegate, speaking off the record, raised doubts about whether such ideals would be adopted by governments in the region, whether in Qatar or elsewhere.

Later in February, the inaugural Hay Literary Festival Abu Dhabi was held, based on the long-running UK event of the same name. More than a dozen human rights groups wrote an open letter to the UAE authorities ahead of the event, urging them to “show their respect for the right to freedom of expression by freeing all jailed human rights defenders.”

Among the concerning cases they cited was that of human rights defender Ahmed Mansoor, who is currently serving a 10-year sentence for social media posts deemed insulting to the country’s leaders.

At the festival itself, Egyptian novelist Ahdaf Soueif also brought up Mansoor’s case during an on-stage conversation. “It is very important that cultural activities and cultural events are not used to paper over the fault lines and the injustices that have meant that they end up in prison,” she said. “I’m of course speaking particularly here of a man who is himself a poet as well as an architect and a very respected activist for human rights and that is Ahmed Mansoor.”

Human Rights Watch praised Soueif’s courage, saying her intervention was “all the more significant because hosting and sponsoring cultural events is exactly how the UAE seeks to whitewash its terrible record on human rights.”

Such events are a key element of the ‘soft power’ narrative that a lot of Gulf countries like to engage in these days. Saudi Arabia at times takes a similar approach. On March 1 it held the 2nd Riyadh International Humanitarian Forum, organised in cooperation with the UN. Mark Lowcock, the UN’s under-secretary-general for humanitarian affairs and emergency relief coordinator, was among those to speak at the event. A few weeks earlier, in mid-February, the UN’s Office for the Coordination of Humanitarian Affairs had described the humanitarian situation in Yemen – where Saudi Arabia has been at war since March 2015 – as “the worst in the world” with some 24 million people – close to 80% of the population – in need of assistance and protection.

Saudi Arabia also appears to view its current leadership of the G20 group of rich and powerful countries as an opportunity to improve its image on the world stage.

The year-long presidency includes multiple side-events and parallel groups, including one for civil society organisations known as the C20, led by Princess Nouf bint Muhammad of the King Khalid Foundation.

In a statement issued on February 21, the C20 said it “observes with great alarm and concern the deteriorating situation of human rights globally” and it called on “all G20 nations to respect the human rights of dissidents, defenders, activists, journalists, researchers and civil society organizations.”

At no point in the statement was Saudi Arabia itself mentioned, despite its own abysmal human rights record. The statement did link through to a report by Civicus on the state of civil society around the world though, which classified Saudi Arabia (and seven other Middle East countries) as “closed”.

Civicus itself is one of several civil society groups that are boycotting the C20 process in Saudi Arabia. Earlier this year they released a statement saying “we cannot participate in a process that seeks to give international legitimacy to a state that provides virtually no space for civil society, and where independent civil society voices are not tolerated.”

The C20 secretariat appears keenly aware of the risks that the whole process might be derailed. A document covering its advocacy strategy, available on its website (pdf), includes a list of 15 possible risks and crisis scenarios during the Saudi presidency, includes C20 participants being denied entry to Saudi Arabia or being arrested or deported once inside the country, outrage on social media, negative media coverage and G20 members refusing to engage with civil society. One of those risks – a boycott of the C20 process by groups concerned about Saudi Arabia’s human rights record – has already come true. Organizers of other similar events will no doubt have similar lists of potential problems.

Trendwatch 2020: The Renaissance Of Brick-And-Mortar Locations As...

Top 25 AI Startups Who Raised The Most...