Breaking
Behind The Curtain—Chapter 11 From The Inside—Chapter 10—The...
Three Classic Ways To Get New Business
With Hope, Perseverance And Faith, Two Friends Are...
Exxon Mobil Shares Cross 10% Yield Mark
T-Mobile for Business BrandVoice: From Sci-Fi To Everyday...
How To Move Your Career Forward By Making...
A Conversation With Jill Houghton, President And CEO...
VW’s Electric ID.4 Lands In Q1 2021 With...
Would Biden Enact Broad Student Loan Forgiveness? These...
Why You Must Slay Your Mindset And Stop...
Surviving The Pandemic With Your Culture Intact: How...
The Disruption Of The Consulting Industry Is Here
Remote 101: How To Create Meaningful Connections For...
How To Reassess Your Finances To Align Your...
7 Things Every Entrepreneur Should Automate
Volkswagen’s Truck Unit Ties Up With TuSimple On...
Home Business H-1B Visa Selection Completed: Will All Companies Follow Through?
Business 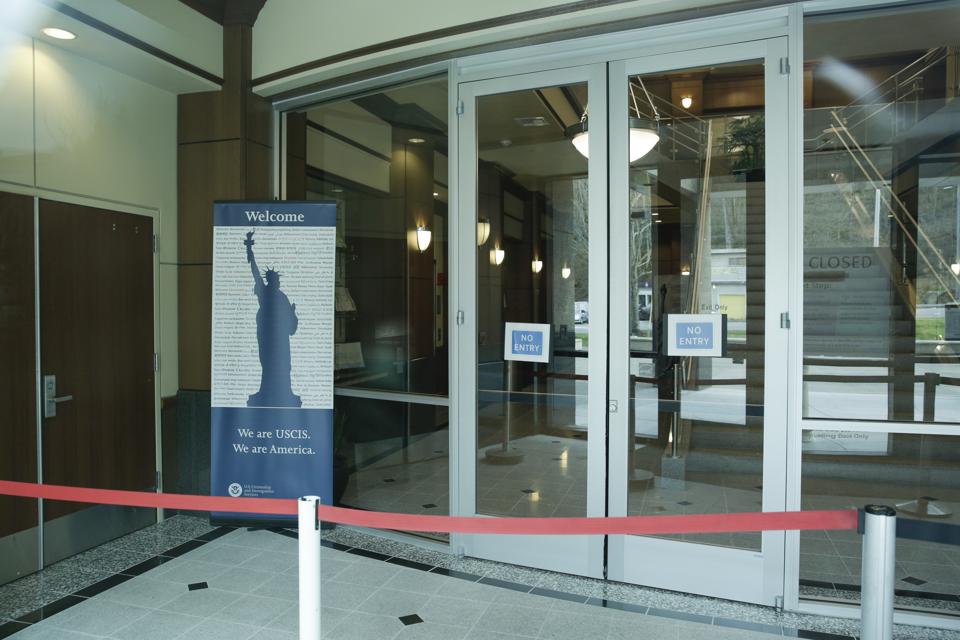 An empty entrance is posted following a closure of a Department of Homeland Security (DHS) building … [+] and U.S. Citizenship and Immigration Services (USCIS) field office in Tukwila, Washington. (Photo by JASON REDMOND/AFP via Getty Images)

U.S. Citizenship and Immigration Services (USCIS) announced it has received sufficient electronic registrations to reach the FY 2021 numerical limit and has notified all employers whose H-1B registrations were selected. Under the new system, those companies whose registrations were chosen must prepare and submit applications (and have them approved) to receive H-1B petitions. What does history tell us about how many companies will follow through with their applications in light of the current economic downturn?

On January 31, 2019, the Department of Homeland Security (DHS) finalized a regulation for a new process to submit H-1B petitions and conduct the H-1B visa lottery. A lottery has been used for the past several years due to the large number of H-1B applications (over 200,000 last year) submitted beyond the 65,000-annual limit and the 20,000 advance degree exemption from the limit for new H-1B petitions each year. (In practice, the annual limit is 85,000.)

In the past, employers sent USCIS completed applications and supporting materials to apply for H-1B petitions. The new regulation changed that process. Employers will now send in completed applications only after a petitioner (the employer) registers electronically for a beneficiary (the potential H-1B employee) and after the agency has selected that beneficiary in the H-1B lottery.

History provides a guide to the current situation, with strong evidence that H-1B visas are market-driven: Demand for H-1B visas declines when the economy slows down but increases when economic conditions are good. In short, companies hire the workers they need or project to need. That means some companies whose registrations for H-1B professionals were selected may decide not to submit H-1B applications.

In October 2000, Congress passed the American Competitiveness in the 21st Century Act, which temporarily raised the annual limit on new H-1B petitions to 195,000 for Fiscal Year (FY) 2001, 2002 and 2003. Did companies use all the H-1Bs available during those years? No, they did not.

A recession began in March 2001, though the recession was not officially recognized until November 2001, notes economist Arturo Gonzalez. The economy later weakened further. “Consumer confidence, one of the barometers of present and future economic prospects, was especially adversely affected after the terrorist attacks of September 11,” according to Gonzalez.

Here is what happened during the years covered by the American Competitiveness in the 21st Century Act:

Today, economists would point out the economic impact of coronavirus has not affected all sectors equally. The companies hardest hit are airlines, hotels and restaurants, none of which have been significant employers of H-1B professionals.

The 20 employers with the most approved H-1B petitions for initial employment in FY 2019 all had strong technology components to their business, such as Amazon, the top H-1B recipient in FY 2019, according to a National Foundation for American Policy analysis. (See also here.)

“Due to coronavirus and the economy, I have doubts whether all employers will follow through with their applications,” said Vic Goel, managing partner of Goel & Anderson, in an interview. “Still, it is likely the supply of H-1B visas will be exhausted due to pent-up demand and the inability to hire an individual on an H-1B throughout the course of the year.”

As a result of the low annual limit and current USCIS procedures, employers can only register to petition for a new H-1B professional once a year, in March.

Timing is also an important factor. As recently as March 9, 2020, Donald Trump still downplayed the impact of coronavirus, tweeting: “So last year 37,000 Americans died from the common Flu. It averages between 27,000 and 70,000 per year. Nothing is shut down, life & the economy go on. At this moment there are 546 confirmed cases of CoronaVirus, with 22 deaths. Think about that!”

Shortly after Trump’s tweet, the stock market began to decline, with the Dow Jones Industrial Average falling more than 17% during the week of March 16th. Since then, company stock prices have somewhat recovered from recent lows, though it has varied by sector.

“I think there is going to be a lag because registration opened on March 1 and the full economic impact of coronavirus didn’t reveal itself until weeks later,” said Dagmar Butte, a partner at Parker, Butte & Lane, in an interview. Butte points out there is a low barrier to register this year compared to the past when employers needed to complete an entire H-1B application, as opposed to basic information about an employee and the position under the new system.

Under the regulation, a company whose registration is selected has 90 days to file an application, unless USCIS extends the filing period. If a company’s application is rejected or not sent to USCIS, then the regulation indicates the agency will select another registration until the 85,000-annual limit is reached.

USCIS has not released the number of registrations it received for FY 2021. One indication of the number is that approximately 201,000 H-1B applications were submitted for the FY 2020 H-1B cap, which was well above the 85,000-annual limit.

First, even companies that follow through on all their selected registrations will still use far fewer H-1B petitions than originally intended, likely half in many cases, since due to the 85,000-annual limit USCIS will not select many of a company’s registrations. The annual limit on H-1B visas is small for a country the size of the United States. The 85,000 new H-1B petitions allowed each year come to only 0.05% of the U.S. labor force of approximately 164 million.

Second, a new H-1B professional cannot begin working in H-1B status for another 6 months, until October 1, 2020, or even later if USCIS takes longer to approve the petition. That means an evaluation of the expected economic situation 6 or 12 months from now may be a factor for companies. Even among the larger employers of H-1B professionals, new H-1B visa holders represent only a small percentage of a company’s new hires each year, according to interviews with companies.

Third, many U.S. companies file petitions for H-1Bs to secure long-term employment for international students working for the company on Optional Practical Training (OPT). An H-1B petition generally remains the only practical way for high-skilled foreign professionals, including recent international students, to work long-term in the United States. (The majority of H-1B visa holders have a master’s degree or higher.)

Fourth, at U.S. universities, U.S. students represent only about 20% of the full-time graduate students in computer science and electrical engineering, and there remains a long-term need for technical talent in the United States.

Given the likely number of registrations received by USCIS, it is reasonable to assume the 85,000-annual allotment will be reached. The lottery comes only once a year and companies, including those less damaged by recent events, may look to a time when the economy returns to normal. Still, we should not expect that all registrations selected will result in new H-1B visa holders working in the United States.

30,000 More Coronaviruses Wait To Be Unleashed By Deforestation And Climate Change